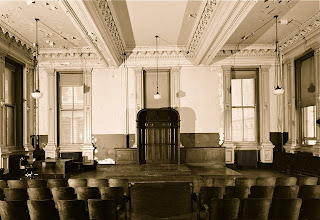 I’ve so far been unable to find any cases in which a court has addressed whether someone has a 4th Amendment expectation of privacy in content loaded onto a MySpace or Facebook page.

I have, though, found a recent New York state case in which a court addressed the issue of whether content on MySpace or Facebook is private in a more generic sense. So while it’s a civil case and doesn’t address any 4th Amendment issues, I decided to go ahead and do a post on it.

Steelcase obviously needs to negate some or all of Romano’s claims of permanent injuries and consequent detrimental impact on her ability to participate in certain activities and/or her enjoyment of life. In any civil lawsuit, including this one, the parties engage in “discovery.” As Wikipedia explains, in U.S. law, discovery

is the pre-trial phase in a lawsuit in which each party through the law of civil procedure can request documents and other evidence from other parties and can compel the production of evidence by using a subpoena or through other discovery devices, such as requests for production of documents, and depositions.

While it was investigating Romano’s claims, Steelcase learned that she had Facebook and Myspace pages. Romano v. Steelcase, Inc., supra. Steelcase may, or may not, have, asked her for the ability to access the pages; I can’t tell exactly what happened from the only opinion I have. But I know Steelcase sought the court’s help in gaining access to this information. At the beginning of the opinion, the judge notes that

Defendant Steelcase moves this Court for an Order granting [Steelcase] access to [Romano’s] current and historical Facebook and MySpace pages and accounts, including all deleted pages and related information upon the grounds that [Romano] has placed certain information on these social networking sites which are believed to be inconsistent with her claims in this action concerning the extent and nature of her injuries, especially her claims for loss of enjoyment of life.

sought to question [Romano] at her deposition regarding her MySpace and Facebook accounts, to no avail and following those depositions, served [her] with a Notice for Discovery & Inspection requesting, inter alia, `authorizations to obtain full access to and copies of [her] current and historical records/information on her Facebook and MySpace accounts.’ [Romano] has refused to provide the requested authorizations.

Romano v. Steelcase, Inc., supra. So Steelcase asked the court to order her to comply.

The court began its ruling on Steelcase’s motion by noting that under § 3101 of New York’s Civil Practice Law and Rules, “there shall be full disclosure of all non-privileged matter which is material and necessary to the defense or prosecution of an action.” Romano v. Steelcase, Inc., supra. The court explained that the “material and necessary” standard “is to be interpreted liberally requiring disclosure of `any facts bearing on the controversy which will assist preparation for trial by sharpening the issues and reducing delay and prolixity’”. Romano v. Steelcase, Inc., supra. The court noted that each civil

discovery request is to be decided on a case-by-case basis keeping in mind the strong public policy in favor of open disclosure. . . . If the information sought is sufficiently related to the issues in litigation so as to make the effort to obtain it in preparation for trial reasonable, then discovery should be permitted. . . . It is immaterial that the information sought may not be admissible at trial as `pretrial discovery extends not only to proof that is admissible but also to matters that may lead to the disclosure of admissible proof’. . . .

Plaintiffs who place their physical condition in controversy, may not shield from disclosure material which is necessary to the defense of the action. . . . Accordingly, in an action seeking damages for personal injuries, discovery is generally permitted with respect to materials that may be relevant both to the issue of damages and the extent of a plaintiff's injury . . . including a plaintiff's claim for loss of enjoyment of life. . . .

Romano v. Steelcase, Inc., supra. In ruling on Steelcase’s motion, the court began by explaining that Facebook and Myspace are both

social networking sites where people can share information about their personal lives, including posting photographs and sharing information about what they are doing or thinking. Indeed, Facebook policy states that `it helps you share information with your friends and people around you,’ and that `Facebook is about sharing information with others.’ Likewise, MySpace is a `social networking service that allows Members to create unique personal profiles online in order to find and communicate with old and news friends;’ and, is self-described as an `online community’ where `you can share photos, journals and interests with your growing network of mutual friends,’ and, as a `global lifestyle portal that reaches millions of people around the world.’ Both sites allow the user to set privacy levels to control with whom they share their information.

Romano v. Steelcase, Inc., supra. The judge then explained that the information Steelcase sought regarding Romano’s Facebook and MySpace accounts was both

material and necessary to the defense of this action and/or could lead to admissible evidence. . . . [I]t appears that [Romano’s] public profile page on Facebook shows her smiling happily in a photograph outside . . . her home despite her claim that she has sustained permanent injuries and is largely confined to her house and bed. [Given] that the public portions of [Romano’s] social networking sites contain material that is contrary to her claims . . . , there is a reasonable likelihood that the private portions of her sites may contain further evidence such as information with regard to her activities and enjoyment of life, all of which are material and relevant to the defense of this action. . . .

The Canadian court noted that “it is reasonable to infer from the social networking purpose of Facebook, that even if a person only maintains a private profile with the public profile merely listing their name, that relevant information exists on their limited-access private pages”. Romano v. Steelcase, Inc., supra. The Canadian court also commented that to permit a party

claiming very substantial damages for loss of enjoyment of life to hide behind self-set privacy controls on a website, the primary purpose of which is to enable people to share information about how they lead their social lives, risks depriving the opposite party of access to material that may be relevant to ensuring a fair trial.

And in his closing comments, the judge explained that because neither Facebook nor MySpace “guarantee complete privacy, [Romano] has no legitimate reasonable expectation of privacy. . . . MySpace warns users . . . that their profiles and MySpace forums are public spaces and Facebook's privacy policy” explains that when someone posts information on Facebook, “this information may become publicly available.” Romano v. Steelcase, Inc., supra. The judge found that when Romano created her accounts, she consented

to the fact that her personal information would be shared with others, notwithstanding her privacy settings. . . . Since [Romano] knew her information may become publicly available, she cannot now claim she had a reasonable expectation of privacy. As recently set forth by commentators regarding privacy and social networking sites, given the millions of users, `. . . privacy is no longer grounded in reasonable expectations, but rather in . . . wishful thinking.’

Since this is a civil discovery case, this court’s holding and comments regarding expectations of privacy in sites like Facebook and MySpace doesn’t constitute any kind of precedent as to 4th Amendment privacy . . . but the logical and rationale might be used to argue that there is no 4th Amendment expectation of privacy in social networking sites.

Posted by Susan Brenner at 1:27 PM

I don't see how there could be a 4th Amendment expectation of privacy. You are handing over your information to a 3rd party, so I do not think it would be any different than your telephone records.