Browser Windows and the 4th Amendment 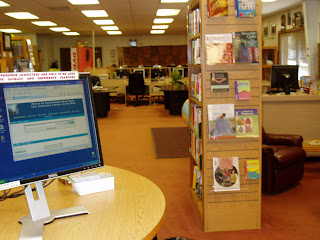 This post is about a Kentucky case in which a man who was using a library computer to browse child pornography wound up being indicted on federal charges. If you’d like to read a little more about the facts in the case, check out the news story you can find here.

On August 7, 2009, [Kenneth L.] LaPradd was at the University of Louisville Art Library using a public desktop computer. [The computers are in the lobby of the library, have unfiltered access to the internet, and are available for public use.] LaPradd was known to the library staff, as he frequently used the public computers and had been the subject of several complaints to the staff regarding a number of pornographic images other library patrons had seen on his computer terminal. In previous conversations with the University of Louisville Police Department (`ULPD’) about the patrons' complaints concerning LaPradd, the library's staff had been advised to call the ULPD when he next appeared at the Art Library. Upon sighting LaPradd on August 7, the library staff contacted the ULPD.

Following their arrival at the library, several ULPD officers observed LaPradd before approaching him. The officers were able to see that LaPradd was looking at pornographic images, but could not be certain whether the images constituted child pornography. At some point before the officers approached him, LaPradd minimized the internet browser windows on the computer screen, effectively concealing from the officers what he had been viewing. Officer David James of the ULPD eventually walked up to LaPradd, introduced himself as a police officer, and asked him if he would step outside the lobby of the library and speak with him. LaPradd agreed that he would.

During the conversation between Officer James and LaPradd outside the library lobby, other officers of the ULPD inspected the computer previously occupied by LaPradd. When they maximized the internet browsing windows, the officers discovered a number of pornographic images of children.

LaPradd was taken “to the ULPD office and interviewed” by Detective Jewell. U.S. v. LaPradd, supra. LaPradd waived his Miranda rights and told Jewell that while using the library computers he had “connected to internet sites containing images of nude children under the age of 18, saving a number of images on his thumb drive, and that he had images of children engaged in sexual acts in his apartment.” U.S. v. LaPradd, supra. LaPradd consented to a search of his apartment; the officers who conducted the search found, as the news story noted above explains, more images of child pornography on his home computer. U.S. v. LaPradd, supra.

Based on all this, LaPradd was indicted on two counts of violating 18 U.S. Code § 2252A by receiving and possessing child pornography. U.S. v. LaPradd, supra. He then moved to suppress the evidence arguing that

(1) Officer James's pre-arrest seizure of LaPradd at the Art Library was unlawful (2) there was no probable cause to arrest LaPradd for violating the child pornography laws of Kentucky and (3) the officers' search of the library computer, specifically maximizing the internet browser windows during LaPradd's conversation with Officer James, constituted an illegal, warrantless search in violation of the Fourth Amendment.

As to the first issue, the district court judge explained that the 4th Amendment prohibition on unreasonable seizures bars a law enforcement officer from “seizing” a person unless the officer does so pursuant to a valid warrant or exception to the warrant requirement. U.S. v. LaPradd, supra. The court noted that under the 4th Amendment, a “seizure” occurs during a citizen-police encounter “only if, in view of all the circumstances surrounding the incident, a reasonable person would have believed he was not free to leave.” U.S. v. Mendenhall, 446 U.S. 544 (1980). The judge found LaPradd was not seized at the library because (i) the officer asked him if he would step outside and he agreed; (ii) the officer made no attempt to restrain LaPradd from leaving the area; and (iii) nothing in the facts showed that the officer was “forceful or aggressive” in dealing with LaPradd. U.S. v. LaPradd, supra.

As to the second issue, the judge found that the officer did, in fact, have probable cause to arrest LaPradd. U.S. v. LaPradd, supra. The Supreme Court has held that probable cause exists when “he facts and circumstances within” an officer’s knowledge and of which he/she has “ reasonably trustworthy information” are “sufficient to warrant a prudent man in believing that the [person to be arrested] had committed or was committing an offense.” U.S. v. LaPradd, supra; Brinegar v. U.S. 338 U.S. 160 (1949). The district court judge explained that

LaPradd's confession to Officer James that he had been looking at child pornography on the computer and had pornographic images of children on his thumb drive provided sufficient probable cause for LaPradd's arrest. That Officer James was uncertain exactly what the images portrayed or if they comported with the child-pornography prohibitions under Kentucky law at the time of the arrest is irrelevant given LaPradd's direct and unambiguous confession.

And that brings us to the third issue, the one I found interesting enough to do a post on this case. LaPradd argued that the officers’ maximizing the browser windows on the library computer constituted a 4th Amendment “search” that was unreasonable because it was neither conducted pursuant to a valid search warrant nor pursuant to an applicable exception to the search warrant requirement. U.S. v. LaPradd, supra.

So, for the officers’ maximizing the browser windows to be a 4th Amendment search, LaPradd would have had to have subjectively believed he had a 4th Amendment expectation of privacy in the minimized windows and society would have to accept that belief as objectively reasonable. In the Katz case, Charles Katz used a phone booth to carry out gambling in violation of federal law; the FBI figured out what he was doing and put a bug, a wiretapping device, on the outside of the phone booth so they could record the conversations Katz held in the phone booth. Katz v. U.S., supra. Katz argued that he had a 4th Amendment expectation of privacy in the conversations, and the Supreme Court agreed. The Court found that Katz subjectively believed the conversations were private and that his belief was one society, at the time, accepted as objectively reasonable . . . that, after all, was the whole purpose of having phone booths with doors that could be closed to reduce the likelihood of anyone’s overhearing a conversation.

I don’t know how LaPradd (or, more accurately, LaPradd’s attorney) constructed the argument that he had a 4th Amendment expectation of privacy in the minimized browser windows because I don’t have access to the briefs in the case. All I have is this opinion. My guess, though, is that it went something like this: By minimizing the browser windows LaPradd demonstrated that he considered the information they contained to be “private” and this put the officers on notice that the windows were, in fact, “private” under the Katz test.

Whatever the argument was, it didn’t work:

LaPradd did not have a subjective expectation of privacy using the public computers at the Art Library. The computers are located in the lobby of the library and in plain view of the patrons and staff. Indeed, that other patrons saw LaPradd viewing pornographic images indicates just how little privacy is afforded those who use the Art Library's public computers. Additionally, access to the computers appears to be granted at the library staff's discretion, illustrating that LaPradd had ultimately no control over whether he could use the computer, and consequently could not have expected any privacy as to his computer-related activities. Finally, the internet sites to which the computer terminal was connected did not contain personal information relevant to LaPradd, such as an email account; instead they were generally accessible to all with a computer and the internet, and therefore LaPradd had no expectation of privacy in viewing those particular sites.

U.S. v. LaPradd, supra. I think this judge is right, at least in terms of the fact that it was a public computer over which LaPradd had no control and his use of which was exposed to other patrons in the library. I’m not sure I agree with the reasoning about the Internet sites which he had accessed, i.e., that there’s a difference between sites that contain my personal information and sites that don’t, insofar as the issue we’re dealing with is concerned.

I wonder if a court would reach the same conclusion if the minimized browser windows were on a privately-owned laptop being used, say, by a student in a classroom or by someone using a laptop in an airport . . . would it matter that the person owns the laptop? . . . or does the fact they are using it in a public place trump any expectation of privacy that might derive from personal ownership of the computer?

Just curious as to how you find these cases. My guess is that you have a westlaw search set-up, but with what search terms?

I have several Westlaw searches set up, with a variety of terms. One focuses on basics (e.g., computer, laptop e-mail, web-site, etc.), another on Twitter (because I keep waiting for it to come up more in cases), another on encryption, etc.

Actually, though, I tend to find the more interesting cases by doing manual searches . . . which is a pain given that a halfway broad Westlaw search for computer-related terms tends to bring up around 10,000 cases . . . which means I try to figure out how to find new and interesting issues in that morass of cases.

Thanks for the excellent post and starting a good discussion.

I have some comments up on my blog, as well: