The "Reasonable Continuation Rule" and Computers 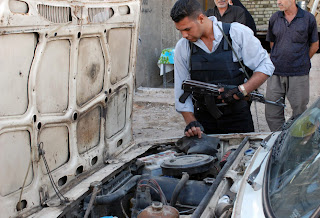 As I’ve noted before and as I assume everyone already knows, the 4th Amendment creates a right to be free from “unreasonable” searches and seizures and, in so doing, creates a default preference for having searches and seizures conducted pursuant to a warrant: a search (and seizure) warrant. This post essentially deals with how long the authorization granted by a particular search warrant lasts.

In State v. Speers, 2010 WL 2176083 (Arizona Court of Appeals 2010), the defendant, Phillip Speers argued, in part, that evidence against him should be suppressed because officers seized two computers belonging to him and (i) searched them at the time they were seized, in 2000 and (ii) searched them again in “late 2004 or early 2005,” without obtaining a new warrant. State v. Speers, supra. As I noted in an earlier post on this case, Speers was convicted on various counts in 2003, the convictions were set aside and then he was re-tried, which is the case this opinion deals with.

In appealing the second conviction, Speers argued that “the reexamination [of the computers] without a warrant was an unreasonable search and seizure” under the 4th Amendment. State v. Speers, supra. In his appellate brief, Speers claimed that while Arizona courts hadn’t directly addressed this issue, “other jurisdictions have held that `a warrant is executed when a search is conducted, and its legal validity expires upon execution,` so that `after execution, no additional search can be undertaken on the same warrant.’” Appellant’s Opening Brief, State v. Speers, 2009 WL 872350 (quoting State v. Trujillo, 95 N.M. 535, 624 P.2d 44 (1981)). I don’t have access to the prosecution’s brief in this appeal, so I can’t do justice to what they argued; according to Speers, the prosecution’s brief said that “[s]earch warrants are only required to seize or examine evidence in the first instance’”. Appellant’s Opening Brief, supra.

I found that an interesting argument since I, for one, had never seen any cases that address this issue. So I decided to look into it. I didn’t find any reported cases that address the issue in the context of computer searches, but I did find a few cases that deal with the “reasonable continuation rule.” So I thought I’d do a post on how that rule has been applied to traditional, physical searches and then speculate a bit about how it might, or might not, apply to computer searches.

In Search and Seizure: A Treatise on the Fourth Amendment (Thomson West 2009), Wayne LaFave, a respected expert on the 4th Amendment, explains that when “the purposes of the warrant have been carried out, the authority to search is at an end.” LaFave, Search and Seizure, supra. He notes that “a warrant may be executed only once” but then goes on to point out that “if a particular warrant execution has not yet ended and not all the described items have been found, it is permissible for the police to retrace their steps and search more carefully areas searched earlier.” LaFave, Search and Seizure, supra. LaFave explains that “[u]nder this `reasonable continuation rule’” there are two requirements that must be met if a subsequent search under the same warrant is to comply with the 4th Amendment: (i) the subsequent entry must “`be a continuation of the original search’”; and (ii) the decision to conduct a “`second entry to continue the search must be reasonable under the circumstances’’’. LaFave, Search and Seizure, supra (quoting U.S. v. Keszthelyi, 308 F.3d 557 (U.S. Court of Appeals for the 6th Circuit 2002)).

The Keszthelyi court cited this case as a good example of when the reasonable continuation rule would apply to authorize a subsequent search under the original warrant:

In [U.S. v. Bowling, 351 F.2d 236 (U.S. Court of Appeals for the 6th Circuit 1965)], . . . the police worked until midnight to copy all the serial numbers of the suspect items, and then checked the serial numbers overnight to determine whether the property was stolen. When they left the suspect's home, the police possessed a basis for believing that contraband remained in the residence, but chose to suspend the search until those suspicions could be confirmed. It seems apparent from these facts that the original search was not completed until the police were able either to dispel or confirm their suspicions about the equipment following a check of the serial numbers. Thus, the second entry was properly characterized as a continuation of the original search.

Moreover, the decision to suspend the search and return later if the equipment proved to be stolen was unquestionably reasonable. A more intrusive alternative existed that could have obviated the need for multiple entries-i.e., the police could have seized all of the equipment in the defendant's residence at the time of the initial search and checked it at their leisure. Nevertheless, when presented with circumstances which complicated their *ability to execute fully the warrant at the time of the initial entry, the police in Bowling made a reasonable decision to execute the warrant in a manner that required two entries, but also minimized the risk of undue interference with any legitimate property interest that the defendant may have had in the equipment.

In Gerber, officers executed a warrant to search the defendant's vehicle on a Friday, but did not look under the hood on that day because they were unable to locate the lever to open the hood. Instead, the officers waited until the following Monday, at which time they were able to secure the assistance of a mechanic in opening the hood without damaging the vehicle. The Eleventh Circuit concluded that the search under the hood of the vehicle performed on the following Monday -- at which time the original warrant had expired-was a reasonable continuation of the original search. The court emphasized the fact that the decision to suspend temporarily the search until a mechanic was available was a reasonable one in the face of an `unexpected obstacle’ to the completion of their search.

The real issue is whether, and to what extent, the reasonable continuation rule applies to computer searches. In the Speers case, the Arizona Court of Appeals rejected Speers’ argument that the subsequent search of his computers violated the 4th Amendment:

A `search’ under the Fourth Amendment occurs “when an expectation of privacy that society is prepared to consider reasonable is infringed.’ . . . . When items are lawfully seized and then examined by the police, a subsequent examination by a law enforcement officer does not result in a constitutional violation because of the reduced expectation of privacy in the items. . . . Thus, `once an item in an individual's possession has been lawfully seized and searched, subsequent searches of that item, so long as it remains in the legitimate uninterrupted possession of the police, may be conducted without a warrant.’ U.S. v. Burnette, 698 F.2d 1038 (U.S. Court of Appeals for the 9th Circuit 1983). As the Burnette court explained,

We believe our decision here is fully consistent with our prior decisions and with the policies underlying the Fourth Amendment's warrant requirement. Requiring police to procure a warrant for subsequent searches of an item already lawfully searched would in no way provide additional protection for an individual's legitimate privacy interests. The contents of an item previously searched are simply no longer private.

State v. Speers, supra. Speers had argued that “computers should be treated differently from other evidence for Fourth Amendment purposes `because they are able to hold a library's worth of personal information,’ citing U.S. v. Walser, 275 F.3d 981 (U.S. Court of Appeals for the 10th Circuit 2001)”. State v. Speers, supra. The Arizona Court of Appeals found that it didn’t need to address this issue because it concerned

the scope of a permissible search of a computer. In contrast, Speers is not asserting the State was attempting to obtain evidence from the computers outside of the category of evidence described in the warrants authorizing the first examination of the computers. Instead, he is asserting the State should have obtained a new warrant before reexamining the computers. Because the second examination, regardless of when it occurred, did not infringe on any reasonable expectation of privacy Speers had in the computers, the State did not need to obtain a new warrant before the reexamination.

The Arizona Court of Appeals therefore applies the reasonable continuation rule to the searches in the Speers case even though they involved subsequent “entries” and searches of personal property, rather than home at issue in Burnette and the vehicle at issue in Gerber. (I guess a vehicle is personal property, but since it’s a lot larger than a computer I’m not sure Gerber directly applies to the issue we’re addressing.)