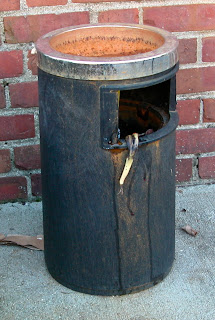 I wondered how, if at all, courts are dealing with attorneys, witnesses and/or spectators who show up with cell phones that haven’t been turned off . . . so I did a little research to see if anyone had been sanctioned for such conduct.

My assumption was that if someone is to be sanctioned, the court would have to use its contempt power, a power I discussed in an earlier post.

I found a few reported cases, two of which we'll examine here.

While attending a juvenile court proceeding, Michelle McRoy's cell phone rang, drawing the attention of the presiding judge. Ms. McRoy was asked by the court why her phone was not turned off as the court instructed at the commencement of the proceedings. Ms. McRoy explained that she had turned her phone off as directed. However, while in court, she loaned the phone to her sister who went outside to make a call and returned the phone to her without turning it off. Ms. McRoy admitted that she did not check whether the phone was off when her sister returned the phone. Apparently viewing this conduct as contumacious, the trial court found Ms. McRoy in direct criminal contempt, forfeited the cell phone, and ordered the Orange County Sheriff's Department to destroy it.

McRoy v. State, supra. (This news story says the judge threw the phone “into a garbage can”, after which court personnel retrieved it and may “still have it.”)

As Black’s Law Dictionary explains, criminal contempt is an

Black’s Law Dictionary (8th ed. 2004). In Bloom v. Illinois, 391 U.S. 194 (1968), the Supreme Court held that criminal contempt “is a crime in the ordinary sense; it is a violation of the law, a public wrong which is punishable by fine or imprisonment or both.” The issue in Bloom was whether criminal contempt “is a crime to which the jury trial provisions of the Constitution apply.” Bloom v. Illinois, supra.

We hold that it is, primarily because in terms of those considerations which make the right to jury trial fundamental in criminal cases, there is no substantial difference between serious contempts and other serious crimes. Indeed, in contempt cases an even more compelling argument can be made for providing a right to jury trial as a protection against the arbitrary exercise of official power. Contemptuous conduct, though a public wrong, often strikes at the most vulnerable and human qualities of a judge's temperament.

contempt (such as an assault of a testifying witness) committed in the immediate vicinity of a court; esp., a contempt committed in a judge's presence. A direct contempt is usu[ally] immediately punishable when the transgression occurs.

recital of those facts underlying the charged contempt upon which the adjudication of guilt is based. This requirement cannot be dismissed as merely a technical requirement. . . . Purely conclusory statements will not meet the requirement of a recitation of facts. For example, citing the contemnor's `unjudicious, unethical and intemperate conduct before the court” is insufficient. See Ray v. State, 352 So.2d 110 (Florida Court of Appeals 1977). Here, neither the written order nor the oral pronouncement of the court recited evidentiary facts supporting the finding of contempt. In its entirety, the substantive portion of the contempt order provides: `Michelle McRoy was found guilty of contempt of court. Cell phone is forfeited and to be destroyed by the Orange County Sheriff's Office.’ The trial court's oral statements at the contempt proceeding were equally lacking in specificity. This alone would require reversal for the entry of a proper order.

The other case involves an attorney: Nicolle Phair was representing a defendant in a criminal trial when, “[d]uring the State’s examination of its first witness, [her] cellular phone rang.” State v. Phair, 193 N.C. App. 591, 668 S.E.2d 110 (N.C. App. 2008). The judge apparently didn’t say anything at the time, but at the end of the trial entered an order finding Phair in direct criminal contempt in violation of North Carolina General Statutes § 5A-11 for bringing “into the courtroom a cellular telephone which rang audibly . . . while the court was in session”. State v. Phair, supra.

The order said letting the phone ring “constituted grounds for contempt because the acts . . . were intentionally done in open Court, which interrupted the proceedings of the Court and impaired the respect due its authority.” State v. Phair, supra. It also directed Phair “to forfeit her cellular telephone in order for it to be destroyed or to pay a $100.00 fine within 10 days” of the order. State v. Phair, supra. Like McRoy, Phair appealed.

In reviewing her case, the North Carolina Court of Appeals noted that North Carolina General Statutes § 5A-11 states that, among other behaviors, the following actions

State v. Phair, supra. The court also noted that under the statute willfulness “means an act “done deliberately and purposefully in violation of law, and without authority, justification, or excuse.” State v. Phair, supra (quoting State v. Chriscoe, 85 N.C. App. 155, 354 S.E.2d 189 (1987)). It also noted that the term had been defined as “`more than deliberation or conscious choice; it also imports a bad faith disregard for authority and the law.’” State v. Phair, supra (quoting Forte v. Forte, 65 N.C. App. 615, 309 S.E.2d 729 (1983). The Court of Appeals then held that the evidence did not show that Phair acted willfully in allowing the cell phone to ring during court:

Although defendant admits that she knew from years of practicing law that she should turn her cell phone off while court is in session, it seems clear that defendant merely made a mistake in not turning her cell phone off before entering the courtroom. While this was certainly irresponsible, we cannot say that defendant exhibited a `bad faith disregard’ for the trial court's authority; indeed, rather than `more than deliberation or conscious choice[,]’ defendant's actions here -- or rather her inaction -- seem to constitute less than conscious choice.

These are the two reported cases I found that really address the cell-phone-contempt situation. There’s a 2004 case from Georgia – Coleman v. State, 269 Ga. App. 827, 605 S.E.2d 424 (Georgia Court of Appeals 2004) – in which a fellow was held in contempt after his cell phone range while the court was in session. Thomas Coleman had gone to traffic court to “contest a traffic citation” and had not turned off his cell phone, though “[i]t was announced that everyone in the courtroom was to turn off all cell phones.” Coleman v. State, supra.

The judge told the bailiff to confiscate Coleman’s cell phone, Coleman refused to give it to the bailiff, the judge held Coleman in contempt and then told him again to give his cell phone to the bailiff, but Coleman refused, “leaving the courtroom instead.” Coleman v. State, supra. The judge sent the “courtroom deputy” after Coleman and once he was brought into court, the judge held him in contempt and sentenced him to “365 days probation, a $200 fine and 100 hours of community service”, though the probation was later eliminated. Coleman v. State, supra. The Georgia Court of Appeals reversed the judgment of contempt because it found the trial judge had “sentenced Coleman without giving him an opportunity to speak or explain why he should not be held in contempt.” Coleman v. State, supra.

These cases at least inferentially indicate that an appellate court isn’t likely to uphold a summary criminal contempt conviction for what seems to have been an inadvertent failure to turn off a cell phone . . . but I, for one, wouldn’t want to assume the risk of having to find out what an appellate court would do with such a conviction.