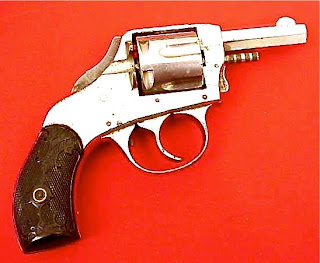 This post is about a recent decision from the Court of Appeals of Arizona: State v. Damper, 2010 WL 711802 (2010). Marcus Damper was convicted of second-degree murder in the death of his girlfriend, nineteen-year-old Cartina Vega. You can read a brief summary of the facts in the case and see photos of Damper and Vega here.

This is how the Court of Appeals summarized the facts in the case:

Damper shot and killed C, his girlfriend, while she lay on the bed in their Glendale apartment in the late morning of January 21, 2008. Damper and Christopher Barron, who also lived in the apartment, were preparing to attend a Martin Luther King, Jr. Day event that morning.

Throughout the morning, Damper and C. had argued because C. did not want Damper to go to the event; she was worried Damper's ex-girlfriends might attend and also feared violence might break out at the event.

At 11:21 a.m., C.'s friend, B., received a text message from C.'s cell phone. B. answered C.'s text with two of her own, but did not receive any message in return. Shortly thereafter, Barron, shaving in the bathroom, heard a gunshot. When he stepped out of the bathroom, he saw Damper, who frantically told him C. had been shot. Barron picked up a handgun lying on the bedroom floor and told Damper they needed to leave the apartment. The two fled in Damper's car. In a vain hope that C. might have survived the shooting, Damper told Barron to dial C.'s cell phone as they headed away. A call was made from Barron's cell phone to C.'s cell phone at 11:24 a.m. that day; three other calls from Barron to C.'s phone followed shortly thereafter. . . .

At trial, Damper testified the shooting was accidental. He explained that to show C. how he would defend himself if violence broke out at the King Day event, he had picked up a .45-caliber pistol from atop the stereo in their bedroom. According to Damper, he thought the pistol was empty, but it went off accidentally. The State's forensic pathologist testified C. was killed by a gunshot to the head fired from a distance of approximately two to three feet. He also testified that C. had suffered recent bruising to her neck and exhibited `hemorrhages in the membranes over the inside of the eyelids and eyeballs’ consistent with `compression of the neck by an external force, maybe a hand or fingertips.’

Damper was charged with second-degree murder and misconduct involving weapons; the jury convicted him of both charges, and he appealed . . . raising only a single issue. State v. Damper, supra. Damper claimed the trial judge “erred by admitting in evidence a text message by the victim in violation of his rights under the Confrontation Clause” of the 6th Amendment “and contrary to Arizona Rules of Evidence 403, 801 and 901.” State v. Damper, supra. This is how the Court of Appeals described the text message at issue:

The text message to B. the morning of the shooting was written `part in Spanish and text lingo.’ B. and a Glendale police detective who viewed the message after the fact translated it as, `Can you come over? Me and Marcus are fighting and I have no gas.’

The 6th Amendment's Confrontation Clause says that “in all criminal prosecutions, the accused shall enjoy the right . . . to be confronted with the witnesses against him.” It gives defendants the right to cross-examine witnesses against them, the rationale being that cross-examination is the best way to test the truth of a witness’ testimony. Damper based his Confrontation Clause argument on the U.S. Supreme Court’s decision in Crawford v. Washington, 541 U.S. 35 (2004). As Wikipedia explains, the Crawford Court

held that testimonial statements by witnesses who do not appear at trial may not be admitted unless the witness is unavailable and there has been a prior opportunity for cross examination. Crawford limits the application of the confrontation clause to hearsay statements. Hearsay statements are out-of-court assertions offered as proof for the truth of the matters asserted. The central issue is whether the hearsay evidence is testimonial. If the out-of-court statement is testimonial, the prosecution cannot use it as . . .evidence unless the declarant is unavailable and the defendant has had a prior opportunity for cross-examination. If the statement is non-testimonial, the Confrontation Clause simply does not apply. The Supreme Court did not define `testimonial.’

The Court of Appeals noted that while the Supreme Court did not define “testimonial statement”, it noted that “testimony” means a

`solemn declaration . . . made for the purpose of . . . proving some fact.’ . . . Statements taken during a police interrogation are testimonial for purposes of the Confrontation Clause when `there is no . . . emergency, and . . . the primary purpose . . . is to establish or prove past events potentially relevant to later criminal prosecution.’ As the Court explained in Crawford, `An accuser who makes a formal statement to officers bears testimony in a sense that a person who makes a casual remark to an acquaintance does not.’ On the other hand, a statement to the police is nontestimonial when `the primary purpose . . . is to enable police assistance to meet an ongoing emergency.’

because there was a previous domestic violence incident between himself and C, the text was a testimonial message to B. that C. intended as a record of the argument she and Damper had the morning of the shooting. More generally, he contends that because a text message `is a purposeful document typed by hand by the author over the course of some time,’ a text message is by nature testimonial.

We conclude the text message was not a testimonial statement. Whether it was an urgent cry for help or a more casual request to a friend, nothing in the message or its context suggests C. intended or believed it might later be used in a prosecution or at a trial. . . . Nor do we agree . . . that text messages are by nature necessarily testimonial. Like any other form of communication, a text message may be testimonial or non-testimonial, depending on the circumstances and purpose for which it is made. Because the content and circumstances of the text at issue here demonstrate C. did not send it for `the purpose of establishing or proving some fact,’ the message was non-testimonial.

Damper next claimed the text was hearsay, which was inadmissible under Rule 802 of the Arizona Rules of Evidence. State v. Damper, supra. As I’ve explained, hearsay is an out of court statement which is offered to prove the truth of the matter asserted; as I’ve noted, hearsay is inadmissible unless it falls within certain exception to the rule barring the use of hearsay. The default rule barring the use of hearsay is, as I’ve noted, based on the fact that the person who made the out of court statement isn’t available to be cross-examined which undermines the opposing party’s ability to test the reliability of that statement.

The Court of Appeals noted that the text was “plainly” hearsay because it was “an out-of-court statement offered by the State to prove the truth of the matter asserted, i.e., that C. and Damper were fighting shortly before the shooting.” State v. Damper, supra. It also found that the trial court did not err in finding that the text was admissible under the “present sense impression” exception to the rule barring hearsay:

A statement falls within the present-sense impression exception to the hearsay rule if it `describe[s] or explain[s] anevent or condition [and is] made while the declarant was perceiving the event or condition, or immediately thereafter.’ . . . The exception is based on the notion that `substantial contemporaneity of event and statement’ negates the likelihood of fabrication or misrepresentation. . . . In other words, we assume `that when the declarant has had little time to reflect on the event she has perceived, her statement will be spontaneous and therefore reliable.’

The text message at issue described an event, an argument between C. and Damper, perceived by the purported speaker, C, as evidenced by the statement, `Me and Marcus are fighting.’ Additionally, the speaker's use of the present tense, `are fighting,’ suggests she sent the message either during her fight with Damper or shortly thereafter.

State v. Damper, supra. So the Court of Appeals also rejected that argument.

Damper then argued that the text message hadn’t been authenticated. I discussed the need to authenticate evidence and how one court approached the authentication of text messages in a recent post, so I won’t go into all that in detail here. If you want to know more about authentication, check out that post; basically, it means that for the State to have the text admitted into evidence, it had to show it was what it was claimed to be, i.e., was a text from the victim, C. The Court of Appeals also rejected this argument:

Sufficient evidence exists from which the jury reasonably could have concluded the text message . . . was . . . sent by C. At trial, B. testified she and C. often communicated with text messages. She explained that she had saved C.'s cell-phone number in her own cell phone, denominated by a nickname, and that when the text message at issue arrived the morning of the shooting, her phone displayed that nickname as the sender of the message. . . . Damper argues anyone with access to the apartment he shared with C. could have sent the message. But C.'s cell phone was found on the bed beside her body after the shooting, and Damper points to no evidence indicating that anyone other than C. used the phone that morning.

Finally, Damper claimed that admitting the text violated Arizona Rule of Evidence 403, which says evidence “may be excluded if its probative value is substantially outweighed by the danger of unfair prejudice”. The Federal Rules of Evidence have an identical provision, as, I believe, do all the states. Damper claimed the text was unfairly prejudicial because it “`strongly suggested’ he and C. had a `violent argument’ just before her shooting” and he shot her “`in a fit of passion.’” State v. Damper, supra. He also argued that the text’s probative value was “slight because it did not suggest an argument of great significance.” State v. Damper, supra. Again, the Court of Appeals did not agree:

Damper has made no showing . . . that the message had any tendency to cause the jury to decide his case based on . . . emotion, sympathy or horror. . . . Furthermore, the message had significant probative value. Sent at 11:21 a.m., the message tended to show C. and Damper argued immediately before the shooting, which must have occurred prior to Barron's call to C.'s phone at 11:24 a.m ., thereby supporting the State's theory that Damper shot her intentionally.

The Court of Appeals therefore affirmed Damper’s conviction, leaving him to serve the concurrent (i.e., to be served simultaneously) sentences of 18 years (on the murder charge) and 4.5 years (on the weapons charge). Appellant’s Opening Brief, State v. Damper, 2009 WL 4027054.