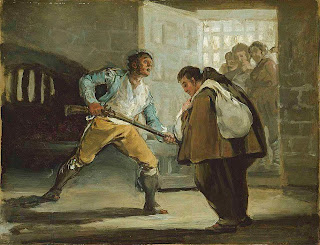 As I explained in an earlier post, U.S. courts use the concept of “true threat” to distinguish speech that is protected by the 1st Amendment from threats, which aren’t constitutionally protected. (I also explained why we criminalize threats and what constitutes a “true threat,” if you’re interested.)

At trial, the State called one witness, Maryland State Police Sergeant Adam Stachurski, who was assigned to the Homeland Security Intelligence Division. Stachurski testified that, shortly after 7:30 a.m. on March 18, 2008, [Abbott] sent an e-mail from his home computer to a State website maintained by the Office of the Governor. The website solicited feedback in the following format:


Contact Governor O'Malley
We'd like to hear from you.
Whether you're a citizen of Maryland or just visiting our great state, your comments and suggestions are welcome.
Please use the form provided below to tell us what you think. Your feedback is valuable--it gives the Governor and his staff useful information that helps improve our service to all Marylanders.
Be sure to include your E-mail address so a response may be provided. You should receive an electronic acknowledgement [sic] shortly after sharing your comments.

Thanks for taking the time to contact the Governor's Office of Maryland. Come again!
-Martin O'Malley, Governor


The website included fields for personal information about the individual composing the message. Select fields required that all characters be capitalized. The content of the message was limited to 4000 characters . . . .


The commentator's name was requested in four categories (prefix, first, last, and suffix). [Abbott] typed his name as `FUCK Walter Carl Abbott YOU.’ He provided his actual address and phone number in the appropriate fields. Under the category for `Organization Name,’ [Abbott] typed `FUCKING SOLD OUT AMERICAN,’ and he identified his relationship to this organization as `president.’ . . . The text of his electronic message was as follows:


O'Malley, getting ready to lose my wife after 24 years of marri[a]ge. 3rd construction co. & 2nd house I am going to lose because of no good fucking government like you and pieces of shit like you. If i[sic] ever get close enough to yoy [sic], I will rap [sic] my hands around your throat and strangle the life from you. This will solve many problems for true AMERICAN'S [sic]. Maybe you can send your MEXICAN army after me, you no good AMERICAN SELL OUT PIECE OF SHIT. I HOPE YOU DROP DEAD BEFORE I GET TO YOU, I WOULD HATE TO TO [sic] LOSE MY LIFE BECAUSE OF A PIECE OF SHIT LIKE YOU. FUCK YOU TRULY
WALTER C. ABBOTT JR.

Abbot v. State, supra. Based on this message, Abbott was charged with threatening to injure a state official in violation of Maryland Code of Criminal Law § 3-708(b). Abbot v. State, supra. Section 3-708(b) provides as follows: “A person may not knowingly and willfully make a threat to take the life of, kidnap, or cause physical injury to a State official or local official.” Maryland Code § 3-708(a)(3)(ii) says “state official” includes the Governor of Maryland.

At trial, Abbott moved for a judgment of acquittal, i.e., asked the trial judge to direct a verdict of not guilty. His attorney argued that Abbott’s message was “`nothing more than political hyperbole’” and cited officer Stachurski’s testimony that when he interviewed Abbott, Abbott said “he sent the e-mail because `sending this message would receive a response’"; Abbott `regretted sending the e-mail’; and . . .`he meant no harm.’" Abbott v. State, supra. The defense also pointed out that there was no evidence showing the Governor ever received and read the message, which the defense claimed “should be a condition of conviction.’” Abbott v. State, supra. The trial court denied the motion, the case went to the jury and it convicted Abbott. Abbott v. State, supra.

After being sentenced to 6 months’ incarceration and a $500 fine, he appealed, arguing, in part, that the trial court erred (i) by not letting him argue that the message he posted was not a “true threat” and was therefore protected by the 1st Amendment and/or (ii) by not instructing the jury on the requirements for a “true threat.” Abbot v. State, supra.

In ruling on Abbott’s arguments, the Court of Appeals noted, initially, that Maryland Code § 3-708(b) does not violate the 1st Amendment because a state “has a valid . . .interest in protecting the safety of its Chief Executive and allowing him to perform his duties without interference from threats of physical violence.” Abbot v. State, supra.

The issue, then, was whether the jury had validly applied the statute to what Abbott had done. In ruling on that issue, the Court of Appeals explained that a threat “`"is knowingly made if the maker comprehends the meaning of the words uttered; it is willfully made if the maker voluntarily and intelligently utters the words in an apparent determination to carry out the threat.’" Abbot v. State, supra (quoting U.S. v. Howell, 719 F.2d 1258 (U.S. Court of Appeals for the 5th Circuit 1983)). After reviewing a number of cases that had parsed the requirements for a “true threat,” the Court of Appeals held that these cases

lead us to conclude that the evidence presented below, when construed in the light most favorable to the prosecution, was more than sufficient to find that appellant willfully and knowingly made a true threat to injure the Governor, in violation of [Maryland Code of Criminal Law] § 3-708. We are satisfied that, in today's world, an e-mail constitutes a `threat in any written form,’ as required by § 3-708. Moreover, appellant also admitted he personally transmitted the e-mail to the Governor's office, `hoping’ the Governor would read it. Appellant's testimony established that he clearly intended to communicate to the Governor, allegedly for the purpose of getting the Governor's attention, because `you never get an answer any way from anybody.’

did not err or abuse its discretion in failing to propound appellant's proposed instructions nine through thirteen. They were either incomplete quotations of constitutional provisions that had no application to this case; deficient because they did not include any guidance to the jury as to how to apply the provisions in the context of the evidence; or they were legally incorrect.

Abbot v. State, supra. But that did not end its analysis of the instructions that were, and were, not given to the jury.

The prosecution “conceded early on that the `sole issue’ for the jury to decide was whether the communication constituted a threat.” Abbot v. State, supra. The Court of Appeals found that the instructions were inadequate with regard to this issue:

[T]he court informed the jury of the applicable statutory provision; the court read the text of § 3-708(b), regarding the making of a threat. But, the court's instruction was incomplete. The court never instructed the jury as to the meaning of `a threat.’ Nor did it provide any guidance to the jury as to how to determine whether the communication amounted to a threat, or instruct that only a `true threat’ violates the statute. Therefore, its instruction was erroneous.

Abbot v. State, supra. The Court of Appeals also noted that the trial court “should have instructed the jury as to the requirement of a true threat, which is distinguished from constitutionally protected speech.” Abbot v. State, supra. Because the court found this error prejudiced Abbott, it vacated his conviction and remanded the matter for a new trial. Abbott v. State, supra.

I found two aspects of this case interesting. One was the defense’s argument, in support of the motion for acquittal, that the factual context of this case mattered: The defense pointed out that unlike most threat cases – in which the perpetrator unilaterally initiates the communication with a victim who generally has not invited such contact – here the state had asked people to send comments to the Governor. The Court of Appeals didn’t address this argument, and I don’t have the briefs in the case, so I can’t tell you much more about it. Based on what I know of the facts, I don’t see how that matters. Isn’t it reasonable to assume that if a government agency (or some other person or private entity) creates a website and asks people to submit comments relevant to the agency’s performance, the site is only soliciting comments substantively related to that issue? In other words, I don’t see that creating such a site invites threats.

The other issue Abbott’s attorney raised was the fact that at trial absolutely no evidence was presented to show that the Governor ever read Abbott’s message. The argument here seems to be that the presumptive victim can’t actually have been “threatened” if he didn’t read or otherwise learn of the substance of the threat. I did a little research, and found a few cases that have held that something can constitute a “true threat” “even if the intended victim never received it.” U.S. v. Kistler, 558 F.Supp.2d 655 (U.S. District Court for the Western District of Virginia 2008).