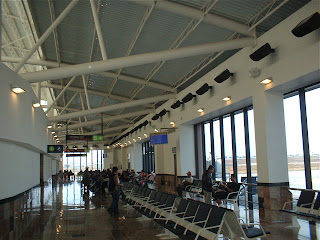 This post is about a recent case from a federal judge in Michigan that involved the border search exception. The case is U.S. v. Laich, 2010 WL 259041 (U.S. District Court for the Eastern District of Michigan 2010), and this is how it arose:

Ronald Mancos, of Melvindale, Michigan, complained to his local police department that he had received two images of child pornography while chatting online during the early morning hours of February 13, 2005. Mancos [said]. . . the person with whom he had been chatting utilized a Yahoo! profile name of `playthangnyc 18.’ Four days later, this information was conveyed to Immigration and Customs Enforcement (ICE) agents who determined that . . . playthangnyc 18 was registered to [James] Laich. . . . After Mancos consented to a forensic search of his computer, the ICE agents retrieved eight child pornographic images from `unallocated space’ on its hard drive. The images were not attached to any email and were not found to be connected to playthangnyc 18 or Laich. . . . [O]nly four of the images were the same as those Mancos reported to the ICE agents. [Agent] Buloushi, who had been authorized by Mancos to search his email account, found no evidence of child pornography after examining approximately 750 messages.


ICE agents placed Laich on a Treasury Enforcement Communications System (TECS) `lookout’ list which is maintained by the United States Customs and Border Protection . . . On April 1, 2005, CBP officers intercepted Laich and detained him upon his arrival on an international flight at the San Francisco International Airport. . . . [A]fter examining his laptop computer, released him when their search revealed no incriminating evidence.

Five days later, ICE agents . . . interviewed Cheri Wilson, manager of the condominium complex where Laich lived in Novi, Michigan. . . . [She said] Laich (1) [had] a desktop computer in his home and (2) spent time alone with a 12 year-old male relative. ICE agents confirmed Laich had internet access at his home. They also learned that in . . . February of 2005, Laich admitted to Novi police he had posed online as a woman who sought the attention of a male to have sex with `her’ fictitious five year old daughter. . . .


On April 10, CBP officers detained Laich and his baggage upon his arrival at the Dallas-Fort Worth International Airport on a flight from Mexico. . . . [When they] did not find any incriminating evidence after searching his luggage, they permitted him to proceed to his connecting flight. When the agents contacted Buloushi to [give him] an updated address for Laich, they . . . were asked to seize the laptop in Laich's possession. . . . Laich was escorted back to the customs inspection area where he was detained for approximately one and one half hours. Although Laich was allowed to leave the detention area after the ninety-minute span, his camera and laptop were permanently retained by the CBP officers. Rather than continue their search of Laich[‘s] computer or camera on-site, the officers [sent] the[m] to Buloushi in Detroit through Federal Express. . . . Buloushi gave the items to Special Agent MacBride. . . . Acting without . . . a search warrant, MacBride searched Laich's laptop, and found approximately five child pornography images in allocated space, one child pornography image in unallocated space, three child pornography images in the recycle bin and two child pornography movies which contained 150 images.

Buloushi prepared a [search warrant] affidavit . . . in which he . . .relied heavily on the evidence discovered during the forensic search of Laich's computer . . . . Relying on . . . the affidavit, the magistrate judge authorized [the warrant,] which was executed on June 15. . . . [A]gents seized . . . (1) a Toshiba laptop computer; (2) a Dell Dimension desktop computer with two hard drives; and (3) electronic storage media devices. A forensic examination of these devices revealed more than 1000 images of child pornography and 22 movies involving the same content.

In ruling on Laich’s motion, the federal judge noted that he seemed to concede that the “initial detention and search of his laptop at the Dallas-Fort Worth Airport falls within the border exception” but argued that when this search “bore no incriminating evidence, there was no legal exigency to support a second detention or the permanent seizure of his laptop.” U.S. v. Laich, supra. The prosecution responded with two arguments, neither of which the judge found persuasive:

First, it highlights Laich's placement on a TECS lookout . . .This factor is unpersuasive, in that the Government has not provided the Court with any insight into the overall nature of the TECS list, the standards, if any, that were used to determine an individual's placement on this list, or the significance, if any, of being designated as one for whom officials should `lookout.’

Second, the Government relies heavily upon the evidence that Buloushi told the Dallas CBP officers that Laich was the subject of a child pornography investigation in Michigan. Generally speaking, such information could arguably qualify as a “specific and articulable fact” that would ordinarily justify an officer in reasonably suspecting that a person had committed a criminal act. However, these facts alone do not support an inference that Laich's suspected criminal activity had any reasonable relationship to his recent border crossing. . . .

Laich's suspected crime was rooted in events that presumably had occurred several months prior to his arrival at the airport. . . . [T]he Government does not argue that his international travels were in furtherance of the alleged offense. . . . Because there is no showing that Laich was reasonably suspected of criminal activity related to his border crossing, the Government cannot justify its seizure of Laich's laptop as part of an extended border search.

U.S. v. Laich, supra. The “extended border search” is a doctrine some federal circuits have adopted; the U.S. Court of Appeals for the Sixth Circuit, which is the circuit whose law is binding on Michigan district courts, adopted the doctrine in U.S. v. McGinnis, 247 Fed. Appx. 589 (2007). The extended border search doctrine, then, could have applied here if the requisite elements existed. In adopting it, the Sixth Circuit noted that in deciding whether the doctrine applied in a given case, a court should pay “special attention to whether the suspected criminal activity relates to a recent border crossing”. U.S. v. McGinnis, supra. In the passage above, the Michigan district court judge applies that standard and finds that the doctrine did not apply on the facts at issue here.

That, though, was not the real issue the judge had to address. Remember, the CBP agents didn’t just take Laich’s laptop away from him and search it while they were detaining him at the DFW airport. They seized his laptop and Fed Ex’d it to Buloushi in Michigan, where another agent searched it for child pornography. U.S. v. Laich, supra. Taking the laptop from Laich and sending it to agents in Michigan was a “seizure” under the 4th Amendment; as I’ve noted, the 4th Amendment bars "unreasonable" searches and seizures, and a seizure interferes with someone’s possession and use of their property.

If you take my laptop and send it off to agents in another state, you’ve completely deprived me of its possession and use. If that seizure is “reasonable” under the 4th Amendment, the agents will be able to use what they find (as long as the search of the laptop was “reasonable,” too). If the seizure wasn’t “reasonable” – i.e, if it wasn’t authorized by a warrant or an exception to the warrant requirement – the agents won’t be able to use what they found because the seizure violated the 4th Amendment.

The judge found that this expanded seizure of Laich’s property wasn’t “reasonable:”

[T]here was no legal basis to support the permanent seizure of Laich's laptop computer. When the CBP officers directed Laich to return to the inspection area, they did not conduct an additional search of his laptop. Rather, they detained him and retained his computer for approximately ninety minutes and, thereafter, mailed the seized property to Buloushi in Detroit. Although the decision by the Supreme Court in United States v. Place, 462 U.S. 696,701-707 (1983) may have provided the officers with the legal authority to briefly seize Laich's laptop to investigate the circumstances which aroused their reasonable suspicion of a criminal wrongdoing, such an investigative detention was not properly limited in its scope here. In the absence of a demonstrated probable cause, the Government's decision to permanently seize Laich's property in Dallas and transport it hundreds of miles to another jurisdiction for further search was unreasonable by Fourth Amendment standards.

[T]here has been no evidence from the Government that would justify the subsequent warrantless forensic examination of Laich's computer. Inasmuch as the laptop was Laich's personal property, he had a reasonable expectation of privacy in the computer and its contents. . . . Although there may be situations in which law enforcement officers may seize the personal property of an individual and hold it until a search warrant is obtained, . . . no such effort was undertaken here. Furthermore, the Government has not pointed to any exigency or other circumstance that would justify the Court in making an exception to the general rule that searches must be conducted only with prior approval by a judge or magistrate.

U.S. v. Laich, supra. The judge therefore held that MacBride’s search of Laich’s laptop violated Laich’s rights under the 4th Amendment “and any evidence which was obtained as a result of this search must be stricken from the search warrant and suppressed from evidence.” U.S. v. Laich, supra. I suspect the two sides are arguing about exactly what this holding means, as to the child pornography seized from Laich’s home, but it seems clear that the child pornography MacBride found on the laptop has to be suppressed and therefore can’t be used to prove the charges against Laich.

It’s also clear that the child pornography found on his laptop couldn’t lawfully have been used to establish probable cause for a warrant to search his home, so I’m guessing that the child pornography they found there can’t be used either. That aspect of the case might implicate the Supreme Court’s decision in Franks v. Delaware, which I discussed in an earlier post.