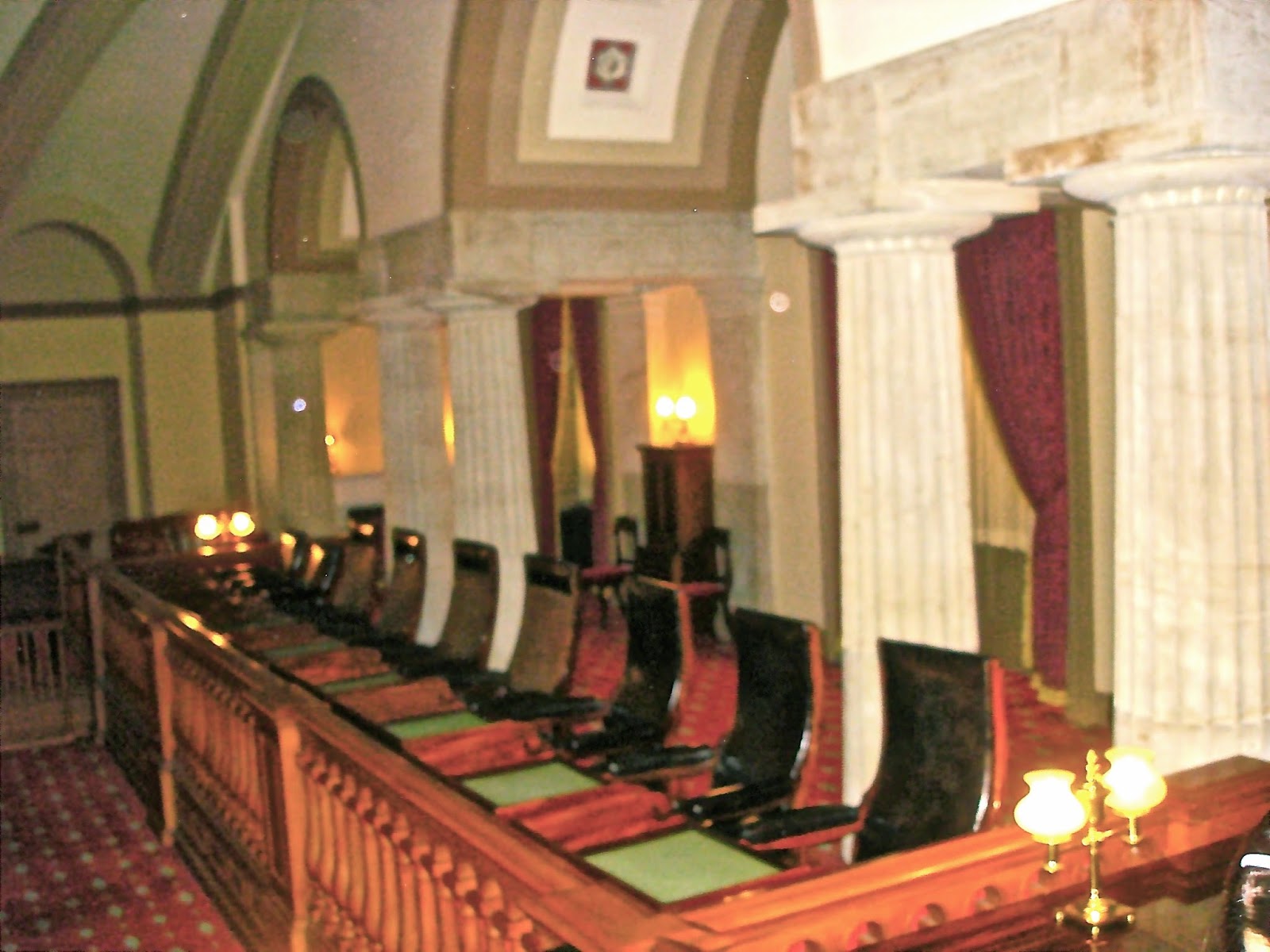 On April 25, 2013, the Toledo Bar Association "filed a five-count second amended complaint charging Beauregard Maximillion Harvey with violating various rules of professional conduct arising from his representation” several clients “in various legal matters.” Toledo Bar Association v. Harvey, 2014 WL 4358004 (Supreme Court of Ohio 2014).
The Supreme Court began its opinion by noting that this was Harvey’s
second disciplinary matter. Harvey was disciplined in 2012 for failing to act with reasonable diligence in representing clients, failing to keep his clients informed, and engaging in conduct prejudicial to the administration of justice.

We ordered a one-year suspension, all stayed on the conditions that he commit no further misconduct and submit to one year of monitored probation. Toledo Bar Assn. v. Harvey, 133 Ohio St.3d 228, 977 N.E.2d 628 (Ohio Supreme Court 2012).
The flowchart you can find here outlines the Ohio attorney disciplinary process.
On April 25, 2013, . . . the Toledo Bar Association, filed a five-count second amended complaint charging Harvey with violating various rules of professional conduct arising from his representation of four clients in various legal matters. Some of the conduct occurred during his stayed suspension and some occurred before his earlier disciplinary case.

After conducting a hearing, a three-member panel of the Board of Commissioners on Grievances and Discipline found that he had violated numerous rules of professional conduct. The panel recommended that he be suspended for two years, with six months stayed on conditions.
Toledo Bar Association v. Harvey, supra.   The Board of Commissioners on Grievances and Discipline
adopted the panel's findings of fact and conclusions of law but recommends that we suspend Harvey from the practice of law for two years with no portion of the suspension stayed.

Harvey filed objections to the board's recommended sanction, and relator filed a response to those objections.
Toledo Bar Association v. Harvey, supra.
This post examines the Supreme Court’s analysis of Harvey’s handling of the cases involving two of the four clients, the first being Andrea DeBagio who retained him on
October 8, 2010, to file a Chapter 7 bankruptcy petition and gave him a check for $999. The terms of the agreement for legal services between them provided that $299 was for filing fees and $700 was for Harvey's legal fees.

Harvey negotiated the check on October 8, 2010, and deposited $299 into his IOLTA account and the remaining $700 into another account.

DeBagio testified that she understood that the bankruptcy petition would be filed on November 2, 2010. She attempted to call Harvey after that date on multiple occasions because creditors were calling her.

She finally reached him on December 29, and Harvey told her he had not filed the petition and advised her that he thought that he should wait until after she received her tax refund check in February to file.

She agreed that he could wait to file. After she received her tax refund, she attempted to reach Harvey at least five times between February 17 and March 4, 2011.

She then retained new counsel to file the bankruptcy petition and requested that Harvey refund the money previously paid. Her new attorney also requested the refund for his client.

Harvey responded that he had `performed all but a de minimis amount of the work’ and that DeBagio would `only receive the filing fee back.’

DeBagio wrote to Harvey again on September 1, 2011, and noted that while she disputed the amount of work he had done, she was willing to accept only her filing fee back but indicated that she wanted it `as soon as possible.’

The panel found that despite DeBagio's and her new counsel's requests to return funds, Harvey did not return the $299 filing fee until October 2012, more than a year after the initial request.

The panel also found that Harvey's fee contract with DeBagio did not contain the required written clause that she may be entitled to a refund based on the value of the representation.

Harvey was charged with the following rule violations: Prof. Cond. R. 1.1, 1.3, 1.4(a)(4) (requiring a lawyer to comply as soon as practicable with reasonable requests for information from the client), 1.5(d)(3) (prohibiting a lawyer from charging a flat fee without simultaneously advising the client in writing that she may be entitled to a refund of all or part of the fee if the lawyer does not complete the representation), 1.15(c) (requiring a lawyer to deposit into a client trust account legal fees that are paid in advance), 1.16(d) (requiring a lawyer to promptly return property to the client upon termination of the representation), 1.16(e) (requiring a lawyer to promptly refund any unearned fee to the client upon termination of the representation), 8.4(c), and 8.4(d).
Based on the testimony and exhibits, the panel found by clear and convincing evidence that Harvey had violated all the rules charged in Count Three except Prof. Cond. R. 1.16(e), which it dismissed. The board adopted the findings of fact and conclusions of law of the panel.
Toledo Bar Association v. Harvey, supra.
That brings us to the other client:
Andre Zepeda, who sued his former employer, Cumulus Broadcasting, L.L.C. (`Cumulus’). Ashley Herd, corporate counsel for Cumulus, sent a letter to Harvey in February 2013 regarding Zepeda's contractual obligations with Cumulus. She requested that Harvey contact her before March 1, 2013, to discuss Zepeda's breach of the employment agreement.

Matt Spaulding, Cumulus's vice president and market manager, was copied on the letter. Harvey stipulated in this case that he was aware that Spaulding worked for Cumulus and was represented by counsel.

Harvey responded to Herd's letter by e-mail, refuting her claim and offering to `allow Cumulus to settle [its] potential liabilities by paying [his] client $25,000.’ On February 28, 2013, Harvey sent the following text messages to Matt Spaulding:

`[2:02 p.m.] And, your company is on the losing end on this one.’
Toledo Bar Association v. Harvey, supra.
Spaulding texted the following response to Harvey:
`[2:06 p.m.] As I have told you multiple times, this is not a discussion I will get into. Your threats would be better served elsewhere.’
Toledo Bar Association v. Harvey, supra.
Harvey then sent the following to Spaulding:
`[2:07 p.m.] Come on Matt, this surely isn't a threat. . . . don't be silly.’

`[2:09 p.m.] I don't think you understand. . . . this is fun stuff. Its intellectually challenging and it matters to someone. I only throw you shit on the side bc I like you.’

Beauregard Harvey is suspended from the practice of law for two years with six months stayed on the conditions that (1) he prove that he has made full restitution of $2,512, plus interest and costs, to Michael Degens, as ordered by the Toledo Municipal Court, and $1,050 to Andrea DeBagio for the additional attorney fees she incurred and (2) he commit no further misconduct.
Toledo Bar Association v. Harvey, supra.


Two of the Supreme Court Justices dissented, because they “would decline to stay any portion of the two-year suspension.”  Toledo Bar Association v. Harvey, supra.   If you are interested, you can find the full opinion here.
Posted by Susan Brenner at 9:06 AM