The Inventory Search, the Cell Phones and the Faraday Bag 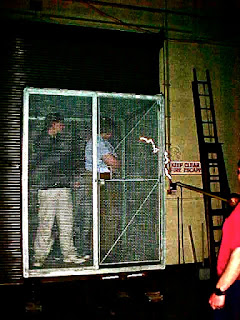 The plea was entered under Rule 11(a)(2) of the Federal Rules of Criminal Procedure, which lets a defendant “enter a conditional plea of guilty . . . , reserving in writing the right to have an appellate court review an adverse determination of a specified pretrial motion”, such as a motion to suppress.  The rule notes that if the defendant “prevails on appeal”, he/she “may then withdraw the plea.”

To understand Smith’s motion to suppress, it’s necessary to know a little about the investigation that led to the charges against him.  According to the opinion, it began in

The individual made all of his attempts either over the telephone or through e-mail, using fake e-mail accounts and Internet domain names in an attempt to impersonate an AmerenUE employee. AmerenUE and U.S. Bank employees learned of the scheme and notified the Federal Bureau of Investigation.

FBI Special Agent Brian Jackson was assigned to the case. He began his investigation by consulting with Special Agent Lyonel Myrthil, the bank crimes coordinator in the FBI's St. Louis office. Myrthil informed Jackson that he had heard of a similar scheme in Los Angeles that may have involved Mario Smith, who had relocated to St. Louis. Smith was on supervised release in St. Louis for being a felon in possession of a firearm and had previously been convicted of fraud.

U.S. Bank provided Jackson with the cash vault questionnaires the individual behind the scheme completed to obtain the cash vault delivery. By analyzing the documents' data, Jackson was able to learn that the username of the individual who completed the questionnaire was `bigdaddyallday.’ Jackson conducted an Internet search for `bigdaddyallday’ and discovered a YouTube account under that name.

Smith was in several videos and photographs belonging to this account. Also, the investigation revealed that one of the cash vault delivery requests was made for pick-up in the Chicago area. On June 15, 2011, Smith requested permission from his probation officer to travel to Illinois.

U.S. Bank also provided Jackson with a recording of a phone conversation between a bank employee and the individual posing as an AmerenUE employee. Myrthil identified the voice as Smith's. Myrthil had listened to a televised interview with Smith and also had spoken with Smith and listened to Smith's voice on multiple other occasions.

placed Smith under surveillance. That morning, an individual authorities suspected was Smith called U.S. Bank, and while impersonating an AmerenUE employee, requested a cash vault delivery of approximately $180,000. During surveillance, agents observed Smith drive, along with Sahib Lewis, to Smith's residence and pick up a messenger bag. Smith and Lewis then drove to a Quizno's restaurant in downtown St. Louis.

Agents entered Quizno's to arrest Smith, but he was in the restroom. Agents arrested Smith once he exited the restroom. Smith was uncooperative . . . refusing to place his hands in the view of the officers or sit down. The agents were aware Smith had a history of resisting arrest.

That brings us to the events that provided the basis for Smith’s motion to suppress:

Agents seized the messenger bag, which was roughly 15 to 20 feet away from Smith at a table with Lewis. While Smith was being handcuffed, he repeatedly told Lewis to take the bag. During Smith's arrest, Lewis was detained, but unrestrained, and could reach the bag. Myrthil later stated he believed seizure of the bag was necessary for officer safety.

Further, judging by the size and shape of the bag, agents believed the bag contained a laptop. The agents believed a laptop had been used in furtherance of the scheme because of the use of wireless access points to connect to the Internet. Myrthil seized the bag and immediately after touching [it] could feel a laptop inside. Agents did not know whether the bag contained any weapons. Agents also seized three cell phones that were on Smith at the time of arrest.

The agents then took the bag

to the FBI office in St. Louis, where Detective Brian Mize inventoried [it]. Mize discovered a laptop, a fourth cell phone, and bank records during the inventory. Agents interviewed Smith after a valid Miranda waiver. Smith admitted to his involvement in the scheme.

Jackson then placed the four cell phones and the laptop in a `Faraday’ bag to prevent remote access so the phone could not be remotely wiped. Jackson also placed the phones in `airplane mode’ to preserve battery life. He created an inventory list, but the list did not detail which cell phones were found on Smith's person and which were found in the bag. Jackson obtained a search warrant for the bag, laptop, and four cell phones.

After being charged, Smith filed a motion to suppress in which he argued that “the search and seizure of his bag” violated the 4th Amendment and required the suppression of all the evidence “obtained as a result of the arrest, search, and seizure.”  U.S. v. Smith, supra. As I noted above, the district court judge denied the motion, which led to this appeal.  U.S. v. Smith, supra.

Smith first argued that his arrest was not supported by probable cause, as is required by the 4th Amendment,

because agents learned of his identity based upon information obtained from an allegedly illegal search in Los Angeles. [He also argued] that the agents' voice identification, the connection to the `bigdaddyallday’ account, and the wireless access point near Smith's home are insufficient to establish probable cause.

`[W]e consider whether the facts and circumstances are sufficient to warrant a man of reasonable caution in the belief that [the person] was involved in the commission of a crime.’ U.S. v. Chauncey, supra. `A probability or substantial chance of criminal activity, rather than an actual showing of criminal activity is sufficient.’ U.S. v. Jones, 535 F.3d 886 (U.S. Court of Appeals for the 8th Circuit 2008).

knew Smith was a suspect in a similar scheme conducted in Los Angeles. Further, Jackson and Myrthil identified the voice of the individual calling U.S. Bank to set up the scheme as Smith's, and the district court's crediting of that identification was not clearly erroneous. . . . One of the documents sent to U.S. Bank to further the scheme was created by the user name `bigdaddyallday,’ which was also the name of a YouTube account featuring photographs and videos of Smith.

All of the e-mails sent in an attempt to obtain a cash vault delivery were sent from various wireless access points -- including an access point across the street from Smith's residence -- which indicated the scheme was completed using a laptop.

Finally, on the date of his arrest, an individual agents believed was Smith contacted U.S. Bank requesting a cash vault delivery, and Smith was seen traveling with a laptop bag. Considering all of the facts laid out above, a `substantial chance’ of criminal activity existed. U.S. v. Jones, supra.

Smith next argued that “even if the arrest was supported by probable cause, the bag was illegally seized and searched such that the bag and its contents should have been deemed inadmissible.”  U.S. v. Smith, supra. The Court of Appeals agreed that the bag was seized, which implicated the 4th Amendment, but found the seizure “was justified in order to preserve evidence.”  U.S. v. Smith, supra. It noted that the exigency exception to the 4th Amendment’s warrant requirement lets officers seize items if there is a risk that doing nothing risks the destruction of evidence.  U.S. v. Smith, supra.  And the court found that such a risk existed here:

The district court properly determined that the agents . . . had probable cause to believe the laptop bag contained evidence of a crime. Every agent, and the district court, agreed that the bag looked like one used to transport a laptop. As discussed, agents determined that because e-mails were sent from various access points, a laptop likely was used to further the scheme.

Also, the documents were made under username `bigdaddyallday,’ a name linked to Smith. Further, . . . immediate seizure was necessary to prevent destruction of evidence. Smith's statements to Lewis to take the bag illustrate that he was attempting to keep the bag from the agents.

Finally, Smith argued that Mize’s searching the bag at the station “before obtaining a warrant” violated the 4th Amendment. U.S. v. Smith, supra.  He claimed the search was “not a valid inventory search because the agent deviated from FBI inventory policy.”  U.S. v. Smith, supra.  In South Dakota v. Opperman, 428 U.S. 364(1976), the Supreme Court held that when officers seize someone’s property, it is “reasonable” under the 4th Amendment to let them conduct an inventory search to determine if the property contains any dangerous items, to made a record of its contents to protect police from claims of damaging or stealing items in the property and/or to ensure that the police take proper care of the property.  That, though, is not all that the 4th Amendment requires.

For an inventory search to be “reasonable”, and therefore not violate the 4th Amendment’s ban on “unreasonable” searches and seizures, the search must have been carried out according to established procedures.  U.S. v. Smith, supra. The reliance on such procedures helps ensure that police do not use inventory searches as a pretext to search for evidence without a warrant.  South Dakota v. Opperman, supra.

In this case, the Court of Appeals found that the district court judge

did not clearly err when determining that the inventory search was not merely a pretext to search for evidence. The district court credited Mize's testimony that he complied with FBI policy when conducting the inventory search. Mize stated he `ruffled’ through documents, only attempting to look for valuable or dangerous items.

We agree with the district court that it was reasonable for agents to place cell phones in `airplane mode’ and to store the electronics in the protective bag. Further, minor deviations from procedure, such as failing to indicate which cell phone was found in the bag and which cell phones were found on Smith's person, do not invalidate the inventory search.

For these and other reasons, the court affirmed Smith’s conviction and sentence.  U.S. v. Smith, supra.

If you would like to read a little more about the facts in the case, check out the news story you can find here.