Text Messages, Obstruction Of Justice and the BP Oil Spill 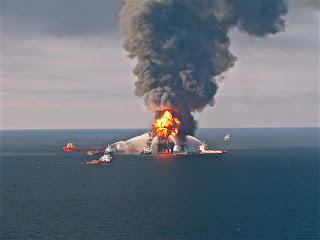 If you have forgotten, it was on April 20, 2010 that the Deepwater Horizon drilling rig, “leased by BP, was completing work on the Macondo well in the Gulf of Mexico” when it  “experienced an uncontrolled blowout of gas and oil, which quickly led to two massive explosions resulting in the deaths of eleven men and the largest oil spill in United States history.” U.S. v. Mix, Indictment, supra ¶ 2.  That brings us to what happened next:

3. Following the Macondo well explosions, Defendant KURT MIX worked on a number of efforts by BP to stop the flow of oil. As part of his work, MIX generated and had access to BP internal data regarding the amount of oil flowing from the Macondo well after the explosions. The amount of oil flowing was relevant to various efforts to stop the flow and . . . to assessing the damage caused by the flow, including potential . . . civil and criminal fines and restitution.

4. From at least in or about April 2010 through in or about July 2010, . . . MIX used a cellular telephone and/or an iPhone to exchange electronic text messages with other BP employees and contractors with whom he was working on flow-rate assessments and efforts to stop the flow of oil. . . . MIX exchanged text messages with, among others, BP's then-Drilling Engineering Manager for the Gulf of Mexico (`SUPERVISOR’) and an outside contractor with whom MIX was working on the spill response (`CONTRACTOR’).

5. On or about April 22, 2010, BP issued to . . . MIX a Legal Hold Notice directing him to retain all records relevant to the Macondo well incident, including text messaging. The . . . Legal Hold Notice also stated that `[w]ithholding, concealing, altering, falsifying or destroying anything subject to this Legal Hold Order may subject individuals or BP to prosecution or other severe consequences.’

6. In or about and between late April 2010 and June 2010,  . . . BP sent MIX approximately five additional Legal Hold Notices, including one dated on or about May 5, 2010, which stated on the cover, in bold and underlined type, that instant messages and text messages needed to be preserved.

7. On or about June 1, 2010, the United States Attorney General publicly announced in New Orleans, Louisiana, that the Department of Justice (`DOJ’) was conducting civil and criminal investigations of the oil spill.

9. On or about September 22, 2010, MIX received an email from an outside vendor retained by BP's lawyers (`VENDOR’). The email notified MIX that VENDOR would be collecting documents and also requested to schedule a time with MIX to collect “all active electronic data.”

10. On or about September 27, 2010, met with VENDOR, who retrieved some of MIX's relevant hardcopy documents.

11. On or about Monday, October 4, 2010, MIX deleted from his iPhone all texts with SUPERVISOR.

12. On or about Tuesday, October 5, 2010, VENDOR attempted to collect MIX's electronic documents remotely.

13. On or about August 8, 2011, DOJ contacted MIX's criminal defense attorney to schedule a time to question MIX.

14. On or about August 17, 2011, MIX was contacted by VENDOR to schedule another document collection meeting and was informed of `possible collections (Laptop & PDA) for you.’

The indictment charges Mix with two counts of obstruction of justice in violation of 18 U.S. Code § 1512(c), which makes it a federal crime to “corruptly” alter, destroy, mutilate or conceals a record, document, or other object “with the intent to impair [its] integrity or availability for use in an official proceeding”.  U.S. v. Mix, Indictment, supra ¶¶ 17-20.  The first alleges that “on or about October 4, 2010”, he “did corruptly alter, destroy, mutilate, and conceal . . . electronic data contained within an electronic device, to wit: an iPhone containing text messages with SUPERVISOR . . . with the intent to impair its integrity and availability for use in . . . a federal grand jury proceeding.” U.S. v. Mix, Indictment, supra ¶ 18.

The second count alleges that “on or about August 19, 2011,” Mix “did corruptly alter, destroy, mutilate, and conceal . . . electronic data contained within an electronic device, to wit: an iPhone containing text messages with CONTRACTOR . . . with the intent to impair its integrity and availability for use a federal grand jury proceeding.”  U.S. v. Mix, Indictment, supra ¶ 20.

In this opinion, the judge is ruling on the “Motion in Limine to Preclude the Government from Improperly Relying Upon the BP Litigation Hold Notices” Mix filed in this case.  U.S. v. Mix, supra.  He sought an order that would, at trial, bar the prosecution from `“arguing or suggesting that mere non-compliance with the Hold Notices constitutes a violation of the obstruction of justice statute’” and to “`exclude . . . those portion of the Hold Notices that purport to describe the legal scope of the employee's document preservation obligations and the potential consequences of failing to satisfy those obligations.’” U.S. v. Mix, supra.

Mix also asked that the judge, “if requested to do so, to `caution the jury that any evidence Mix may have failed to comply with his company's internal Hold Notices does not prove Mix deleted text messages with the “corrupt” intent to impair a grand jury investigation.’”  U.S. v. Mix, supra.

The prosecution claimed the Hold Orders “are admissible as are [Mix’s] violations of the orders to establish 1) [his] mental state, i.e., that he acted with corrupt intent in deleting the text messages and voice mails, 2) to provide the context and circumstances of Mix's deletions; 3) to establish the foreseeability of a grand jury proceeding, an element of 18 U.S.C. § 15212.”  U.S. v. Mix, supra.

As to the first issue, the judge explained that “relevant evidence” is evident which “`has a tendency to make a fact more or less probable than it would be without the evidence’” and which is a “`fact of consequence in determining the action.’” U.S. v. Mix, supra (quoting Rule 401 of the Federal Rules of Evidence). He also noted that the prosecution argued that the fact Mix violated the Hold Orders was relevant to the issue of

foreseeability of a grand jury investigation as well as to Mix's motive and state of mind. To establish obstruction of justice under 18 U.S. Code 1512(c)(1), the United States must prove [Mix] committed one of the prohibited acts `with the intent to impair the object's integrity or availability for use in an official proceeding’. Therefore, the foreseeability of an official proceeding, e.g, grand jury, is an element of the offense.

Although the Hold Orders make no specific reference to a grand jury inquiry, they do advise the recipient that there is `a pending or anticipated legal matter’ and taking certain actions, including destroying, materials covered by the Hold Order `may subject individuals or BP to prosecution or other severe consequences.’ . . . The possibility of a grand jury proceeding is certainly within the scope of `prosecution.’ Based on that quoted language, the Hold Orders have a tendency to make the foreseeability of an `official proceeding more probable. Therefore, the evidence is relevant.

The judge also found that the evidence is relevant to Mix’s “motive and state of mind”:

He then explained that “without conceding that he violated the Hold Orders,” Mix

urges that even if [they] are probative, there is a substantial danger [they] will mislead the jury concerning the government's burden of proof and therefore . . . should be excluded . . . under Rule 403 of the Federal Rules of Evidence, [which] permits a court to `exclude relevant evidence if its probative value is substantially outweighed by a danger’ of, among other things `unfair prejudice.’ `Unfair prejudice “speaks to the capacity of . . . concededly relevant evidence to lure the factfinder into declaring guilty on a ground different from proof of specific to the offense charged.”’ U.S. v. Perez–Solis, 709 F.3d 453 (U.S. Court of Appeals for the 5th Circuit 2013) (quoting Old Chief v. U.S., 519 U.S. 172 (1997)).

Mix argued that the prosecution “`the Government cannot be permitted to use Mix's alleged non-compliance with the Hold Notices as a shortcut to proving Mix acted with the “corrupt” intent to obstruct a grand jury investigation’” and that the United States must be precluded “`from placing undue focus or emphasis on the Hold Notices.’” U.S. v. Mix, supra.  After reiterating that the Hold Orders are relevant evidence, the judge explained that the judge’s giving a

limiting instruction [at trial] setting out the limited purpose for which the Hold Orders are being admitted into evidence, given contemporaneously with the admission of the Hold Notices into evidence, and at the close of trial, will effectively reduce the possibility of any confusion as to the purpose of the evidence and the United State's burden of proof and will reduce the focus on the Hold Orders beyond their limited purpose.

Finally, Mix alternatively argued that “even if the Hold Orders are admissible, they should be redacted to excise any language purporting to define the legal obligations of the recipient of the notice.” U.S. v. Mix, supra.  Specifically, he argued that these portions

of the Hold Notices should be removed: 1) `[w]ithholding, concealing, altering, falsifying or destroying anything subject to this Legal Hold Order may subject individuals or BP to prosecution or other severe consequences’; 2) `[a]pplicable law requires that all BP employees comply with its duty to preserve all information potentially relevant to this incident’; and 3) `[f]ailure to do so could result in extreme penalties against BP.’

The judge found that the

specific reference to prosecution is not overly broad given that this case involves a criminal prosecution. Additionally, . . . the challenged provisions are the very portions of the statements that are significant in establishing the relevance of the evidence.

He held, therefore, that the Hold Orders

are relevant to the foreseeability of grand jury proceedings and to defendant's motive and intent, and are therefore admissible and the probative value of the evidence is not [Mix’s] motion to the extent it seeks to `preclude the Government from arguing or suggesting that mere non-compliance with the Hold Notices constitutes a violation of the federal obstruction of justice’ statute and to the extent the Court will give a limiting instruction concerning the limited purpose for which the Hold Orders are being admitted into evidence.

If you would like to read a news story about the charges in this case and the context they arose from, check out the story you can find here.  And this story adds some details about precisely what Mix was alleged to have done, with regard to the text messages.
Posted by Susan Brenner at 6:58 AM