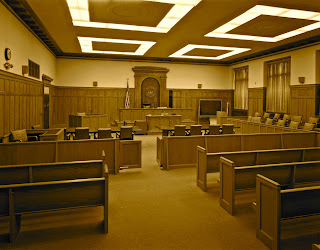 (After Cupples was convicted, the judge sentenced him to “71 months to 15 years' imprisonment.” People v. Cupples, supra.)

The news story you can find here outlines the facts in the case.  This is how the Court of Appeals’ opinion explains what led to his being charged, and convicted:

The victim in this case is [Cupples’] stepdaughter. The victim, her mother, and her brother, Michael, lived with [him] until August 2010, at which time the victim told [her mother] that [Cupples] had been sexually assaulting her. The victim, who turned 13 years old in April 2010, said that on `[m]ore than five, but . . . less than 20’ occasions beginning `[a]round the summer of fifth grade,’ [he] `would touch [her] when [she] was sleeping.’ The assaults would occur in her bedroom at night.

The victim would awake to [Cupples] `pulling [her] shorts aside,’ and [he] `would move [her] legs apart if they weren't apart’. . . . [Cupples] would expose the victim's `vaginal area,’ and he `touche[d her]’ with `his fingers’. . . . In the time leading up to when the victim revealed the abuse to [her mother], she noticed the touching had progressed and that [Cupples] `would start rubbing [her] butt.’ She pretended to be sleeping during the assaults because she was `afraid [he] might . . . attack [her,] . . . or tell [her] to not . . . [Cupples’ stopped touching her each time, he would stand in the doorway for several minutes before leaving. The following day, the victim would `try to act as normal [sic] as possible’ around [him].

asked Shinabarger if she was `clear that they have to be done tonight,’ and she said, `Yes, the first thing we're going to do is move the comput[—,]’ and [Cupples] interrupted, saying, `Don't, . . . this is all recorded.’ He then said, `I just need to know that you [two] understand what your homework is.’ She said, `We do, we do.’

Cupples made several arguments on appeal, two of which were that his defense lawyer “provided him with ineffective assistance” because he did not “object to [prosecution expert witness Jerry] DeRosia's testimony linking [Cupples’ to . . . deviant websites, and failed to protect his own computer forensics expert, Larry Dalman, from improper questioning.”  People v. Cupples, supra. As Wikipedia notes, ineffective assistance is

a claim raised by a convicted criminal defendant that their attorney’s performance was so ineffective that it deprived them of the constitutional right guaranteed by the Assistance of Counsel Clause of the Sixth Amendment to the United States Constitution. Having the benefit of counsel . . . means that the criminal defendant has had a competent attorney representing them. Competence is defined as reasonable professional assistance. . . . [T]o prevail on a claim that he received ineffective assistance, a criminal defendant must show two things:

That brings us to DeRosia’s testimony.  The opinion explains that DeRosia, a forensic

computer investigator with the Oakland County Sheriff's Office, testified that he received the computer that was taken from the den in the marital home. He noticed the hard drive was `very clean,’ meaning that `most of the unallocated space [on the hard drive] seemed to be zeroed out.’

DeRosia expected to find more data in `temporary internet files’ than he actually did, considering the computer had been used regularly by four people, each of whom used the internet. DeRosia uncovered `a lot of pornography,’ including duplicates, comprising `close to half’ of all of the images on the computer.

DeRosia noticed several `Flash cookies’ on the computer, which are small files associated with Adobe Flash Player that are routinely placed on a computer without the user's knowledge when the user visits webpages that feature Flash software.

DeRosia found Flash cookies for sleepassault.com, depicting `teens being . . . sexually assaulted while they sleep and don't wake up,’ as well as mystepdadmademe.com, depicting `girls having sex with their stepdads,’ featuring images of a `[y]oung adult’ female and an `older’ male.

The Court of Appeals began its analysis of Cupples’ ineffective assistance of counsel argument by noting that to prevail, he had to establish both prongs of the test quoted above.  People v. Cupples, supra.  It noted that Cupples raised this issue by filing a motion for a new trial with the trial court, a motion the judge denied because he found that “even if counsel's performance fell below an objective standard of reasonableness, [Cupples] could not show that he was prejudiced by any of the errors.”  People v. Cupples, supra.  In other words, the trial judge found that even if Cupples had shown that the lawyer’s performance was substantively deficient, he did not show that he was prejudiced, i.e., damages, by the deficiency.

The Court of Appeals then took up Cupples’ argument that DeRosia was “not qualified” to offer an opinion about the Flash cookies.  People v. Cupples, supra.  He testified as an expert witness, and the court noted that under Michigan Rule of Evidence 702, a trial judge can allow “a witness qualified as an expert by knowledge, skill, experience, training, or education” to testify “in the form of an opinion” if “the testimony is based on sufficient facts or data,” it is “the product of reliable principles and methods” and the witness “has applied the principles and methods reliably to the facts of the case.”  People v. Cupples, supra.

The court found DeRosia “was undoubtedly an experienced computer forensic investigator”, with perhaps one exception. People v. Cupples, supra.  At Cupples' trial, he testified that he is

certified by the International Association of Computer Investigator Specialists, which requires about one year of training and examinations for recertification every three years, and was mentored by another forensic computer examiner as part of that training. He is certified, by the International Association of Computer Investigative Specialists, as a specialist in electronic evidence collection, cellular phone forensics, and intrusion detection, and teaches computer forensics at Oakland Community College.

He had, on `10 or 11’ occasions, been qualified as an expert in computer forensics in Oakland Circuit Court, district courts, and federal district court. Significantly, he was experienced with EnCase, the forensic software that revealed the Flash cookies. However, he admitted to having no specific knowledge of Flash cookies before this case.

The Court of Appeals then explained that, in denying Cupples’ motion for a new trial, the trial nudge noted that he “took issue” with DeRosia’s testimony that the

`presence of the flash cookies necessarily `means’ that `somebody went to that site and viewed something that required a flash player to make.’ This testimony, [Cupples] argues, was incorrect, as [his] computer could have acquired the flash cookies by visiting another site that included content, such as banner advertisements using the flash system, from the `mystepdadandme.com’ and `sleepassault.com.’ Thus, the testimony could have been excluded if a proper objection had been made.

The trial judge, though, also found that evidence regarding the Flash cookies was

`only a small part of the prosecution's case. In addition, the prosecution provided testimony from the victim describing the assaults, as well as credible objective evidence (such as the semen recovered from the victim's bedroom) corroborating [her] version of events and evidence of highly incriminating statements made by [Cupples] during his telephone calls from jail.’

`Moreover, there is no claim that DeRosia was not qualified to testify regarding other aspects of [Cupples’] computer, including indication that it had been `cleaned’ to remove indications of how it had been used before it was turned over to authorities. Finally, the absence of evidence regarding flash cookies would not have undermined the credibility of any of the prosecution's other evidence.’

The trial judge therefore found that, given all this, there was not

`even a remote possibility that the jury would have acquitted [Cupples] if his trial counsel had successfully objected to DeRosia's testimony regarding the flash cookies, much less the `reasonable probability’ of such a result required to obtain relief. . . .

[E]ven if defense counsel was negligent in failing to object in this regard, such negligence cannot be said to call into question the reliability of the jury's verdict in this case. Thus, [Cupples] is not entitled to relief on this basis.’

The court agreed with the trial judge’s analysis, as the inclusion of these lengthy quotes from that judge probably indicate.  People v. Cupples, supra.  It also noted that Cupples’ conviction was supported by other evidence, including the victim’s testimony and the “evidence of [his] semen found on the carpet next to her bed, an indication that he masturbated either while or after he molested her.” People v. Cupples, supra.  Finally, it cited testimony from Michael and the victim that Cupples,

The Court of Appeals therefore held that

[g]iven the overwhelming volume of evidence against [Cupples], it is not likely that the jury's verdicts would have been different but for trial counsel's alleged errors. Accordingly, [he] cannot show he received ineffective assistance of counsel.

(Cupples also claimed the trial judge erred in admitting evidence that he “possessed over one million pornographic images on a shared computer”.  People v. Cupples, supra.  He claimed the evidence was

was irrelevant and `led the jury to conclude [he] was a pervert who acted in conformity with his deviant propensities.’ He maintains the evidence did not reveal a specific sexual interest in, or intention toward, the victim in particular.

The Court of Appeals did not agree, because it found the evidence

tended to show [Cupples] had visited websites depicting young women being assaulted in their sleep, and young women engaging in intercourse with older men meant to be their stepfathers, was relevant to prove [his] intent to touch the victim, his teenaged stepdaughter, while he thought she was asleep, for sexual gratification.

People v. Cupples, supra.
Posted by Susan Brenner at 7:44 AM