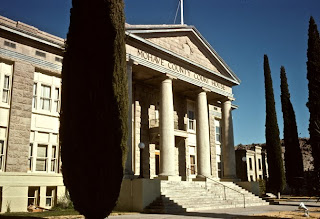 As I explained in a post I did a couple of years ago, in 2006 Congress adopted the Adam Walsh Act, which added § 3509(m) to Title 18 of the U.S. Code. As I explained, § 3509(m) basically creates an exception to the rules of “discovery,” i.e., the rules that let each side have an opportunity to examine the evidence the other side will use at trial.

This post is about a state case in which § 3509(m) became an issue. A joint investigation by the FBI and the Kingman (Arizona) Police Department resulted in a search of Mark Johnson’s computer “which allegedly contained several images of child pornography.” State v. Johnson, 2010 WL 1424369 (Arizona Court of Appeals 2010). After being indicted on 10 counts of possessing child pornography, Johnson asked that “an identical copy of the hard drive be provided to the computer forensics expert under a protective order.” State v. Johnson, supra.

The prosecution asked the court to deny the motion, citing an Arizona Rule of Criminal Procedure which says evidence should only be released to a defendant “when it is necessary to protect a defendant’s right to a fair trial.” State v. Johnson, supra. At the oral arguments on Johnson’s motion to compel release of a copy of the hard drive, his lawyer explained why forcing his expert to review the hard drive at the FBI office would violate Johnson’s right to a fair trial:

Defense counsel said . . . he did not have [the expert] at argument because it would be too costly to have her come to Kingman from Tucson when he could speak on her behalf. He said the expert told him it could take her up to a few days to complete the examination. He stated:

`If it's going to take longer than a day, she'd have to leave the evidence there, rely upon the government not to interfere or tamper with her process while she goes back to her office, goes home to sleep, eat, live her life, and then eventually when the tests are done, to come back and retrieve it and assume that everything is okay . . . [T] here's no safeguard we are comfortable with that's going to assure this stuff is not tampered with. . . . And the fact it's not in our secured environment, we believe any test that is done while in the government's hands would simply be insufficient.’


Defense counsel expressed concern that the expert's access to the evidence would be limited during trial because the hard drive would be at the Tucson or Phoenix FBI Office while the trial is in Kingman. He urged the trial court to find that the proffered accessibility, security and access to resources concerns associated with investigating the evidence at the FBI facility would deprive Johnson of his right to a fair trial.

The State responded that the hard drive evidence is of the type typically viewed in a state facility and that the FBI has `terminals and areas available for forensic experts to come and examine evidence, because this is part of [the FBI agent's] routine evidence provision.’ The prosecutor stated that `[t]here is no sign at this time that there will be any denial of time with the materials as needed.’

Every time I get one of these cases, I think this is a unique issue. But when I step back from it, I look and there's thousands of cases where evidence is taken into state custody that could never be released again to the defendant or anybody else. Including drugs, including other items that are not allowed back onto the streets once they're taken into custody. . . . And I believe, just like there could be an independent test of any drugs that are found, or any urinalysis that is taken, or blood tests that are taken, there can be an independent review of this particular evidence.

The prosecution appealed the judge’s order dismissing the charges, arguing that Johnson hadn’t shown that giving his defense expert access to the material under the prosecution’s original conditions would deny him his constitutional right to a fair trial. State v. Johnson, supra. The Court of Appeals found that Johnson raised “valid concerns” regarding “accessibility, security, and access to resources in the State’s requiring his expert to review the hard drive at the FBI office. State v. Johnson, supra.

As to accessibility, Johnson repeated his arguments that his expert would not have the access she needed, either before or during trial. State v. Johnson, supra. He lost:

The State responded to these accessibility concerns by claiming access would be made nearest the expert prior to trial and the exam could be conducted at the expert's discretion anytime she needed it. Under these circumstances, we conclude that the State adequately rebutted Johnson's accessibility of evidence arguments.

State v. Johnson, supra. As to security, Johnson argued that government agents could

In this case, however, the State did not adequately rebut Johnson's security concerns despite the FBI's willingness to provide a secure facility in previous federal cases. Therefore, the trial court did not abuse its discretion in concluding that Johnson made a substantial showing that inspection of the items under the State's conditions would undermine his right to effectively investigate the evidence against him.

State v. Johnson, supra. In reaching this conclusion, the Court of Appeals noted that in two federal prosecutions, the federal authorities had taken steps (i.e., the area the defense expert used was “in a security office complex” of the government offices and “the expert’s materials could be secured in a locked case when not in use”) to secure the defense expert's materials. The Court found that these cases indicated that “the FBI could ensure a secured facility” in which Johnson’s expert could review the hard drive. State v. Johnson, supra. The Court of Appeals found that the FBI had not adequately rebutted Johnson’s security concerns, since it had been willing to do so in other cases. State v. Johnson, supra.

As to resources, Johnson argued that his expert

could not access her reference materials if required to conduct the exam at the FBI office. Moreover, Johnson argues, the expert could not do other work while waiting for exam results, which could increase the costs of the examination to $20,000. While the latter argument is akin to a convenience argument, the former argument is persuasive. The State did not proffer a remedy to the expert's inability to access her reference materials at the FBI facility. . . .

[T]he State did not rebut Johnson's argument that his expert would not be able to access the resources she typically uses in these types of investigations despite the FBI offering similar resources to experts in the aforementioned federal cases. Therefore, we conclude that Johnson's access to resources concern amounts to a substantial showing that a copy of the hard drive was required to ensure his right to a fair trial.

As far as I can tell, this outcome is unusual . . . maybe even exceptional. Last year I did a post on a case in which a Tennessee trial court judge dismissed child pornography charges based on circumstances that were very similar to those at issue in this case. In the Tennessee case, though, the prosecution appealed the dismissal order to the Tennessee Court of Appeals, which reversed it. I also found a 2008 case in which the same thing happened in Ohio, except that in this case the trial court dismissed the charges, the Court of Appeals affirmed the dismissal and the Ohio Supreme Court reversed both of them. State v. Brady, 119 Ohio St.3d 375, 894 N.E.2d 671 (Ohio Supreme Court 2008). So this doesn't seem to happen often. It’ll be interesting to see if the Arizona prosecutor appeals this decision to the Arizona Supreme Court.