“Pimping,” the iPad and the Motion to Suppress 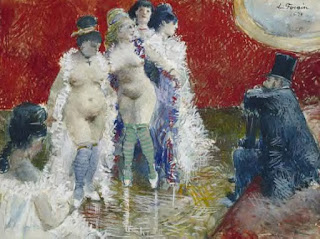 This post examines a recent decision from the CaliforniaCourt of Appeals – First District:  People v. Zhuang Miao, 2015 WL 8340989 (2015).  The court begins by outlining the “essentially undisputed facts established as the hearing” on Zhuang Miao’s motion to suppress certain evidence:
At approximately 1:07 a.m. on September 30, 2013, Officer Wilfredo Herrera was dispatched to the Quality Inn & Suites Hotel in South San Francisco. He was the first officer on the scene at approximately 1:11 a.m. Herrera was dispatched to the hotel based on a call from a reporting party believed to be the night agent at the hotel. The reporting party stated he believed there was possible prostitution activity at the hotel because a gray Hyundai arrived at the hotel at approximately 12:30 a.m., and dropped off two females.

When Herrera arrived at the hotel, he saw a gray Hyundai in the parking lot with a male in the driver's seat and a female, identified as [Zhuang Miao], sitting in the back seat behind the driver. Herrera parked his police vehicle in a manner as to not block the gray Hyundai. He exited his vehicle and approached the Hyundai. He did not activate his vehicle's emergency lights or spotlights.

Herrera approached the driver's side window and looked in the vehicle using his flashlight. He attempted to speak with the driver, but he spoke only Chinese. Herrera then spoke with defendant, who spoke English. He asked defendant whether she was staying at the hotel and she said she was not. Herrera then asked defendant and the driver for their identification and both promptly gave them to the officer.

Immediately after Herrera had obtained the identifications, he noticed an Asian female, dressed in a manner consistent with that of a prostitute, exiting the hotel. When she saw Herrera, she immediately went back into the hotel.

Herrera did a positive records check of [Zhuang Miao] and the driver over his patrol radio at approximately 1:15 a.m. Immediately after running the names, he saw another female, also dressed in provocative clothing, exit the hotel. When she saw Herrera speaking to defendant and the driver, she walked in the opposite direction. Herrera walked toward her and asked her to `hold on a second.’ At the same time, a second officer arrived on the scene and Herrera asked him to speak to the female suspect.

Herrera went inside the hotel to look for the female he had seen return there. He found her in the lobby. She did not speak English, so he gestured for her to follow him outside. A third officer had arrived on the scene, who he asked to stay with that female.

Herrera then returned to the car. He asked the driver to come out of the car, obtained his consent to search his person, which he did and found nothing suspicious. Herrera then asked [Zhuang Miao] whether she was related to the driver and she told him he was just a friend. The officer asked whose car it was and defendant answered that it belonged to her. Herrera then asked her, `Is it okay if I take a look in your car? I'm looking for guns, knives, anything dangerous,’ to which defendant responded, `Go ahead.’

Herrera then proceeded to search the car. He found eight cell phones and a green zipper pouch with a lot of money on the rear passenger seat. There was also an iPad on that seat, labeled `Zhuang Miao's iPad.’ Herrera testified that he `pressed the button, slid the screen, and it was immediately opened up to a Gmail account.’ No images appeared but he then found applications on the iPad that he recognized as adult websites which he believed to be tools to solicit prostitution. One of the sites had an advertisement with a phone number that matched one of the cell phones found in the car. That site advertised, `Two Asian Beauties will rock your world.’ Other officers Google searched that phone number on their own cell phones and found that the number appeared on advertisements for myRedbook, one of the claimed prostitution services. Defendant told Herrera that the number was her business phone number. Herrera then searched the trunk of the vehicle, where he found a black plastic garbage bag that contained over 100 new condoms.

[Zhuang Miao] told Herrera she was waiting for the two provocatively dressed female suspects from the hotel, but denied that they were prostitutes. Defendant told him she worked with approximately six clients, who did not speak English. She helped them post advertisements on the websites Herrera had seen on her iPad. [Zhuang Miao] explained that the number of phones was due to the number of clients she worked with. She received $40 per client.

Herrera arrested [her] at approximately 2:19 a.m.
People v. Zhuang Miao, supra.
The opinion goes on to explain that Zhuang Miao was
initially charged with two counts of deriving earnings from another person's act of prostitution (California Penal Code § 266h, subd. (a) (`any person who, knowing another person is a prostitute . . . derives support or maintenance . . . from the . . . proceeds of the person's prostitution. . . is guilty of pimping, a felony’). She filed a motion pursuant to section 1538.5 seeking to suppress all objects found in the vehicle and, in addition, `[a]ny and all writings printed or copied or memorialized in any way from defendant Miao's Cell Phone, Computer, iPad or any other electronic device seized by the police from the defendant Zhuang Miao.’

After receiving testimony and argument, the court denied the motion with the following explanation: `The term “consent” is a term of art. The officer testified that he asked whether he could search the car. He didn't say whether I can have your consent to search the car. He asked the question, she said yes, and then the last consent, but the term “consent” isn't anything that was hoisted on your client. So the fact that she doesn't know what “consent” means is really not relevant. And I find that there was sufficient cause to proceed based on the evidence that I've heard and the motion is denied.’
People v. Zhuang Miao, supra.
The opinion explains that after the judge denied her motion to suppress, Zhuang Miao
pled no contest to an amended charge of procuring a person for the purpose of prostitution by force or false inducement (§ 266a). Pursuant to the plea agreement, she was placed on probation for three years, with a 90–day term in county jail or the Sheriff's Work Program. She timely filed a notice of appeal, challenging the denial of her motion to suppress.
People v. Zhuang Miao, supra.
Zhuang Miao made two arguments on appeal: (i) she was illegally detained by Officer Herrera and the other officers in violation of the 4th Amendment; and/or (ii) the police search of her iPad was conducted without her consent and in violation of the 4th Amendment. People v. Zhuang Miao, supra.
The Court of Appeals rather quickly disposed of the first argument, explaining that
[Zhuang Miao] contends that she was detained `at the time that Officer Herrera approached her car’ or at least when the officer obtained and temporarily retained her identification. We do not necessarily agree that either of those circumstances, or any of the surrounding circumstances up to that point in time, gave rise to a detention. (See, e.g., People v. Cartwright (California Court of Appeals 1999) 72 Cal.App.4th 1362, 1370–1372).

However, even assuming there was a detention, the officer unquestionably was aware of sufficient facts suggesting that defendant was engaged in unlawful activity to justify the detention. The officer was aware of the recent report, apparently from the desk clerk, that persons in a gray Hyundai had dropped off two women at the hotel that the caller believed were engaged in prostitution. [Zhuang Miao] was found in a car matching the caller's description and acknowledged that she was not a guest of the hotel.

Her consent given in response to that request cannot reasonably by construed as permission to open her iPad and view the data that she maintained on the electronic device. `”A consensual search may not legally exceed the scope of the consent supporting it.”’ (People v. Cantor (California Court of Appeals 2007) 149 Cal.App.4th 961, 965.) The prosecution bears the burden of proving that the officer's warrantless search was within the scope of defendant's consent—that `”the typical reasonable person [would] have understood by the exchange between the officer and the suspect”’ that the consent extended to the object searched. People v. Cantor, supra.

Although an appellate court will uphold the trial court's determination unless clearly erroneous, as in Cantor, `[t]he trial court [here] erred as a matter of law by failing to recognize the limited scope of defendant's consent.’ (People v. Cantor, supra; see also, e.g., U.S. v. Dichiarinte (U.S. Court ofAppeals for the 7th Circuit 1971) 445 F.2d 126.) Insofar as defendant's motion sought to suppress all information obtained from opening and viewing the digital data stored on defendant's iPad, and the evidence obtained as the result of that search (Wong Sun v. U.S., (1963) 371 U.S. 471), the motion should have been granted.
People v. Zhuang Miao, supra.
The Court of Appeals went on to explain that the U.S. Supreme Court
has now held that a warrantless search incident to an arrest does not permit a search of the digital contents of a cell phone seized incident to the arrest, and the decision undoubtedly extends to the contents of other electronic devices such as an iPad. (Rileyv. California (2014) – U.S. – [134 S.Ct. 2473].) At the time of the events in question in the present case, Riley had not yet been decided, and the California Supreme Court had reached a contrary conclusion in People v. Diaz (2011) 51 Cal.4th 84. The Attorney General recognizes that Riley applies retroactively (People v. Cage (2007) 40 Cal.4th 965, 974, fn. 4) but argues that the decision is inapplicable here because the search of the iPad was a valid consensual search, a contention that we have just rejected.

Thus, we conclude that the trial court erred in denying the suppression motion insofar as the motion sought to suppress evidence of the information Herrera observed when he activated defendant's iPad, testimony concerning the correlation of that information with the phone numbers of the cell phones found in defendant's car, and testimony of statements made by defendant when confronted with that information. Since defendant entered her no contest plea following the denial of the motion to suppress, her conviction must be reversed and the matter remanded to give defendant the opportunity to withdraw her plea if she so elects. (People v. Hill (California Supreme Court 1974) 12 Cal.3d 731, 767–770).
People v. Zhuang Miao, supra.


For these and other reasons, the Court of Appeals therefore held that “[t]he judgment is reversed and the matter remanded for further proceedings consistent with this opinion.” People v. Zhuang Miao, supra.
Posted by Susan Brenner at 9:50 AM