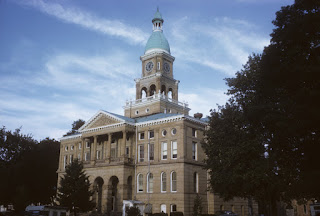 This post examines a recent opinion from the Court of Appeals of Michigan:  People v. Gatzke, 2015 WL 7750157 (2015) (per curiam).  The opinion begins by explaining that Shawn Lee Gatzke
pleaded guilty to one count of using a computer to commit a crime. [Michigan Compiled Laws] 752.796.  The trial court departed downward from the sentencing guidelines and sentenced defendant to 5 years of probation, with the first year to be served in the county jail. The prosecution sought leave to appeal, which we granted. We remand for further proceedings consistent with this opinion.
People v. Gatzke, supra.
Michigan Compiled Laws § 752.796 is an unusual criminal statute.  As I explained in detail in a post I did four years ago, only two U.S. states have statutes that create this offense.  The Michigan statute is entitled “[u]se of computers to commit, solicit, attempt, etc., a crime; prosecutions for other violations of law” and, as I explained in the earlier post, it makes using a computer to commit (or solicit or attempt to commit) a separate crime.
As I explained in that post, my theory (at least) is that Michigan and Hawaii (the only other state to have this crime) adopted these statutes to treat the use of computers to commit crimes in a fashion analogous to statutes that make it a separate crime, or a factor that aggravates the sentence imposed for a traditional crime, to use a firearm in the commission of the offense.
Getting back to the Gatzke case, the opinion goes on to explain that
[a]t the plea hearing, defendant admitted that he used a computer to view pictures of children performing sexual acts and paid someone in another country to take pictures of children performing particular sexual acts. It is undisputed that defendant was on probation for possessing and distributing child sexually abusive material when he was caught with the materials giving rise to the conviction in this case.

Before sentencing, the trial court received a report from a psychological evaluation of defendant that occurred after he entered his guilty plea, as well as reports from two previous psychological evaluations. The most recent evaluation confirmed, among other things, that defendant suffers from severe post-traumatic stress disorder (`PTSD’), alcohol dependence, and sexual addiction. The report also noted that defendant's sexual addiction appears to be related to the poor coping strategies utilized by defendant to manage his PTSD.
People v. Gatzke, supra.
In a footnote the court appended at the end of the first sentence of the first paragraph quoted immediately above, the Court of Appeals explained that
Defendant initially stated that he was not certain whether the photographs that he purchased were reproduced, or whether the individual receiving payment actually took the photographs. However, he later clarified that he asked the individual to take pictures of young children performing sexual acts with his or her cell phone and send the photographs to defendant.
People v. Gatzke, supra.
The court went on to explain that at Gatzke’s sentencing,
the trial court acknowledged that this was defendant's second offense involving child sexually abusive material, and that defendant had an opportunity for rehabilitation during his probation sentence for the previous offense. Likewise, the trial court recognized that this circumstance would normally preclude a more lenient sentence.

Nevertheless, the trial court significantly departed from the minimum range calculated under the sentencing guidelines, which was 84 to 140 months' imprisonment, and sentenced defendant to five years' probation, with the first year in the county jail. The conditions of defendant's probation include: (1) taking advantage of services offered by the United States Department of Veterans Affairs (`VA’) (2) successfully completing the VA program prescribed following a VA assessment, and (3) participating in a substance abuse evaluation.

The trial court judge provided the following reasons for the downward departure: (1) the judge's belief that PTSD is not well understood; (2) his belief that defendant's PTSD prevented him from recognizing his problems and seeking out treatment, such that defendant is `numb’ due to his PTSD and engaged in this criminal activity as a result; (3) the judge's experiences with his own great uncle, who suffered from PTSD following World War I; (4) the judge's belief that `defendant engaged in these kind of viewing activities essentially to anesthetize himself from facing his ongoing problems’; (5) the fact that `it wouldn't surprise [the judge] if [d]efendant's viewing activities started when he was in the army’ and `if this is what soldiers did in Afghanistan with their time off if they had computer access’; (6) his belief that defendant would not have viewed this material if he had not served in Afghanistan, although `[he] suppose[d] there's no way of proving it’; and (7) the judge's knowledge of the types of things that military personnel saw and experienced in Afghanistan based on materials he has read.
People v. Gatzke, supra.
The Court of Appeals then took up the legal issue raised by the appeal, noting that
On appeal, the prosecution argues that the trial court abused its discretion when it departed from the sentencing guidelines because it failed to justify its departure with a sufficiently substantial and compelling reason that was based on objective and verifiable facts.

The People v. Lockridge, 498 Mich. 358 (Michigan Supreme Court 2015)] court held that our sentencing scheme `violates the Sixth Amendment right to a jury trial because it requires “judicial fact-finding beyond facts admitted by the defendant or found by the jury to score offense variables (OVs) that mandatorily increase the floor of the guidelines minimum sentence range, i.e., the `mandatory minimum’” sentence under Alleyne.’ Our Supreme Court `concluded that the appropriate remedy was to render Michigan's sentencing guidelines merely advisory.’

Accordingly, our Supreme Court `sever[ed] MCL 769.34(2) to the extent that it is mandatory and [struck] down the requirement of a ‘substantial and compelling reason’ to depart from the guidelines range in MCL 769.34(3).’ `A sentence that departs from the applicable guidelines range will be reviewed by an appellate court for reasonableness.’ However, sentencing courts must `continue to consult the applicable guidelines range and take it into account when imposing a sentence.’ [People v. Terrell, ––– Mich.App –––– (2015) (Docket No. 321573). . . .

Accordingly, a claim of error based on a trial court's failure to provide substantial and compelling reasons for a departure sentence is no longer viable under Michigan law. Instead, after People v. Lockridge, supra, the proper inquiry is whether a defendant's departure sentence is reasonable. People v. Lockridge, supra.
People v. Gatzke, supra (emphasis in the original).
The Court of Appeals then noted that,
[a]s this Court recently recognized, the Lockridge Court did not set forth the appropriate procedure for reviewing a sentence for reasonableness. People v. Steanhouse, __ Mich. App __ (2015). . . . Thus, the Steanhouse Court adopted the `principle of proportionality’ that was previously in place under People v. Milbourn, 435 Mich. 630; 461 NW2d 1 (Michigan Supreme Court 1990), `hold[ing] that a sentence that fulfills the principle of proportionality under Milbourn and its progeny constitutes a reasonable sentence under Lockridge.’ People v. Steanhouse, supra. . . .

In addition, the panel provided the following procedure for reviewing a defendant's departure sentence:

`Given that Lockridge overturned the substantial and compelling reason standard, Lockridge, supra, which was in place at the time of defendant's sentencing, and given our conclusion that the principle of proportionality established under Milbourn and its progeny is now the appropriate standard by which a defendant's sentence should be reviewed, we also find that the procedure articulated in Lockridge, and modeled on that adopted in U.S. v. Crosby, 397 F3d 103 (U.S. Court of Appeals for the 2d Circuit 2005), should apply here. Lockridge, __ Mich. at __. . . .

As recently stated by this Court in People v. Stokes, __ Mich.App __, . . . (2015), `the purpose of a Crosby remand is to determine what effect Lockridge would have on the defendant's sentence, so that it may be determined whether any prejudice resulted from the error.’ While the Lockridge Court did not explicitly hold that the Crosby procedure applies under the circumstances of this case, we conclude this is the proper remedy where, as here, the trial court was unaware of and not expressly bound by a reasonableness standard rooted in the Milbourn principle of proportionality at the time of sentencing.
People v. Gatzke, supra.
Finally, the Court of Appeals explained that under the
Crosby procedure, which `offers a measure of protection to a defendant[,]’ `a defendant is provided with an opportunity “to avoid resentencing by promptly notifying the trial judge that resentencing will not be sought.’” People v. Stokes, supra . . . .Given the possibility that defendant could receive a more severe sentence, defendant should be provided the opportunity to avoid resentencing if that is his desire. People v. Stokes, supra.


You can, if you are interested, read more about the facts in this case and the legal proceedings in the news stories you can find here and here.
Posted by Susan Brenner at 10:05 AM