The White House, the Cell Phone and Consent 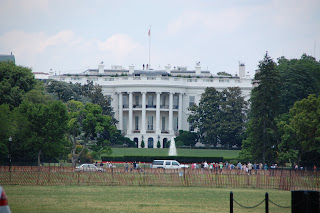 After being charged, Wright-Darrisaw moved to “suppress information displayed on her cell phone” during her interview with a U.S. Secret Service Special Agent who was investigating the threat against the President.  U.S. v. Wright-Darrisaw, supra. (She also moved to suppress certain statements she made during that interview, but this post only examines the motion that targeted the cell phone information.)


This is how the U.S. Magistrate Judge, to whom the federal district court judge initially referred Wright-Darrisaw’s motion to suppress, explained the encounter between her and the Secret Service Agent:


On March 3, 2012, United States Secret Service Special Agent Joel Blackerby was involved in an investigation relative to threats allegedly made by . . . Christine Wright–Darrisaw, against the President of the United States. . . . Blackerby had been searching for [her] for over a week, and his `investigation revealed she had class at [Monroe County Community College].’ . . . . Blackerby determined that his `best chance’ of locating [Wright-Darrisaw] to speak with her about the alleged incident would be to find her at Monroe County Community College (`MCC’). . . .


Hull and another MCC security officer accompanied Blackerby to the classroom where [she] was taking her class. . . . Blackerby was carrying a firearm, but it was not openly displayed. . . . The MCC security officers were not carrying firearms. . . . Hull knocked on the door and advised the professor that he needed to speak with Wright–Darrisaw. . . . [She] agreed to speak with the officers out in the hallway. . . .


Once [she] was in the hallway, Hull explained to her that Blackerby needed to speak with her, and Blackerby identified himself and `gave her a brief description of the scope of the investigation, why I needed to speak with her.’  Specifically, Blackerby told [Wright-Darrisaw] that he is `a special agent with the Secret Service and [was] currently investigating a threat that was made to the President.’ . . .  Blackerby, Hull and Wright–Darrisaw then walked about 30–40 feet down the hall to a bench to continue their conversation. The other MCC security officer remained at the other end of the hall and did not participate in the questioning.


Blackerby looked at [Wright-Darrisaw’s] cell phone for `[a] couple seconds.’ . . . Blackerby never took the cell phone from [her], and never touched her phone or `scrolled’ through it in any way. . . . Blackerby asked [Wright-Darrisaw] `about call logs; the call history, incoming and outgoing calls in her phone,’ and asked if he could see the call logs on her phone.
[She] said `no,’ refused to show Blackerby her call logs or call history, shut her phone off and placed it back in her purse. . . . At that point, [Wright-Darrisaw’s] demeanor started to change, as she became `a little more agitated’ and `[a] little more confrontational verbally.’ . . .. At the start of the interview, [her] demeanor had been `[v]ery polite, very open.’


The opinion also explains that during the interview, Blackerb showed


[Wright-Darrisaw]  two forms: first, a `consent form’ known as a 1945 Standard Service Form (`SSF); and second, a voluntary consent to search form. . . . The 1945 SSF form is used by the Secret Service during protective investigations to allow the Secret Service `to view all psychiatric records pertaining to [defendant] in the United States.’ . . . Wright–Darrisaw refused to sign the 1945 SSF form. . . .


Blackerby also asked [her] to sign the voluntary consent to search form so that he could search the vehicle she had on the MCC campus that day. . . . Wright–Darrisaw refused to sign the consent to search form. . . .. Upon being asked to sign the two forms, [she] became even more `agitated and, at that point, Blackerby decided to terminate the interview. . . . Blackerby thanked [Wright-Darrisaw] for speaking with him and told her `you're free to go back to class if you wish.’ . . .


The opinion also notes that the interview


lasted approximately twenty minutes. . . . During the interview, [Wright-Darrisaw] never asked to leave and the officers never told her that she had to stay or that she could not go back to her classroom. . . . [Wright-Darrisaw]  never asked for an attorney. . . .
Blackerby never told [her] she was under arrest or  had to speak with him, never threatened her, never made any promises to her, and never showed or used any type of restraints, handcuffs or zip ties or attempted to physically block her or prevent her from moving. . . . Wright–Darrisaw was never read her Miranda warnings. . . .


As the last comments suggests, these factors go primarily to Wright-Darrisaw’s motion to suppress her statements, as she claimed she was in “custody” during the interview and therefore should have been given her Miranda warnings before it began. U.S. v. Wright-Darrisaw, supra.  As Wikipedia notes, Miranda warnings have to be given to suspects who are “in custody,” i.e., have been arrested or otherwise deprived of their freedom of movement (so they cannot simply walk away or otherwise terminate the interview).  The judge found Wright-Darrisaw was not in custody for Miranda purposes because neither Blackerby not Hull ever indicated to her that she was not free to leave or otherwise deprived her of her freedom of movement.  U.S. v. Wright-Darrisaw, supra. (That finding implicitly plays into the denial of the motion to suppress, as it goes to the voluntariness of her consent.)


That brings us to her motion to suppress the cell-phone information. It was based on Darrisaw-Wrights rights under the 4th Amendment, which creates a right to be free from “unreasonable” searches and seizures. As I have explained in other posts, to be “reasonable” a search/seizure has to be conducted (i) pursuant to a valid search (and seizure) warrant or (ii) pursuant to one of the exceptions to the warrant requirement, which includes consent.


As I have also explained in earlier posts, to be valid, a consent to search and/or seizure property has to be given by someone who has the authority to consent (owner and/or user of the property) and has to be given voluntarily.  There was no dispute in this case about the first factor; the issue was whether the consent was given voluntarily. The opinion notes that the U.S. Magistrate Judge held a hearing on the motion to suppress and that


“[a]t the conclusion of the suppression hearing, the Court confirmed with defense counsel that the fact at issue was whether the information obtained from the defendant's cell phone was seized involuntarily by Blackerby, or whether it was voluntarily displayed by [Wright-Darrisaw] to Blackerby.


The Supreme Court has `long approved consensual searches because it is no doubt reasonable for the police to conduct a search once they have been permitted to do so.’ Florida v. Jimeno, 500U.S. 248 (1991). `The standard for measuring the scope of a suspect's consent under the Fourth Amendment is that of ‘objective’ reasonableness—what would the typical reasonable person have understood by the exchange between the officer and the suspect?’ Florida v. Jimeno, supra.


The opinion then explains that the evidence in this case establishes that Wright-Darrisaw
told Blackerby the White House's phone number was `in her cell phone contacts,’ took her cell phone out of her purse, `opened it up, pulled [the White House telephone number] up and turned [the phone] and showed it to’ Blackerby. . . . Blackerby looked at [her] cell phone for only `[a] couple seconds,’ never took the cell phone from [her] and never touched the phone or `scrolled’ through her call log. . . .


The court then found that it was


Wright–Darrisaw was obviously aware of her right to refuse to consent to a search of her phone as she exercised that right when Blackerby sought further information. In sum, the Court finds the Government has met its burden of proving that [Wright-Darrisaw’s] consent for Blackerby to view the information on her cell phone was voluntary.


The judge therefore denied Wright-Darrisaw’s motion to suppress the cell-phone evidence (and, for the reasons noted above, her statements to Blackerby). U.S. v. Wright-Darrisaw, supra.  You can see a photo of Wright-Darrisaw and read more about the facts in the case in the news story you can find here.