Private Searches, the 4th Amendment and the Cell Phone 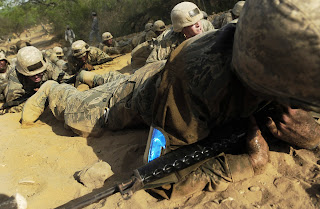 U.S. Air Force Technical Sergeant (E–6) Samuel A. Wicks is charged (in what I assume is a court-martial) with

violating a lawful general regulation by wrongfully attempting to develop and conduct personal and/or sexual relationships with three female airmen while they were trainees and he was a military training instructor (MTI) at Lackland Air Force Base between 2010 and 2011; engaging in indecent conduct with one of those trainees by sending her a sexually explicit video-recording; and obstructing justice by telling one of the trainees to lie to investigators about her personal contact with [him].

He moved to suppress “all evidence found during an analysis of [his] cellular phone as well as all derivative evidence”; the judge granted the motion and found the prosecution “had failed to satisfy its burden of showing that the evidence would have been inevitably discovered.”  U.S. v. Wicks, supra. When the judge denied a request that he reconsider his ruling, the prosecution appealed the ruling to this court pursuant to Article 62 of the Uniform Code of Military Justice. U.S. v. Wicks, supra.

The appellate court began its opinion by noting that it reviews a ruling on a motion to suppress “for an abuse of discretion” and considers the evidence in the light most favorable to the prevailing party, which was Wicks. U.S. v. Wicks, supra.  It then explained how he came to be charged:

[Wicks] was a military training instructor (MTI) at Joint Base Lackland, Texas, whose duties included instructing new recruits during basic training. At one point, he developed a personal relationship with TSgt Roberts, a fellow MTI at Lackland. In November of 2010, while the two were at [Wicks’] house, Roberts began to look at text messages on [Wicks’] smart phone (phone) while he was asleep. The military judge did not make findings of fact about what Roberts specifically observed during that viewing. By early December 2010, Roberts and [Wicks] were no longer involved in a personal relationship.

Approximately three weeks later, Roberts confronted [him] about the information she had seen on his phone. He acknowledged sending the text messages and told Roberts to `get out of his face.’ The two parted company without any discussion about the whereabouts of the phone.

In the May-June 2011 time frame, [Wicks] contacted LB and told her a co-worker had taken his phone and there might be an investigation. [Hes] was LB's MTI during basic training between December 2010 and February 2011 and the two stayed in contact until April 2011. He told her not to worry and, if asked, to say she and [he] had no contact after she graduated from basic training. Her impression was that [Wicks] was a little worried when he talked to her and was encouraging her not to say anything.

concerning an ongoing investigation into MTI misconduct at Lackland. At the time of this meeting, [Wicks] was not suspected of wrongdoing. . . . Roberts told the detective she had seen text messages on [Wicks’] phone she believed was [sic] evidence of misconduct. Roberts told AR she had downloaded the contents of [Wicks’] phone onto her iTunes account while he was asleep. She also provided e AR with the last names of two prior trainees (SrA LB and A1C SW).  During the interview, Roberts told AR she confronted [Wicks] about the information she discovered on the phone and that [he] acknowledged having sent the text messages.
The next day, Roberts gave AR the SIM card from [Wicks’] phone, but did not inform her of how she obtained the card. Although AR did not know Roberts had stolen the phone and SIM card, she believed that the data belonged to [Wicks] and had been taken from him without his consent or knowledge. AR spoke to the base legal office, but did not request a search authorization to review the contents of the phone. The SIM card was subsequently analyzed but no information was found.

On 17 January 2012, Roberts brought [Wicks’] phone to AR. Roberts lied to the detective, saying it belonged to a third person. After Roberts left, AR turned on the cell phone and reviewed an indeterminate number of text messages. When she did the search, AR was unaware of specifically what text messages Roberts had previously seen.

All of this is important because, as I have explained in prior posts, the 4th Amendment’s guarantees that citizens will be free from “unreasonable” searches and seizures only apply to searches and/or seizures conducted by law enforcement officers.  Those guarantees do not apply to conduct initiated by a private citizen . . . or, as they are usually know to “private searches” or “private seizures.” If you are interested, you can read more about that in this article.

As to that, the opinion explains that the military judge in this case found that

AR `did not mirror the actions’ taken by Roberts and instead engaged in a `general search’ of the phone. The detective testified that there were so many texts in the phone that she reviewed and scrolled through them until something caught her attention. She did not make copies of the messages she reviewed nor take notes about what she saw as she anticipated a full analysis and extraction of the phone would be conducted.

During this initial review, AR recalled seeing a text referencing an airman's name (Amn KS) and, through a review of flight rosters, determined the appellee had been the MTI for an airman by that name. She also saw a picture of a female airman dressed partially in a military uniform.

This review allowed AR to

corroborate some of the information provided by Roberts. She again spoke with the legal office for guidance and was told to get the information from the phone. There appears to have been no discussion concerning a need to obtain a search authorization before analyzing the phone's contents. The phone was sent to the Bexar County Sherriff's Office for forensic analysis. After reviewing the results, AR realized [Wicks] was the only person whose information was on the phone (up to this point, Roberts had maintained that the phone belonged to someone other than [him]).

In granting the motion to suppress, the military judge found Roberts was “acting in her private capacity when she searched [Wicks’] phone in November 2010 and in seizing and searching the phone in May 2011”, and held that her actions did not violate the 4th Amendment. U.S. v. Wicks, supra (citing U.S. v. Jacobsen, 466 U.S. 109 (1984)). The judge also held, however, that

`to the extent [the detective] exceeded the scope of Roberts's review,’ it was in violation of the 4th Amendment as she was permitted under the law to `go only as far as th[at] private search.’ The military judge considered the `scope’ of Roberts's review to be limited to only the items she actually observed, and it was unlawful for the detective to inspect other text messages without a search authorization.

Because the Government was unable to show with sufficient specificity which text messages Roberts saw when she went through the phone, all evidence recovered by AR from [Wicks’] phone as well as any evidence derived from those texts (to include the information relating to LB) was obtained in violation of the 4th Amendment.

In reviewing the military judge’s ruling, the appellate court agreed with his conclusion

that Roberts's private searches of [Wicks’] phone do not implicate the 4th Amendment, no matter how unreasonably she acted. . . .  Accordingly, we conclude that the exclusionary rule was not triggered by any private invasion of [his] privacy.

It disagreed with his conclusion that “AR's review of the text messages was limited to the precise messages seen by TSgt Roberts.” U.S. v. Wicks, supra.  It noted that the key issue in the case was, as noted above, whether law enforcement “are limited to only examining files inspected by the private party (as the military judge found) or whether all readily observable data on the electronic device is within the scope of the initial private search and thus can be obtained by law enforcement.”  U.S. v. Wicks, supra.

several computer disks belonging to her husband. After viewing some . . . and finding child pornography, she turned all the disks over to law enforcement. Detectives examined not only the files the wife had observed, but also examined the contents of all the seized evidence, to include disks the wife had not searched. During the search, additional child pornography was located on the disks that the wife saw.

The court concluded that `a defendant's expectation of privacy with respect to a container unopened by the private searchers is preserved unless the defendant's expectation of privacy in the contents of the container has already been frustrated because the contents were rendered obvious by the private search.’ U.S. v. Simpson, supra.  Thus, police do not engage in a new search for 4th Amendment purposes each time they examine a particular item found within the container. U.S. v. Simpson, supra.

to be persuasive and conclude the military judge incorrectly interpreted the law when he held that AR's search had to exactly mirror Roberts's search in order to be lawful. We read the Supreme Court precedent to be more concerned with the scope of the private party's search and the corresponding frustration of [Wicks’] right to privacy rather than creating an uncompromising rule based only on examining the Government's success in precisely replicating the physical intrusion already perpetrated by the private party.

The court also noted that AR’s viewing of Wicks’ phone

is analogous to examination of the computer disks in Runyan. Before Roberts took the phone, the phone and its contents were akin to a `closed container’ in which [Wicks] maintained a privacy interest. However, once Roberts breached the container by looking at the messages, [Wicks’] expectation of privacy with respect to all of the text messages (with the exception of the deleted texts) was frustrated. This fact is borne out by [Wicks’] own action in calling and telling her there might be an investigation as a result of the text messages.

It therefore held that AR did not violate

the 4th Amendment when she viewed different text messages located on the phone. AR's search was no different in character than the one conducted by  Roberts, even though the individual text messages that were opened by the former may have been different.

It also found that the

extraction of the text messages relating to the three women by the Sheriff's Office and the commercial company was not an unconstitutional expansion on the original private search. Each non-deleted text extracted by those entities was viewable by Roberts when she conducted her private search, and therefore [Wicks’] expectation of privacy in the texts was frustrated. Although the better practice would have been for AR to seek a search warrant prior to having those text messages extracted, we do not find the extraction to have been unconstitutional.