“Twittering” and the Murder Conviction 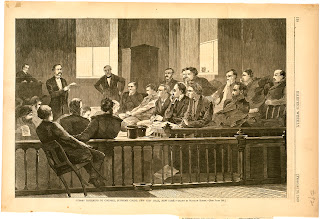 Since the convictions were reversed for juror misconduct, rather than for evidentiary issues or any other issues implicating the facts, I won’t go into detail on how Jefferson came to be the victim of homicide and robbery. Instead, I’ll focus only on the Twitter issue that resulted in the reversal of the conviction.

After being convicted, Dimas-Martinez filed a motion for new trial, claiming there

was juror misconduct, which warranted a new trial. Specifically, [he] asserted that a juror was tweeting during the trial, despite specific instructions from the judge to not do so and, thus, where it was apparent that the juror could not follow the judge's instruction in that regard, it could not be assumed that he followed the instructions with regard to the law. The circuit court denied the motion for new trial. This appeal followed.

Since the impact, if any, of the juror’s tweeting will depend, at least in part, on what the juror tweeted and when, I need to review what the opinion says about what this juror did. Apparently, Dimas-Martinez’s attorney informed the trial judge that a juror (“Juror 2”) had

been posting messages on his Twitter account during the trial. . . . [D]uring the noon hour on the day all evidence was submitted in the sentencing phase, Juror 2 tweeted `Choices to be made. Hearts to be broken. We each define the great line.’

[Dimas-Martinez’s lawyer] argued that this tweet seemed to be a comment about the proceedings, particularly when it was tweeted immediately after the close of the State's rebuttal case. [The lawyer also argued] that it was a flagrant violation of the [judge’s] instruction against twittering and demonstrated Juror 2 could not follow the court's instructions. Finally, [the lawyer] pointed out that one of the people following Juror 2's tweets was a reporter, with a Twitter account identified as Ozark Unbound.

The trial judge then questioned Juror 2 about what he had been doing:

THE COURT: Now, it has been brought to my attention that during . . . f the trial that you have from time to time, uh, twittered, whatever that is. Have you?

JUROR [2]: Um, I twittered like day three in court or, you know, something about -- not necessarily the case but just the time link about the court.

THE COURT: All right. But you haven't --

JUROR [2]: Not discussed any of the case.

THE COURT: Well, I want to ask you about a specific twitter and, uh, I want you to think about it and then tell me what it means.

THE COURT: Okay. It's says: Choices to be made. Hearts to be broken. We each define the great line. About 20 hours ago via text. Now what does that mean?

THE COURT: Would you prefer to come up here to the bench?

THE COURT: I was gonna bring you up here if you're --

THE COURT: Okay, go ahead.

JUROR [2]: What it means was, um, not only like to pertain to this case but also to future stuff. Um, obviously, whatever we as a jury decide -- you know, I'm not necessarily saying I know what's going to be decided, but we have to decide -- make a huge decision. Either way, you know, if we do decide something like it's just gonna -- a lot of people are either going to be mad about it watching the news because, you know, people have expressed to me you're on that court case, right? I can't talk about it. So I leave. So there's a ton of people watching this. And either way we decide, people are either going to be angry or people are going to be hurt either way. So what I was meaning by that was, you know, we have to define the great line of, you know, where we stand on a subject and, you know, what we have to choose -- decide in the future. And also `Define the Great Line’ was an Underoath album, and I thought I'd throw that in there along with my tweet.

JUROR [2]: No, because I'm waiting for the other 11 to help me come to a conclusion.

THE COURT: All right, have . . . you followed the Court's instructions about not discussing the particulars of this case with anybody?

for a juror to be qualified to sit on a panel he or she must be able to follow the instructions of the court. Specifically, counsel stated the following:

`This court told them not to tweet about this case. That is the problem. He did. This is a death penalty capital murder case, and we have a juror who has now flagrantly disregarded this court's instructions. That disqualifies him.’

After after being questioned about whether he tweeted during the trial, Juror 2 continued

The Arkansas Supreme Court ultimately found this was reversible error. It explained that unlike the facts in other cases involving jurors’ use of Twitter and other technology,

we have a situation where a juror admitted he disregarded the circuit court's instruction not to twitter about the case. And, even after the juror was questioned, admitted to the misconduct, and was again admonished not to discuss the case, he continued to tweet . . . during sentencing deliberations.

Moreover, not only did the judge specifically instruct the jurors not to tweet at the beginning of the trial, each time the court took a recess, it instructed the jurors not to discuss the case with anyone. . . . [T]he jury was repeatedly instructed to pay attention to all of the evidence, not to deliberate until all the evidence was presented, and not to discuss the case with anyone. More significantly, the circuit court instructed the jury prior to opening statements:

(Emphasis added.) And, again, each time the court went into recess, the circuit court would remind the jurors not to discuss the case with anyone.

The court explained that because of the

very nature of Twitter as an on online social media site, Juror 2's tweets about the trial were very much public discussions. Even if such discussions were one-sided, it is in no way appropriate for a juror to state musings, thoughts, or other information about a case in such a public fashion.

importance that jurors not be allowed to post musings, thoughts, or any other information about trials on any online forums. The possibility for prejudice is simply too high. Such a fact is underscored in this case . . . because one of the juror's Twitter followers was a reporter.

Thus, the media had advance notice that the jury had completed its sentencing deliberations before an official announcement was made to the court. This is simply unacceptable, and the circuit court's failure to acknowledge this juror's inability to follow the court's directions was an abuse of discretion.