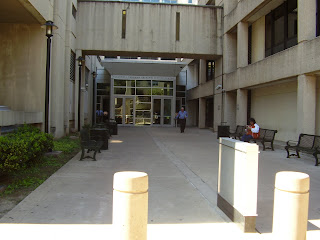 As I’ve noted in earlier posts, a judge has the power to hold one or more participants in a trial or hearing in contempt. As Wikipedia explains, contempt, or “contempt of court”, refers to a judicial order that declares someone has “disobeyed or been disrespectful of the court’s authority.”

the presence of the . . . judge . . . and may be dealt with summarily: the judge notifies the offending party that he or she has acted in a manner which disrupts the tribunal and prejudices the administration of justice. After giving the person the opportunity to respond, the judge may impose the sanction immediately.

outside the immediate presence of the court and consists of disobedience of a court's prior order. . . . A person cited for indirect contempt is entitled to notice of the charge and an opportunity for hearing of the evidence of contempt and to present evidence in rebuttal.

In September of 2010, the judge issued an order that denied his challenges to the December, 2009 contempt citation and to an August 2, 2010 judgment also finding him in contempt and imposed a “30 day jail sentence,” which Michael served. Newcomer v. Newcomer, supra.

During that hearing, [Megan] called [Michael’s] girlfriend, Stephanie Emch (`Emch’) . . . to testify regarding her business, a teen nightclub. Emch had brought some business records, but it was determined during her testimony that other records were missing which were covered by the subpoena. At the court's instruction, Emch returned the next morning, bringing additional business documents and continued her testimony. It was discovered that one month's bank statement was missing, despite her efforts to comply with the subpoena.

Emch about alleged text messages between her and [Michael], in court the previous day. Emch acknowledged that she had texted [Michael], but that it had been during a break in the proceedings, when both attorneys were in chambers with the judge, not during her actual testimony.

Newcomer v. Newcomer, supra. “In response to this information, the judge stopped the

divorce hearing at approximately 9:30 a.m. The court then ordered [Michael] and Emch to appear at 1:00 p.m. for a contempt hearing regarding the text messaging, `visual communication’ during the hearing that morning, and `issues relative to the question of whether the subpoena has been honored.’

Emch was able to retain counsel for that hearing, who requested a continuance so that a defense could be prepared. Over counsel's vigorous objections, the court denied the request for continuance and immediately held a hearing as to the `direct contempt’ of appellant and Emch. The court also addressed Emch's failure to bring certain business documents with her to court, including the missing bank statement and `potentially, other documents.’

At the contempt hearing, Emch testified, with regard to the first issue, that she had no

business background and was not an accountant or bookkeeper. She stated that her father, also not an accountant, kept the books for her business and had provided the records requested in the subpoena. After it was determined that the records were still incomplete, she had called her father that morning to bring whatever remaining records he had.

When she had attempted to tender those to [Megan’s] counsel prior to the contempt hearing, he refused them. Emch testified that, at 23 years old, she had never been subpoenaed before, had never testified or been in court before, and had thought she had complied with the subpoena when she brought the documents provided by her father. For her alleged failure to bring the requested documents, Emch was found in contempt, fined $200, and ordered to pay $250 to [Megan’s] attorney, for legal fees.

With regard to the texting, the judge

immediately found Emch in `direct contempt,’ without permitting her to give any further testimony, except in mitigation. Emch then testified that, although she was still `on the stand,’ she had texted [Michael] during a break in the proceedings. She stated that she had not texted during her actual testimony, but did not realize that it might be inappropriate because it was during a break. Emch stated that she was nervous about testifying and feared saying anything that might harm [Michael].

For her `direct contempt’ for the alleged text messaging, Emch was sentenced to two days in the county jail, to begin immediately at the close of her testimony. Emch's attorney and the court had a lengthy, animated discussion regarding the propriety of the proceedings with no notice given, Emch's relative naiveté regarding legal proceedings, and the unintentional nature of her actions. The court denied a request for a stay and dismissed the attorney's objections, stating, `You may take it to the Court of Appeals.’

The judge then also summarily found Michael to be in

direct contempt for engaging in texting with Emch. [Michael] also confirmed that the messaging was while Emch was on the stand, but the court was not in session, and the attorneys and judge were in chambers. [He] stated that no texting occurred during Emch's testimony and that he was also unaware that messaging was not permitted during the break. [Michael] was sentenced to serve five days in the county jail.

contempt for . . . texting to [Michael] Newcomer and failure to bring certain documents to court. Both contempt findings were criminal, since no purge conditions were given and the court's clear purpose was to punish Emch for perceived wrongdoing. . . . [T]he court abused its discretion in its finding of contempt for several reasons.

The Court of Appeals found that neither action constituted direct contempt, which meant the judge “was required and failed to give proper notice of its intent to hold Emch in contempt or to grant a continuance so a defense could be prepared.” Newcomer v. Newcomer, supra. The court also found that the record in the case “fails to establish sufficient evidence that Emch’s actions constituted civil or criminal contempt, direct or otherwise.” Newcomer v. Newcomer, supra.

The Court of Appeals explained that during her testimony the first day of the hearing,

Emch, a young person, clearly established that she was wholly unfamiliar with the legal system and extremely nervous about testifying. The record shows the court's attitude towards her was overly stern from the outset, including multiple commands for her to `speak up’ or be held in contempt, despite her obvious discomfort and anxiety.

The record also indicates that the text messaging occurred the day before the court’s directive regarding any `communication, visual or otherwise’ between Newcomer and Emch while she was on the stand. The texting occurred during a break in the proceedings, while the judge and attorneys were in chambers, not during her testimony or when the court was in session. In addition, the substance of the texts was never . . . shown to have had any effect whatsoever on Emch's testimony.

Although we disapprove of texting during court proceedings, under the facts of this case, we conclude that [Emch’s] actions during the court recess did not constitute proof beyond a reasonable doubt of criminal direct contempt. The judge did not witness the action, it did not interrupt or disrupt the proceedings, and there was no proof that it threatened the administration of justice. Therefore, the trial court erred in finding Emch in contempt for the texting.

Michael also appealed the divorce court judge’s holding him in contempt for his part in the texting and sentencing him to five days in the county jail. Newcomer v. Newcomer, supra. The Court of Appeals rather cursorily disposed of his arguments on appeal:

[Michael] Newcomer argues that the court's finding of direct contempt for texting during the break was not supported by sufficient evidence. . . . [He also] asserts the trial court applied the wrong standard. We agree.

For the reasons discussed in Emch's appeal of the texting issue, we conclude that no direct contempt was committed, and the trial court erred in finding [Michael] guilty by `clear and convincing’ evidence. Since the sole purpose of the jail sentence was to punish [him], the applicable standard for criminal contempt should have been used, i.e., beyond a reasonable doubt. The record does not establish that [Michael’s] actions constituted contempt.

Posted by Susan Brenner at 1:23 PM

read my book 'Cyber Crime: A New Horizon of Criminology' available at http://www.amazon.de/Cyber-Crime-New-Horizon-Criminology/dp/3843320497

nice. Now of course where is the ARREST order for this two-faced twit of a judge who makes me wonder if he/she isn't humping the guy's ex in the back room!

think if i was the girlfriend i'd now tell dumb twit that next time we wont' be in YOUR BALLPART we will be OUSIDE IT and there you WILL BE MINE!

Just curious...When was the successful appeal decided,... long after the girl had to serve her two day sentence? Was there any action taken to make the girl 'whole'?...like having the judge apologize, or monetary reimbursement for the injustice?
I'm guessing that even though the judge clearly abused his authority, he received no penalty, but the girl is still missing two days from her life, a large amount of attorney fees, and only obtained a bitterness towards the justice system.

The opinion says the contempt citations were entered in early December (December 13), and the Court of Appeals issued this decision on December 16, 2011, so it took about a year to resolve this.

I don't know if Michael Newcomer and/or Ms. Emch ever actually went to jail. I'm assuming that their appeal of the contempt citations put the citations on hold, so that they didn't have to go to jail . . . but I could be wrong.

As to attorney fees, I meant to mention this in the post but forgot: The Court of Appeals ordered the Appellee -- Megan Newcomer -- to pay "the costs of this appeal" under Ohio Appellate Procedure Rule 24. Newcomer v. Newcomer, supra. Rule 24(B) defines "costs" as " an expense incurred in preparation of the record including the transcript of proceedings, fees allowed by law, and the fee for filing the appeal."