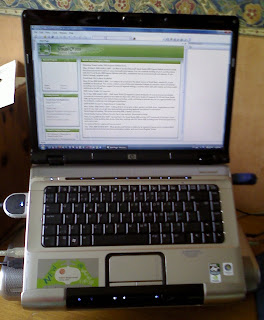 Under § 496(a), anyone “who buys or receives any property that has been stolen or that has been obtained in any manner constituting theft . . . knowing the property to be so stolen or obtained . . . shall be punished by imprisonment in a state prison . . . for not more than one year.”

That brings us to the facts in this case. This is what the opinion has to say about how the prosecution arose:

They entered the office, took the laptops and other items, and left. . . . Cerboni did not recognize the men. One of the laptops . . . was manufactured by Hewlett Packard and had a webcam on top. The laptop had three years of business information on it. Cerboni also had PayPal and eBay accounts on the laptop, which allowed him to buy items on the Internet.

On July 14, Cerboni received an e-mail message that he had made purchases using the online accounts . . . on that day. Cerboni did not make the purchases and stopped payment for the items ordered.

According to the e-mail, the items were to be shipped to . . . `Johnny Ojamoney’ at an address on Mission Inn Avenue in Riverside. Cerboni did not know Ojamoney and knew no one who lived at the Mission Inn Avenue address. Cerboni called law enforcement to report the transaction.

Riverside Detective Lisa Meier investigated the burglary and stolen laptops. [She] reviewed the information from Cerboni's PayPal and eBay accounts and determined that the property purchased was to be delivered to 2582 Mission Inn Avenue in Riverside. Meier [searched] Department of Motor Vehicle records and discovered [Oren] was listed as living at that address. Meier could find no information in the records for a person named Johnny Ojamoney.

He also said he thought Shorty was “an East Side gang member” but “did not know how to contact” him. People v. Oren, supra. Finally, Oren said he fixed computers for people.

He did see the information for Global Cleaning Technology on the computer but never called them to inquire whether their laptop had been stolen. He claimed to have gone to the Hewlett Packard Web site and put in the serial number to check if the laptop had been stolen, but nothing came up.

[Oren said] he purchased the laptop for $180. He admitted he deleted the Global Cleaning Technology information from the computer. [Oren] at first thought the laptop may have been stolen, but when he checked the Web site and it was not listed as stolen, he was satisfied it was not stolen.

Oren went to trial on the receiving stolen property charge, was convicted by the jury and was sentenced to “formal probation for three years and 120 days to be served in county jail (in a work release program).” People v. Oren, supra. At trial, Darlene Ramirez, “who had been romantically involved with [Oren] for eight years, lived with” him and “helped him with his business of repairing computers”. People v. Oren, supra. She claimed the “first thing she and [Oren] did when they received Cerboni’s laptop” was to check the manufacturer’s website to “ensure it was not stolen.” People v. Oren, supra.

Oren’s appeal was based on the judge’s refusing to instruct the jury on the mistake of fact defense. People v. Oren, supra. As Wikipedia notes, in a jury trial the judge instructs the jurors on the law they must apply to the evidence presented in order to decide the defendant’s guilt or innocence.

In analyzing Oren’s argument on appeal, the Court of Appeals noted that to uphold a conviction for receiving stolen property, “`the prosecution must prove: (1) the property was stolen; (2) the defendant knew the property was stolen . . . ; and, (3) the defendant had possession of the stolen property.’” People v. Oren, supra (quoting People v. Russell, 144 Cal. App. 4th 1415 (2006)). It also noted that the mistake of fact issue arises under California Penal Code § 26, which states, in part, that “[a]ll persons are capable of committing crimes except . . . [p]ersons who committed the act . . . charged under a[] . . . mistake of fact, which disproves any criminal intent.” People v. Oren, supra.

This is the instruction Oren said the trial judge should have given to the jury:

The defendant is not guilty of

If the defendant’s conduct would have been lawful under the facts as (he/she) [reasonably] believed them to be, (he/she) did not commit.

If you ﬁnd that the defendant believed that

California Criminal Jury Instructions (CALCRIM) No. 3406 (which you can find here). As the Court of Appeals noted, the instruction is intended to embody the principle that “`people do not act unlawfully if they commit acts based on a reasonable and honest belief that certain facts and circumstances exist which, if true, would render the act lawful.’” People v. Oren, supra (quoting People v. Reed, 53 Cal. App.4th 389 (1996)).

In arguing that the instruction should have been given in his case, Oren relied on the California Court of Appeals’ decision in People v. Russell, supra. People v. Oren, supra.

In Russell, the defendant took an old motorcycle that was outside a motorcycle repair shop by a trash dumpster. [He] testified at trial he believed the motorcycle had been abandoned based on its condition and his understanding that the repair shop put all of the motorcycles in the shop after closing. . . .

The Court of Appeals found that the evidence that Oren “believed the laptop was not stolen property was far weaker than” the evidence in Russell. People v. Oren, supra.

There is no dispute that while [Oren] was in possession of the laptop computer he saw that it contained information belonging to Global Cleaning Technology and that Cerboni's accounts were used to order items to be shipped to [Oren’s] address. [He] never tried to contact Global Cleaning Technology to determine if the laptop was stolen and he immediately deleted all of the business information.

When Meier arrived at [Oren’s] home, he immediately advised her that he knew why she was there. [Oren] told the police he had purchased the laptop from a gang member for $180, which was much less than it was worth. In addition, [he] admitted he had put black tape over the camera, which Meier surmised, without objection, was to conceal that he had the laptop.

The only evidence [Oren] did not have knowledge that the laptop was stolen was his statement to police after he was arrested that he had checked the Hewlett Packard Web site and it was not listed as stolen. Unlike Russell, [Oren] did not consistently testify that he believed the laptop was not stolen property, and the minimal evidence that he checked Hewlett Packard to see if was stolen was substantially contradicted by the above evidence.

The trial court is not required to give a[n] . . . instruction on any evidence of mistake of fact; here, it was minimal and insubstantial.

The court also explained that the jury was instructed that

The jury was further instructed that in order to find defendant guilty, it must find that: `When defendant bought, received, concealed, or withheld or aided in concealing or withholding the property, he knew the property had been stolen.’ (CALCRIM No. 1750.)

overwhelming. [He] was in possession of the stolen laptop and had wiped it clean of Cerboni's information. During the time the laptop was in [Oren’s] possession, access was made to Cerboni's PayPal and eBay accounts, and items were to be shipped to [Oren’s] address. [He] immediately was aware when the police arrived at his home what item they were looking to recover.

[He] had attempted to conceal that he had the laptop by placing black tape over the webcam and had changed his story regarding his possession of the laptop. Based on the foregoing, there is no reasonable probability that the jury would have come to a different result had it also been given an instruction on the defense of mistake of fact.

I don't love this judgment, but based on the facts presented here I do not find it appalling. The fact that he was ordering something online to his address from another person's account goes a long way in convincing me that Oren knew or should have known the laptop was stolen. People don't willingly disregard computers with personal information still intact. The problem is the word KNOW. Did he know? That implies a significant degree of certainty...which legally he probably didn't have. Should he have known - yeah of course, but that's not how the law works unless it says so. It really depends on how CA defines knowledge and how that can be deduced/proven.
As to whether the instruction should have been given I'm on the fence, but tend to agree. His actions really do seem to contradict the over all mistake of fact defense. It seems remote that because the HP website didn't say the machine was stolen that one could be even close to comfortable relying on that info alone. The weight of the other facts makes this singular fact less substantial. The totality of the evidence suggests that this one fact stood alone in a sea of evidence pointing toward a guilty mind. Besides, he had to know it was a crime to order goods off the internet using another person's credit card. If he didn't hesitate to commit that crime, why not possess some stolen property right?

I disagree with this judgment and I feel mr Oren's rights were violated! I don't see how this is considered a cyber crime.