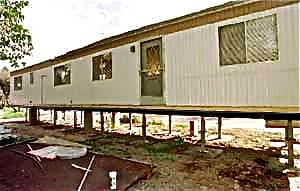 After being convicted of murdering Craig Durand, James O’Neill appealed, arguing in part that the trial judge erred in admitting an email Durand sent to a friend on he day he died. Commonwealth v. O’Neill, 80 Mass. App. Ct. 1109, 954 N.E.2d 591 (Massachusetts Court of Appeals 2011).

We’ll get to the admissibility of the email in a moment; first, I need to outline how, and why, Durand died. This is how the prosecution’s brief on appeal outlines the facts that led to the murder:

Prior to 2003, [Durand] lived with his mother at 65 Victoria Lane in Marlborough, in a mobile home in the Jen-Lo Trailer Park. Following his mother's death in 2003, [he] took in a series of roommates to help pay the bills. In June of 2003, [O’Neill] moved into [Durand’s] mobile home. [They] were not previously acquainted.

Within months, by the fall of 2003, [O’Neill] had developed a dislike for [Durand]. [He] referred to [Durand] as `numbnuts’ and `a jerk.’ He complained on multiple occasions to different people that [Durand] drank too much beer, that he was an `asshole to live with,’ that he could not live with [Durand] anymore, and . . . was looking for a new place to live. By December of 2003, [O’Neill] . . . owed [Durand] back rent. [Durand] told him he wanted the rent money by February 1st.

A few months after [O’Neill] moved in with [Durand], [Durand] got a new computer. [He] The victim gave [O’Neill] his old computer, but [O’Neill] helped himself to [Durand’s] new computer anyway. He did this by picking the lock on [Durand’s] bedroom door while [he] was at work to gain access to it, against [Durand’s] stated wishes. [O’Neill] even boasted to his friend Tom Gaudette that he was exploiting [Durand] in this way.

[Durand] had an account with America Online (`AOL’). [He] became suspicious that [O’Neill] was wrongfully gaining access to the internet through this AOL account. Consequently, at around 11:30 A.M. on January 1st, [Durand] called a representative at AOL and learned that in mid-November, an AOL account had been opened using [his] and billed to [him]. The account was immediately canceled as fraudulent, and AOL extended a refund to [Durand].

At around 4:30 P.M. that same day, [Durand] sent an e-mail to his on-line friend, Ms. Quandahyl, expressing his anger at the nerve of [O’Neill], and his frustration that [O’Neill] was taking advantage of him. In the e-mail, [Durand], knowing the fraudulent account was now canceled, also wrote that he `can't wait for [O’Neill] to go into his room and try to get on-line.’

According to O’Neill’s brief on appeal, on the

afternoon of January 2, 2004, [he] opened the door of his neighbors' trailer and told them that Durand was dead. Police and fire were summoned, arriving at approximately 3:30 p.m. Tr. 3/202, 3/250. O'Neill led firefighters to the scene telling them that he returned home and found Durand unresponsive.

O’Neill was charged with Durand’s murder on May 10, 2004 and convicted by a jury of murder on October 19, 2006. Brief of the Defendant-Appellant, supra. Prior to trial, the prosecution filed a motion in limine asking the trial judge to allow it to introduce into evidence at trial the email Durand sent Debbie Quandahyl on the day he died. Brief of the Defendant-Appellant, supra. This, according to O’Neill’s brief on appeal, is what the email said:

`This morning my roommate was going to work a couple of hours and get paid cash. Before he left, he showed me a printout of something that he got off the -- got off his computer. I asked him, “how did you get online?” He said, “I am now on AOL, and I used it on my card.” He doesn't have a charge card so I knew something was fishy.’

`I called AOL, and they told me that there was another account on my name with the billing being done through the phone bill. I was and am pissed to say the least. I canceled it, and I can't wait for Jim to go to his room and try to get online. I asked AOL to put a block on the access, but they said I would have to go through the phone company, which I will tomorrow.’

`The nerve of this guy is unbelievable. He owes me over $600 in rent. Last week, I told him to be caught up by February 1 or get out. Right now, he's only working part time. He gives me $100 each week, but that is not enough to cover it. Debbie, I cannot -- I cannot stand getting up at 4:30 in the morning taking a shower and going to work knowing that there is an asshole living in my home taking full advantage of me.’

Brief of the Defendant-Appellant, supra.

As I explained in an earlier post, the federal system and all the states have rules that bar the admission of hearsay evidence unless it falls within one of several recognized exceptions to the rule barring its use. As to what hearsay is, state statutes and court rules, like Rule 801(c) of the Federal Rules of Evidence, define hearsay as “a statement, other than one made by the declarant while testifying at the trial or hearing, offered in evidence to prove the truth of the matter asserted.” So this type of evidence is excluded unless it falls into one of the exceptions I noted above.

As I explained in the earlier post, hearsay – which is second-hand evidence -- is excluded as a matter of common sense and fairness. If it weren’t excluded, John Doe could take the stand and say Jane Doe told him that the defendant – Richard Roe – who’s on trial for murder confessed to the whole thing.

That puts Roe in a bad spot: If the jury believes what John says – i.e., that Jane heard Roe confess to the murder for which he is on trial – they’re almost certainly going to convict him (unless he’s arguing self-defense, say). Roe can try to show John Doe is a liar or is mistaken or is insane or otherwise can’t be believed, but neither he nor his lawyers can do much with Jane Doe because she isn’t there . . . she’s a declarant who isn’t testifying at the trial.

Allowing second-hand evidence – someone’s repeating what someone else allegedly told them – opens up all kinds of possibilities for unfairness and error. We’ve probably all played that rumor game where something gets whispered to one person and passed along and comes out totally garbled. That’s the kind of inadvertent error hearsay rules are intended to guard against; they’re also intended to guard against fabrication or deceit, i.e., intentional error.

This brings us back to the state of mind hearsay exception. As a law review article explains, this exception to the hearsay rule

provides that a statement is not hearsay if it is `[a] statement of the declarant's then existing state of mind, emotion, sensation, or physical condition . . . .’ `The underlying rationale for this hearsay exception is that statements concerning the declarant's then existing physical or mental condition are trustworthy because their spontaneity makes them at least as, if not more, reliable than testimony at trial on the same subject.’

In its motion in limine, the prosecution argued that the email was admissible “`to show victim's state of mind immediately prior to his death and as evidence of the defendant's motive.’” Brief of the Defendant-Appellant, supra. O’Neill objected to the admission of the email on the grounds that it was “hearsay and overly prejudicial.” Brief of the Defendant-Appellant, supra.

The trial judge overruled O’Neill’s objection and ordered that the email be read to the jury. Commonwealth v. O’Neill, supra. Before it was read, though, the judge instructed the jurors that the email

is not offered for the truth of whatever may be stated or contained in the document itself but rather as evidence. If it is in your determination of the victim's, alleged victim, state of mind in connection with the creation and apparent sending this e-mail on the date and time apparently indicated on the e-mail.

Again, these are all facts as to which you have to make the ultimate determination as to their validity, accuracy, credibility and the like. But the document is offered only as it may relate to the victim's state of mind in this case.

Brief of the Defendant-Appellant, supra.

`[t]he state-of-mind exception to the hearsay rule calls for admission of evidence of a murder victim's state of mind as proof of the defendant's motive to kill the victim when and only when there also is evidence that the defendant was aware of that state of mind at the time of the crime and would be likely to respond to it.’

In upholding the trial judge’s admission of the email, the Court of Appeals noted, approvingly, that the prosecution

According to the news story you can find here, O’Neill was sentenced to life in prison but will be eligible for parole after serving 15 years.