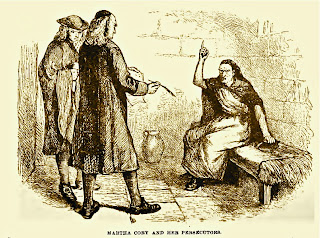 In the U.S. justice system, prosecutors have broad discretion in deciding whether to charge someone with a crime and, if they do, to decide what and how many crimes they will be charged with. Prosecutorial discretion is not, however, unlimited.

As a law review article notes, courts “protect individuals from prosecutorial decisions that are based on unconstitutional motives or executed in bad faith. Prosecutors may not engage in selective prosecution, which denies equal protection of the law, or vindictive prosecution, which violates due process rights.” 38 Prosecutorial Discretion, Georgetown Law Journal Annual Review of Criminal Procedure 219, 222 (2009).

This post is about a case in which the defendant claimed he was the victim of vindictive prosecution. As the law review article explains, the due process clauses of the Fifth and Fourteenth Amendments prohibit a prosecutor from using criminal charges

Prosecutorial Discretion, supra. As the article notes, actual vindictiveness “is often difficult to establish.” And the U.S. Supreme Court has noted that proving vindictive prosecution is particularly difficult when the claim arises in the pre-trial context: In U.S. v. Goodwin, 457 U.S. 368 (1982), the Court explained that “in the pretrial context, where `the prosecutor's assessment of the proper extent of prosecution may not have crystallized,’ reindictment on a more serious charge is much less likely to be motivated by prosecutorial vindictiveness than when a charge is changed after a trial begins or . . . a conviction has been obtained and the state has had the opportunity to fully assess its case.” Prosecutorial Discretion, supra.

A year later, in August 2004, Bucci started a website, whosarat.com, where individuals could post information about government informants. Six months after Bucci started this website, the Government . . . filed a superseding indictment which charged Bucci and Martin with the same two drug-trafficking counts, but increased the amount of marijuana charged in the alleged conspiracy from 100 to at least 1000 kilograms. The increased amount of marijuana charged raised the . . . mandatory minimum sentence Bucci faced for the conspiracy offense, if convicted, from five to ten years.

Bucci thought the “Government's decision to file the two superseding indictments . . . amounted to vindictive prosecution intended to punish him for exercising his First Amendment right to operate his website, whosarat.com.” U.S. v. Bucci, supra. He tried to prove vindictive prosecution by “demonstrating circumstances establishing a likelihood of vindictiveness sufficient to create” the presumption noted above, but he was raising the claim in the pretrial context, where it is particularly difficult to establish. As the Court of Appeals noted, “[i]n our system, so long as the prosecutor has probable cause to believe that the accused committed an offense defined by statute, the decision whether or not to prosecute, and what charge to file or bring before a grand jury, generally rests entirely in [the prosecutor's] discretion.” U.S. v. Bucci, supra.

To obtain the evidence he needed to support his vindictive prosecution claim, Bucci “sought discovery from the Government” to support his claim, but “to obtain discovery, [he] first had to advance some evidence tending to establish his vindictive prosecution claim.” U.S. v. Bucci, supra. The trial court denied his discovery request, and the Court of Appeals upheld that decision:

Bucci relied on `statements of law enforcement and government officers . . . contained in . . . newspaper articles, documents, and security reports.’ While the statements . . . expressed serious concern about the danger to informants posed by postings made on Bucci's website, Bucci set forth no evidence suggesting this concern ever affected the prosecutors making the specific charging decisions in his case. To obtain discovery, Bucci must . . . . connect any vindictive animus to those making the challenged charging decisions in his case.

Bucci further relied on the circumstances attendant to his prosecution, asserting that the prosecutor all along had enough evidence to charge him with the added offenses and increased amount of marijuana, but did not bring those charges until after Bucci started whosarat.com. Assuming the Government had enough evidence to indict Bucci initially on the increased charges, this fact alone is insufficient to establish that the Government later filed the superseding indictments to punish Bucci for whosarat.com. . . .

I think it’s an interesting vindictive prosecution argument. In a post I did a couple of years ago, I noted that law enforcement officers and judges were very concerned about the Who’s A Rat? site, and I assume they still are, since it still seems to be going strong.

Earlier this year, the U.S. Court of Appeals for the Sixth Circuit commented that

[i]nmates who are known to have co-operated with the government are at risk for mistreatment while incarcerated. Not only is there grapevine gossip within the institution, but `snitches’ are tracked on internet accessible data bases. See the web site `Who's a Rat’ www. whosarat. com.

U.S. v. Gapinski, 561 F.3d 467 (2009). In 2008, a Pennsylvania district court judge noted that “[j]udges are very concerned over the accessibility [of information about informants] by people with evil intentions, as most visibly seen by the notorious website `whosarat.com.’” K.R. v. School District of Philadelphia, 2008 WL 4822041 (U.S. District Court for the Eastern District of Pennsylvania 2008).

In an aside, the Pennsylvania judge said some courts were considering taking steps to protect informant information contained in court files. According to a recent article, the

federal judiciary recently considered a proposal to restrict public Internet access to plea agreements in criminal cases. This proposal responded in large part to uproar over the Web site whosarat.com. . . . Because of the obvious threat this site posed to informants' safety and willingness to come forward, the federal courts wondered whether removing plea information from public Internet access on PACER would stem whosarat.com's impact. After considering the option . . . the Privacy Subcommittee under CACM decided to recommend against changing the national policy. Instead, the committee suggested district courts consider adopting local policies to protect the interests of plea bargainers as they see fit. Some federal courts now bar nonparty remote access to plea documents. . . In other courts, plea agreements are excluded from the public record entirely. . . .

Bucci’s problem, of course, was that he couldn’t show any causal connection between the uproar over the site he created and the decisions that incrementally increased the charges against him and the liability he faced. If he had been able to do so, then he might have had a viable vindictive prosecution claim, since I assume he could show he had a First Amendment right to operate the website. (As I noted in my earlier post on Bucci’s site, he might also have been able to show he had Fifth and Sixth Amendment rights to operate the site if it was being used to help him prepare his defense to the charges against him.)

Posted by Susan Brenner at 4:03 PM