Miranda and the Fifth Amendment Bummer 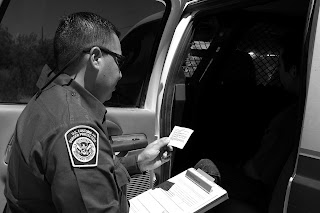 More precisely, this is a follow-up to Jeremy R. Fishman’s comment on my 5th Amendment Bummer post.

In that post, which updated an earlier post on the Boucher case, I explained that a federal judge had held that Boucher couldn't take the 5th Amendment privilege against self-incrimination as the basis for refusing to surrender the key needed to access his encrypted hard drive.

In his comment, Jeremy raised the issue of Boucher’s being “in custody” which, as I noted in a reply comment, gets us into a different standard – the Miranda rules. Since it’s only logical to assume Miranda comes up when someone is being detained by law enforcement and is asked to do something, I thought I’d do a post parsing the extent to which the Miranda rules do, and do not, apply in this situation.

I can’t find any cases in which Miranda’s applicability to a Boucher-style scenario has come up, so I’m going to use a hypothetical to analyze the issues. We’ll essentially assume the facts in the Boucher case: John Doe arrives at the O-Hare airport on a flight from London; as he goes through Customs, he’s flagged for secondary (more intensive) screening. Doe’s carrying a laptop. The Customs officer takes the laptop and turns it on; it boots up, and the officer tries to examine the contents of the laptop, but can only see part of the files it contains. As in the Boucher case, part of the hard drive has been partitioned as Drive Z; the partitioned drive is encrypted, so the Customs officer can’t access the files it contains.

If the officer had probable cause to believe the laptop contained child pornography, he could (i) arrest Doe and/or (ii) get a warrant to search the contents of the laptop. I’m not assuming probable cause because I don’t think the circumstances outlined above can support probable cause and because probable cause wouldn’t alter the Miranda analysis we’re about to pursue.

As long as Doe is in “custody” – as long as he is either under arrest or his freedom of movement has been restrained in a fashion analogous to an arrest – he is entitled to the protections of Miranda. As Wikipedia explains, that means the officer must give Doe the Miranda warnings (right to remain silent, right to have an attorney present during any questioning, right to have an attorney appointed) and find out if Doe wants to waive the rights or invoke them. If Doe invokes the right to silence and/or the right to an attorney, the officer cannot ask him any questions; if Doe waives one and invokes the other right, the officer still cannot ask him any questions; the officer can only question Doe if Doe waives both the right to remain silent and the right to an attorney. Since the Miranda rules apply regardless of whether Doe has been arrested or is only being detained while the officer tries to determine if there is child pornography on the laptop, it doesn’t matter whether the officer has probable cause or not.

Probable cause is only relevant insofar as the officer might want to obtain a warrant to search the laptop. As I noted in my posts on the Boucher case, getting a warrant in this situation won’t help the officer pursue the child pornography inquiry because Drive Z is encrypted and law enforcement officers currently have no way of breaking encryption.

In the Boucher case, the government did what I suspect it will typically do in cases like this: have a grand jury issue a subpoena to the person (Boucher or Doe) that orders him to surrender the encryption key to the grand jury. I suspect the government will use this procedure because, as I noted in my Boucher posts, a grand jury can compel someone to comply with its demands by locking them up until they do.

Law enforcement officers can’t do that. They can only ask the suspect to give them the encryption key, which brings us back to the alternative scenario we’re analyzing. If you recall where we were, the Customs officer has reasonable suspicion to believe there is child pornography on the laptop; the reasonable suspicion lets the Customs officer detain Doe for a “reasonable” period of time while the officer tries to (i) develop the probable cause he needs to arrest Doe and seize the laptop or (ii) decide he was wrong about the laptop’s containing child pornography.

The Customs officer has detained Doe, which means he’s in custody for the purpose of the Miranda rules. That means, as I noted earlier, that if the officer wants to ask Doe about the laptop, the encryption key or anything else (other than, say, if he wants a drink of water or to use a bathroom) he must (i) give Doe the Miranda warnings and (ii) get a valid waiver of the rights to silence and counsel from Doe. More precisely, under the Miranda rules, the officer cannot “interrogate” Doe unless he does both of these things. If he interrogates Doe without doing both of these things, he violates Miranda.

The Supreme Court has defined Miranda interrogation as words or actions by the police office that he should know are reasonably likely to elicit an incriminating response from the suspect. Rhode Island v. Innis, 446 U.S. 291 (1980). We’ll make the interrogation analysis really simple here; we’ll assume the Customs officer asks Doe to give him the encryption key for Drive Z. Asking someone a direct question constitutes interrogation under the Innis standard, so we have to decide what the consequences of the officer’s asking this question are, under Miranda.

Let’s consider what happens if the officer violates the Miranda rules by asking Doe for the encryption key and Doe answers the question, i.e., gives the officer the encryption key. (Asking the question without giving the warnings and getting a waiver would still violate Miranda, but we wouldn’t have any evidence to suppress.) In other words, Doe says something like, "OK, I'll give you the key to my hard drive. The key is ______________." (We're assuming, for the purposes of analysis, that Doe has committed the key to memory; I think the analysis will be pretty much the same even if he has to retrieve a key he's written down or is stored in something.)

In U.S. v. Patane, 542 U.S. 630 (2004), the U.S. Supreme Court held that a violation of Miranda (i) requires the suppression of statements (testimony) made by the suspect but (ii) does not require the suppression of physical evidence law enforcement obtains as a result of the suspect’s statements. In the Patane case, and in a number of other cases, the Court explained that the Miranda rules are not constitutional rules themselves and are not co-extensive with the 5th Amendment privilege against self-incrimination; they are, instead, a fabrication, a set of prophylactic rules the U.S. Supreme Court created to control what police officers can do when they are interrogating a suspect. In the Patane case, and other cases, the Court has held that the policy which justified imposing the Miranda rules on police interrogations does not require the suppression of evidence other than statements elicited in violation of the Miranda rules.

Where does that leave us? Well, to some extent it brings us back to the 5th Amendment analysis I applied in my Boucher posts. What happens if Doe answers the question and gives the officer his encryption key? Is the encryption key a statement (“testimony”) that must be suppressed because the officer violated Miranda? Or is it physical evidence the officer obtains as the result of a statement that violated Miranda? In other words, can the prosecution argue that (i) it can’t use the statements Doe made in the course of giving the encryption key to the Customs officer but (ii) can use the key itself because it is physical evidence, not testimony?

If the prosecution were to make such an argument, I strongly suspect that Doe’s attorney would respond with an argument along the lines of the act-of-producing-evidence-as-testimony analysis I outlined in my Boucher posts. That is, I suspect Doe’s attorney would argue that it is impossible to sever Doe’s statements from his act of giving the government the encryption key because both constitute “testimony” under the Fisher analysis I outlined in my Boucher posts.

If you look at the 5th Amendment bummer post, you’ll see what I mean; the U.S. Supreme Court has held that in certain circumstances the act of producing physical evidence to the government is itself “testimony” that is protected by the 5th Amendment privilege against self-incrimination; and since the fabricated Miranda rules are somehow based on the 5th Amendment privilege, I think the act-of-producing-evidence-as-testimony principle has to apply in a Miranda analysis as well as under a 5th Amendment analysis. If I’m right, then we pretty much have the same issues to resolve regardless of whether the Customs officer interrogates Doe in violation of Miranda or whether Doe is subpoenaed by a grand jury.

If, of course, Doe gives the Customs officer the encryption key after having been given the Miranda warnings and voluntarily waiving his rights to silence and to an attorney, then he’s probably out of luck.

Wow, thanks for the detailed post! I'm very glad I wandered back over here. You've cleared up a lot of my questions about the issue and your response to my original comment.