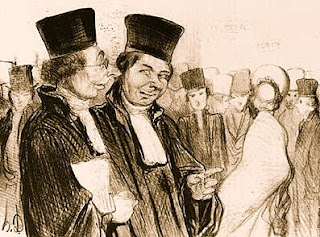 This post is arguably a little off topic. It does deal with conduct online.

But it isn’t about cybercrime, as such. It’s about what I think is a related issue: How much can you trust people you befriend in sites like MySpace and Facebook?

Unlike most of my posts, this one isn’t based on a criminal case. It’s based on an opinion issued by the Pennsylvania Bar Association Committee on Legal Ethics and Professional Responsibility: Pa. Ethics Opinion Number 2009-02 (March 2009).

As Wikipedia explains, legal ethics is based on a set of ethical principles that govern

the conduct of people engaged in the practice of law. In the United States, the American Bar Association has promulgated model rules . . . [that] address the client-lawyer relationship, duties of a lawyer as advocate in adversary proceedings, dealings with persons other than clients . . . and maintaining the integrity of the profession. Respect of client confidences, candor toward the tribunal, truthfulness in statements to others, and professional independence are some of the defining features of legal ethics.

The ethics opinion we’re going to focus on issued in response an inquiry a lawyer sent to the Pennsylvania Bar Association Committee on Legal Ethics and Professional Responsibility. The opinion explains what the inquiry was and how it came about:

The inquirer deposed an 18 year old woman (the `witness’). The witness is not a party to the litigation, nor is she represented. Her testimony is helpful to the party adverse to the inquirer's client.

The inquirer believes the pages maintained by the witness may contain information relevant to the matter in which the witness was deposed, and could be used to impeach the witness's testimony should she testify at trial. The inquirer did not ask the witness to reveal the contents of her pages, either by permitting access to them on line or otherwise. He has, however, either himself or through agents, visited Face Book and My Space and attempted to access both accounts. When that was done, it was found that access to the pages can be obtained only by the witness's permission. . . .

The inquirer asks the Committee's view as to whether the proposed course of conduct is permissible under the Rules of Professional Conduct, and whether he may use the information obtained from the pages if access is allowed.

Interesting question, isn’t it? It’s coming up in the context of evidence-gathering in civil litigation but as I’ll note later, I can see it also arising in criminal investigations.

The Bar Committee began by noting that the inquiry implicated several of the state’s Rules of Professional Conduct. The first one it considered is Rule 5.3, which says a lawyer is responsible for the conduct of a non-lawyer who is “employed or retained by or associated with” the lawyer if two circumstances exist: The first circumstance is that the conduct of the non-lawyer would constitute a violation of the Rules of Professional Conduct if the lawyer engaged in it; the other is that the lawyer “order[ed] or, with the knowledge of the specific conduct, ratifie[d] the conduct”. Pa. Ethics Opinion Number 2009-02, supra.

In deciding whether Rule 5.3 applied to the scenario at issue in the lawyer’s inquiry, the Bar Committee said the fact “that the actual interaction with the witness would be undertaken by a third party . . . does not insulate the inquirer from ethical responsibility for the conduct.” Pa. Ethics Opinion Number 2009-02, supra. While the Bar Committee found it could not say the lawyer would be “literally `ordering’” the conduct by the third person the lawyer “plainly” would be “procuring the conduct and, if it were undertaken, would be ratifying it with full knowledge of its propriety or lack thereof”. The Committee therefore found that the inquiring lawyer would be responsible for any ethical violations resulting from the third party’s contact with the witness.

The Bar Committee then considered whether the third party’s contact would violate the state Rules of Professional Conduct. It found, first, that the scenario the lawyer outlined would violate Rule 8.4, which makes it professional misconduct for a lawyer to “engage in conduct involving dishonesty, fraud, deceit or misrepresentation”. Pa. Ethics Opinion Number 2009-02, supra. The Committee found that the scheme the lawyer outlined violated the rule because the third party’s communication with the witness would be

deceptive. It omits a highly material fact, namely, that the third party who asks to be allowed access to the witness's pages is doing so only because he or she is intent on obtaining information and sharing it with a lawyer for use in a lawsuit to impeach the testimony of the witness. The omission would . . . conceal that fact . . . for the purpose of inducing the witness to allow access, when she may not do so if she knew . . . the true purpose . . . was to obtain information for the purpose of impeaching her testimony.

Pa. Ethics Opinion Number 2009-02, supra. The Bar Committee also found that even if

by allowing virtually all would-be `friends onto her FaceBook and MySpace pages, the witness is exposing herself to risks like that in this case, excusing the deceit on that basis would be improper. Deception is deception, regardless of the victim's wariness in her interactions on the internet and susceptibility to being deceived.

Finally, the Bar Committee found that the inquiring lawyer’s proposed tactic would also violate Rule 4.1(a). Rule 4.1(a) makes professional misconduct for a lawyer knowingly to “make a false statement of material fact to a third person”.

Perhaps because he was expecting bad news from the Committee, the lawyer also asked “if he obtained the information in the manner described, he could use it in the litigation.” Pa. Ethics Opinion Number 2009-02, supra. The Bar Committee found this issue was “beyond the scope of its charge” and so did not address it. The Committee noted that if the lawyer disregarded its opinion and used the tactic he inquired about to obtain the information, “whether or not the evidence would be usable either by him or by subsequent counsel in the case is a matter of substantive and evidentiary law to be addressed by the court” in the civil case. Pa. Ethics Opinion Number 2009-02, supra.

I find the lawyer’s last question a little depressing. It implies that he’s willing to risk committing professional misconduct to get evidence if he thinks he can use the evidence to discredit the witness who’ll testify against his client. If that inference is correct, his conduct also implies that he’s not as concerned about avoiding professional misconduct as he is about preserving the fruits of the misconduct (which kind of misses the point).

As I said earlier, I can see the tactic this lawyer inquired about being used in criminal investigations. I’ll address that issue in my next post.

Additional issue: the lawyer can seek out friends/acquaintances/classmates of the witness who may be Facebook friends and ask them supply information.