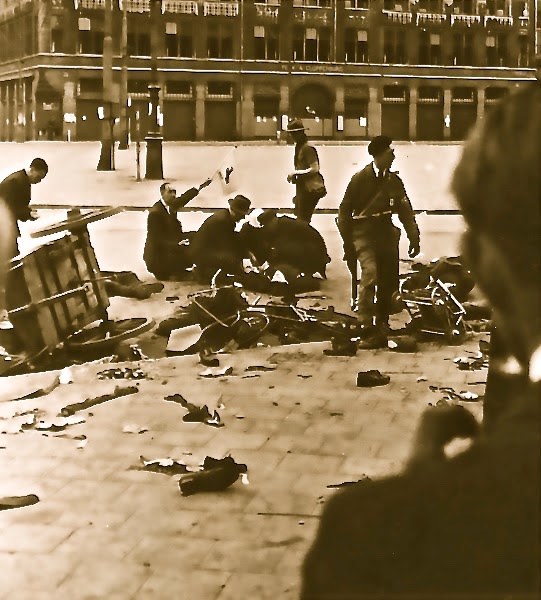 Keith Uriah Nelson was convicted of
first-degree disorderly conduct, Oregon Revised Statutes § 166.023(1), for (in the words of the charging instrument) `knowingly creat[ing] a risk of public inconvenience, annoyance and alarm by initiating and circulating a report concerning an impending catastrophe, * * * knowing the report to be false and stating that the catastrophe and emergency was located in and upon a school.’

The charge stemmed from messages [Nelson], a former student at Sam Barlow High School in Gresham, exchanged on MySpace, a social networking website, with another former Barlow student. A third student saw the messages and reported them to the police, who then reported them to the school.
State v. Nelson, 2014 WL 7181379 (Oregon Court of Appeals 2014).
As the story you can find here notes, Nelson was “sentenced to three years of probation.” You can read a little more about the case, and this court’s decision, in the other story you can find here.
At trial, Nelson’s lawyer
moved for a judgment of acquittal (MJOA) on the grounds that the state did not present evidence that [Nelson’s] conduct amounted to knowingly initiating and circulating a report of an impending catastrophe at a school, knowing that report to be false; and that, in any event, the charging instrument, on its face, criminalized speech that was protected by the guarantees of Article I, section 8, of the Oregon Constitution, as well as the 1st Amendment to the United States Constitution.
State v. Nelson, supra.
The first issue involved the interpretation of an Oregon statute; the second issue, of course, required the Court of Appeals to interpret, and apply, both Oregon and United States constitutional law.  On appeal, Nelson only pursued the second issue, i.e., he argued that the conviction violated his constitutional rights under either or both constitutions. State v. Nelson, supra.
The trial judge denied Nelson’s request for a judgment of acquittal, sent the case to the jury and, after the jury “returned a verdict of guilty, [Nelson] renewed his arguments in a motion in arrest of judgment (MAJ), which the court also denied.” State v. Nelson, supra.  In this opinion, the Court of Appeals is ruling on whether the judge erred in denying Nelson’s request for a motion in arrest of judgment.  State v. Nelson, supra.
The Court of Appeals explained that Nelson’s appeal only raised “a constitutional issue”, e.g., he did not challenge other rulings the judge made during, and before, trial.  State v. Nelson, supra.  It began its analysis of the facts and law by explaining that
[w]e review the denial of an MJOA to determine whether, after viewing the facts and the inferences that can reasonably be drawn from them in the light most favorable to the state, a rational trier of fact could have found the essential elements of the crime were proved beyond a reasonable doubt. State v. Cunningham, 320 Or 47, 880 P.2d 431 (Oregon Supreme Court 1994).
State v. Nelson, supra.
The court went on to explain that the
relevant facts under that standard are few and undisputed. [Nelson] and a friend, Varsamas, had accounts on MySpace. [Nelson’s] account was `private,’ meaning that only [his] specified `friends’ had access to it. Varsamas's account, and messages that appeared on it, were public.

The interchange that became the subject of this case began when Varsamas, using his MySpace alias (`The New Naruto’), posted on his MySpace page the following: `I live down the street from Barlow [High School]. I'm bored let's shoot it up. Who's with me on it? Oh and if you got plans let me hear them * * *. Mood: MASSACRE.’ Several people, including `Katy,’ `Derek,’ and [Nelson] (using his MySpace alias, `anatomy of sin’), responded.

`[Nelson]: im in, iv got some knives and I can get my dads 22 cal, we can start by killing [the campus security officer and an assistant principal].
`Varsamas: Fuck yeah bro. Should we kill of the teachers or the students first?
`[Nelson]: ummm lets go for the teachers sence there older wiser and stuff they wont freak out as bad as the kids would.
`Varsamas: We should try it all sneaky like. Like slit their throats and shit like that. Oh or even choke them and watch the live drift out of them.
`[Nelson]: but then we wont be abel to kill as many ppl it will take to long. If we go in all head strong blasting ppl in the face are score will be hire then we kill are selfs so the family will never get justice/peace
`Katy: Probably shouldn't be saying that, someone could take you seriously. Lol. Also, teach your friend to spell. He or she needs anatomy of spelling. Ha!
`Varsamas: Hmm, you got a point, then we will need more guns. We should probably kill the cop asap. dont want anyone shootin us too.
`Derek: can you give me a reason for the killing time?
`Varsamas: to cleanse the gene pool of idiocy
`Katy: [Addresses [Nelson] as `Anatomy of a spelling lesson’ and corrects several spelling errors.]
`[Nelson]: imao that cop was a prick anyway XD id love to kill him, one of my co-workers today said we should hold ppl at gun point and rape them * * * any way so what's the date and time for us to do this?’
State v. Nelson, supra.
The Court of Appeals went on to explain that this
is the entire conversation contained in the record. Sometime afterward, Katy reported the conversation to the police, who, in turn, reported it to the school. [Nelson] was subsequently interviewed by police, arrested, and tried for disorderly conduct. As noted above, he raised both a constitutional issue (prosecuting him under the charging instrument violated his state and federal free expression rights) and a statutory issue (his undisputed speech activities did not amount to knowingly creating a risk of public inconvenience, annoyance, and alarm by initiating and circulating a report of an impending catastrophe in a school).

The court rejected both arguments. In rejecting the statutory argument, the court stated, `making postings on a MySpace page that is later reported to the police by a person who is -- has access to those MySpace comments, in my mind, could, at least arguably, constitute initiation or circulation of a report.’ The trial court, in other words, ruled that the report that created the specified risk was Katy's report to the police, and that [Nelson’s] postings `initiated’ that report.
State v. Nelson, supra.
The Court of Appeals began its ruling on Nelson’s arguments by noting that
[w]ith respect, and recognizing that the trial court, unlike this court, did not enjoy the luxury of extended deliberation and discussion, we reach a different conclusion for two reasons. First, to find [Nelson] guilty, the court would have to have found that [he] knowingly initiated and circulated the report. There is no evidence that he did either. If anybody initiated the chain of events that resulted in Katy's report, it was Varsamas. His post, not [Nelson’s], started the online conversation. Nor did [Nelson] circulate the report; the allegedly culpable conduct occurred entirely before the report was made.

Second, one element of the crime as charged is the culpable mental state of `knowingly.’ To obtain a conviction, the state had to prove that, when [Nelson] made the relevant statements, he knew that he was `creat[ing] a risk of public inconvenience, annoyance and alarm.’ Again, there is no evidence to support that inference. In fact, the evidence points to the opposite conclusion. [Nelson] and Katy were not acquainted with each other. Her participation in the conversation consisted of mocking [his] spelling and cautioning him and Varsamas that somebody could take them seriously -- an observation accompanied by a clear indication that she did not: `Probably shouldn't be saying that, someone could take you seriously. Lol.’

Although a reasonable juror could conclude beyond a reasonable doubt that Katy's report would cause the risk of public inconvenience, annoyance and alarm, no reasonable juror could find, on the evidence in the record and inferences drawn from it, that [Nelson] knew that Katy would make that report.
State v. Nelson, supra (emphasis in the original).
The court went on to explain that
[i]t is also possible that the `report’ in question was not Katy's call to the police, but the conversation between the MySpace participants themselves. Where, as here, there is no indication that the word is used in a technical legal sense, the term is not defined by statute, and there is no helpful legislative history, we look to the word's plain, ordinary meaning. See State v. Briney, 345 Or 505, 200 P 3d 550 (Oregon Supreme Court 2008) (court gives words of common usage their plain, ordinary meaning).

Webster's Third New Int'l Dictionary 1925 (unabridged ed. 2002) defines a `report’ as, among other things: `common talk or an account spread by common talk: a story or statement casually repeated and generally believed: rumor.’ It is therefore plausible that the state's theory was that [Nelson’s] contributions to the MySpace conversation initiated and circulated the rumor that there was an impending catastrophe at the school.


State v. Nelson, supra (emphasis in the original).
Posted by Susan Brenner at 8:47 AM