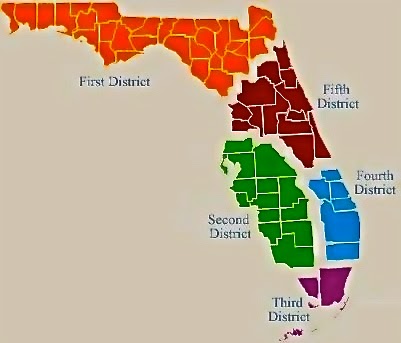 As Wikipedia explains, territorial jurisdiction
in United States law refers to a court's power over events and persons within the bounds of a particular geographic territory. If a court does not have territorial jurisdiction over the events or persons within it, then the court cannot bind the defendant to an obligation or adjudicate any rights involving them.
Territorial jurisdiction was at issue in Knight v. State, 2014 WL 7243139 (Florida Court of Appeals for the First District 2014). John Gordon Knight “entered a negotiated plea of no contest to two counts of possession of child pornography while reserving the right to appeal” the trial judge’s denial of his motion to suppress certain evidence.  Knight v. State, supra.
As the Court of Appeals notes,
[p]ursuant to the plea agreement, [Knight] was adjudicated guilty and sentenced to three years in prison followed by two years of sex offender probation.
Knight v. State, supra.
Before we get into whether the trial judge erred in denying Knight’s motion to suppress, we need to know how the prosecution arose:
At the suppression hearing, Detective Camille Burban of the Neptune Beach Police Department testified that she had prior experience investigating sex crimes and child pornography as a member of the Internet Crimes Against Children (ICAC) Task Force for Northeast Florida. In 2009, she used a program called the Wyoming Tool Kit to search for people who were sharing known child pornography on peer-to-peer networks. . . .

Known child pornography consisted of files identified by the National Center for Missing and Exploited Children or the Wyoming ICAC Task Force as depicting real child victims. Just as every person had a fingerprint, every picture of known child pornography had an SHA value, which was recognized by the software Burban had running in her office.

When the program identified a peer-to-peer network trading an SHA value linked to known child pornography, it logged the IP address (the number identifying the location where the computer was hooked up to the Internet), the name of the file containing the known child pornography, and the date the file in question was shared. In this case, the program logged an IP address that was from Comcast with the latest sharing occurring on August 6, 2009. Burban subpoenaed Comcast and determined that the IP address was registered to a residence in Atlantic Beach.
Knight v. State, supra.
The court goes on to explain that Burban
then called Detective Chris Pegram of the Atlantic Beach Police Department and told him that she obtained a hit on her computer for a residence in Pegram's jurisdiction. When she asked if he wanted to give it to the ICAC Task Force for Northeast Florida or handle it himself, Pegram responded that he wanted the case, but asked for her assistance because the Atlantic Beach Police Department did not have the necessary training or experience.

At that time, there was a mutual aid agreement between both police departments. She and Detective Pegram began researching who lived at the address in question and applied for a search warrant.

Burban believed there was probable cause to search the address because of the SHA value, which was similar to a digital fingerprint for the photograph. She downloaded the photograph to make sure it was child pornography and had not been deleted. She typed up the search warrant and presented it to the magistrate, who signed and issued it.

She, Detective Pegram, and other officers executed the search warrant on September 9, 2009. [Knight] and his seventeen-year-old stepson were present at the time. She explained to [Knight] that she was there to investigate a computer crime and needed to talk to each person in the house. [He] was absolutely cooperative.

She learned there were two computers in the house, a laptop for the family and a desktop computer in the bedroom. [Knight] confessed that he had downloaded child pornography onto the desktop computer in the bedroom. She took the desktop computer and left a copy of the warrant with [him].
Knight v. State, supra.
As noted above, Knight appealed the trial judge’s denying his motion to suppress “all evidence seized as a result of the extra-jurisdictional investigation and search of [Knight’s] home computer located in Atlantic Beach by Detective Camille Burban of the Neptune Beach Police Department.”  Knight v. State, supra.  In other words, Knight argued that Burban did not have authority to investigate him and search his home and computer because she was outside the territory in which she had jurisdiction to conduct such investigations.  Knight v. State, supra.
The Court of Appeals began its analysis of Knight’s argument by explaining that
[g]enerally, municipal law enforcement officers can exercise their law enforcement powers only within the territorial limits of the municipality. Nunn v. State,121 So.3d 566 (Florida Court of Appeals 2013); State v. Griffis, 502 So.2d 1356 (Florida Court of Appeals 1987). One exception allows an officer to act outside of his or her jurisdiction if the subject matter of the investigation originates inside city limits. Nunn v. State, supra. . . .

Thus, the investigatory acts of an officer outside of his or her jurisdiction are not deemed unlawful if during the investigation the officer has a good faith belief that the crime occurred within his or her jurisdiction. Nunn v. State, supra. Another exception applies if the officer acts in accordance with a voluntary cooperation agreement pursuant to § 23.121, Florida Statutes, or an interlocal agreement to provide law enforcement services pursuant to § 166.0495, Florida Statutes. Jarrett v. State, 926 So.2d 429 (Florida Court of Appeals 2006). . . . When an officer unlawfully asserts official authority, either expressly or implicitly, to gain access to evidence, that evidence must be suppressed. State v. Phoenix, 428 So.2d 262 (Florida Court of Appeals 1982), approved, 455 So.2d 1024 (Florida Supreme Court 1984).
Knight v. State, supra.
In his appeal, Knight argued that
the trial court erred in denying his motion to suppress evidence obtained in Atlantic Beach as a result of the extra-jurisdictional investigation by Detective Burban of the Neptune Beach Police Department. Specifically, [he] claims Burban acted outside her territorial jurisdiction when she utilized a computer program available only to law enforcement to investigate the contents of [his] computer that was located outside the city limits of Neptune Beach.

However, the state correctly responds that Burban's investigation involved computer files [Knight] placed in folders that were shared over a peer-to-peer network. Because the child pornography present on [his] computer could be accessed over the Internet by way of [Knight’s] file-sharing program, [he] cannot argue that this portion of Burban's investigation was outside her territorial jurisdiction. In fact, Burban did not know whether the source of the child pornography being shared over the Internet was located inside or outside her territorial jurisdiction.
Knight v. State, supra.
The Court of Appeals did not buy Knight’s argument:
[O]nce Burban subpoenaed the Internet provider and determined the IP address was registered to a residence in Atlantic Beach, it became clear any further investigation was outside Burban's territorial jurisdiction unless one of the aforementioned exceptions applied. Burban recognized this when she contacted Detective Pegram of the Atlantic Beach Police Department, who asked for her assistance because the Atlantic Beach Police Department did not have the necessary training or experience.

At that time, there was a mutual aid agreement between both police departments. She and Detective Pegram then obtained a search warrant, which they and other officers executed on [Knight’s] residence. Although [he] claims the mutual aid agreement did not allow Burban to continue her investigation outside the limits of Neptune Beach where the subject matter of the investigation did not originate inside the city limits of Neptune Beach, [Knight’s] position rests on the questionable notion that his possession of child pornography was confined to the city limits of Atlantic Beach.

Because [he] placed the child pornography in a shared computer file that could be accessed over the Internet in neighboring Neptune Beach, Detective Pegram's investigation originated inside the city of limits of Neptune Beach, and the mutual aid agreement between the Neptune Beach and Atlantic Beach Police Departments allowed her to continue that investigation under the auspices of the Atlantic Beach Police Department. Accordingly, the trial court properly denied [Knight’s] motion to suppress.
Knight v. State, supra.  The Court of Appeals therefore affirmed Knight’s conviction and sentence.  Knight v. State, supra.

Posted by Susan Brenner at 9:40 AM