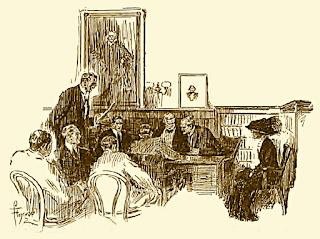 In Ohio, as in many, if not all, states, the state Supreme Court is in charge of disciplining attorneys who violate the state’s rules of professional conduct.  If you are interested, you can read about the organizations and procedures Ohio uses for this purpose here. And you can find a flow chart that explains how the system works here.

Getting back to Detweiler, on July 26, 2011 the Court’s Office of Disciplinary Counsel charged him “with engaging in conduct that adversely reflects on his fitness to practice law by soliciting a client for sexual favors and continuing to represent the client despite the substantial risk that his own personal interests conflicted with those of the client.” Disciplinary Counsel v. Detweiler, supra.

The “parties submitted a consent-to-discipline agreement, in which they stipulated that Detweiler had committed the charged misconduct and that a six-month, fully stayed suspension was the appropriate sanction for that misconduct.”  Disciplinary Counsel v. Detweiler, supra.   A “panel of the Board of Commissioners on Grievances and Discipline recommended that the agreement be adopted,” but the full Board “rejected it and remanded the matter for further proceedings.” Disciplinary Counsel v. Detweiler, supra.

On remand, the panel reheard the matter and again recommended Detweiler “receive a six-month, fully stayed suspension for his misconduct.” Disciplinary Counsel v. Detweiler, supra.  But after “noting the nonconsensual and unwelcome nature of Detweiler's advances,” it also recommended “he be suspended for one year, all stayed on the conditions that he commit no further misconduct, submit to an evaluation by the Ohio Lawyers Assistance Program” and “comply with any treatment recommendations.” Disciplinary Counsel v. Detweiler, supra.

When the Board reviewed this, it accepted the panel’s “findings of fact and conclusions of law” but because it found “the client felt trapped because she could not afford to discharge Detweiler and retain new counsel,” the Board “recommended he be suspended for one year with six months stayed on the conditions recommended by the panel.”  Disciplinary Counsel v. Detweiler, supra.

Detweiler appealed the Board’s “increased sanction” to the Ohio Supreme Court, asking it “to adopt the one-year, fully stayed suspension recommended by the panel.”  Disciplinary Counsel v. Detweiler, supra.  And that brings us to what he allegedly did.

a former client paid Detweiler a $3,500 retainer to handle her divorce. After filing the divorce complaint, Detweiler began to send the client text messages of a personal nature. His initial texts appeared to be harmless inquiries about the client's well-being and Cleveland Browns football. They later included social invitations, which progressed into comments of a sexual nature.

Detweiler texted the client about her clothing and how it made him feel sexually, and indicated that he wanted to have sex with her. He continued `sexting’ the client and admits that sometime between November 2007 and January 2008 he sent her a nude picture of his lower body in a state of sexual arousal.

The client did not initially make her discomfort known to Detweiler, but following an early 2008 text message in which he asked her to have oral sex with him, she sent him a text message rejecting his solicitation.

In the grievance the client subsequently filed, she stated that when Detweiler

sent her his nude photograph, she had already spent $10,000 in fees and expenses and could not afford to retain new counsel. Therefore, she continued his representation and tried to avoid his sexual advances until September 2008, when she voluntarily dismissed her complaint for divorce after temporarily reconciling with her husband. At no time did the client have sex with Detweiler or even meet with him socially.

Disciplinary Counsel v. Detweiler, supra.  (You can find the rules cited above here.)

The Supreme Court adopted “these findings of fact and misconduct.”  Disciplinary Counsel v. Detweiler, supra. That meant the only issue it needed to address was the sanction imposed on Detweiler.

BCGD refers to the Ohio Board of Commissioners on Grievances and Discipline’s Rules and Regulations, § 10 of which you can find here.  It sets out “guidelines for imposing lawyer sanctions.”  More specifically, it sets out these particular aggravating factors:

BCGD § 10. The factors above do “not control the Board's discretion, but may be considered in favor of recommending a more severe sanction”. BCGD § 10.

In reviewing Detweiler’s appeal, the Supreme Court noted that the parties had stipulated

that the client harmed by Detweiler's misconduct was vulnerable. See BCGD Proc. Reg. 10(B)(1)(h). The board found not only that the conduct caused harm to a vulnerable client, but that Detweiler had acted with a selfish motive and had also engaged in a pattern of misconduct including the conduct at issue in this case and in his previously sanctioned, though subsequent, conduct. See BCGD Proc.Reg. 10(B)(1)(b), (c), and (h).

The only mitigating factor stipulated by the parties and found by the board is Detweiler's cooperative attitude toward the disciplinary proceedings. See BCGD Proc.Reg. 10(B)(2)(d). But the board also noted Detweiler's expressed remorse and his acknowledgment of the severity of his misconduct.

The court noted that while Detweiler testified (presumably at one or more hearings) that “he had obtained marital counseling, he has not obtained any individual counseling to address the issues underlying his inappropriate conduct toward his female clients.”  Disciplinary Counsel v. Detweiler, supra.  It also noted that Detweiler challenged the

[v]alidity of its finding that the affected client was financially vulnerable and felt compelled to continue his representation despite his sexual overtures. . . . [H]e asserts the client was not financially tied to him, because the domestic relations court ordered her husband to pay the full amount of her fees and costs during the pendency of the divorce.

[n]othing in the record supports this assertion. And regardless of who would ultimately bear the responsibility for paying the client's legal fees, the client `felt completely trapped’ and unable to afford to hire a new attorney, having already expended more than $10,000 for Detweiler's representation.

It also noted that it has

publicly reprimanded attorneys, including Detweiler, for developing sexual relationships with clients when the affairs are legal and consensual and have not compromised the client's interests. . . . We have imposed a greater sanction for such conduct when the attorney had a prior disciplinary record at the time of his offense. . . .

In more extreme cases, we have indefinitely suspended or permanently disbarred attorneys who have made unwelcome sexual advances toward their clients that included unwelcome physical contact. See, e.g., . . . Disciplinary Counsel v. Sturgeon, 111 Ohio St.3d 285, 855 N.E.2d 1221 (Ohio Supreme Court 2006) (permanently disbarring an attorney who solicited and received oral sex from one client, touched another client in an unwanted sexual manner and solicited sex in exchange for a reduced legal fee, and exposed himself after soliciting oral sex from a third client).

The Supreme Court then noted that

[t]hose cases may not present conduct identical to that of Detweiler, but they do provide a framework from which we can evaluate the severity of his conduct. While Detweiler's conduct may not be as egregious as that of . . . Sturgeon, it is more disturbing than that of other attorneys who have engaged in consensual sexual affairs with clients or made inappropriate sexual comments to their clients.

Not only did Detweiler make repeated unsolicited and unwelcome sexual advances on a vulnerable client, but when she ignored those advances, he upped the ante by sending her a nude photograph of himself in a state of sexual arousal. Based on this disturbing escalation of the improper and offensive conduct Detweiler directed toward his client, we are not convinced that a fully stayed suspension will adequately protect the public from future harm.

Therefore, we find that a one-year actual suspension from the practice of law is the appropriate sanction for Detweiler's misconduct.

William Jeffrey Detweiler is suspended from the practice of law in Ohio for one year and his reinstatement shall be conditioned on the submission of proof that he has submitted to an OLAP evaluation and complied with any treatment recommendations. Costs are taxed to Detweiler.

If you would like to see a short video clip of arguments before the Supreme Court in this case, check out this link.
Posted by Susan Brenner at 7:42 AM