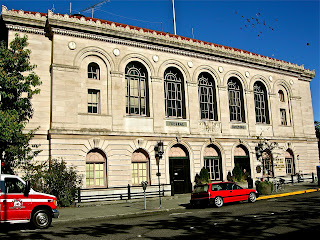 According to this and other news stories, in mid-April of 2010 Douglas Spink was arrested “for running what authorities say appears to be a bestiality farm in Washington state in which visitors could engage in all sorts of twisted sex acts with animals.” And according to this news story, Spink was not charged with violating

Washington's animal cruelty law. Instead, because of a past conviction for trafficking millions of dollars in cocaine, a federal judge found him guilty of probation violations for associating with criminals, telling lies in monthly reports and travelling without permission.

A little over two years later, again according to that same story, Spink was

shocked to find a warrant for his arrest was issued last month, days before his release from federal prison. He was transferred to Whatcom County Jail and charged with three counts of animal cruelty. He has since posted $5,000 bond.  Deputy Prosecutor Eric Richey said that with the new charge, he's seeking to ban Spink for life from owning animals.

That brings us to the opinion this post examines:  On August 24, 2010, Spink filed a motion for the return of property which, I gather, was seized when law enforcement officers raided his farm.  U.S. v. Spink, 2013 WL 1909523 (U.S.Court of Appeals for the 9th Circuit 2013).  As I have noted in other posts, when someone files a motion for return of property, under Rule 41(g) of the Federal Rules of Criminal Procedure, he/she is not trying to have the property suppressed so it cannot be used as evidence in a criminal prosecution.  Instead, the person is claiming the property was unlawfully seized and/or that the government no longer has a need to retain it, in which case it should be returned to the rightful owner.

(As this news story notes, Stephen Clarke, “a British man,” was arrested with Spink (for having sex with dogs, convicted of animal cruelty, sentenced to 30-days in jail and then deported.  According to Spink’s reply brief on appeal, Clark’s “video camera and laptop was [sic] seized” during the raid on Spink’s farm. Appellant’s Reply Brief, U.S. v. Spink, 2012 WL 3342718. Law enforcement officers were “able to get into the laptop” and retrieve 70,000 images,” as noted later in this post.  Appellant’s Reply Brief, supra.)

On December 1, 2011, the [judge] . . . directed [Spink] provide the court authority to support his position that his computers be returned to him. The court also stated that he would order the United States Probation Office to clean the hard drive before returning computer to [Spink].

`completely and thoroughly wipe the computers and equipment in order to be raised any hidden, encrypted and contraband content. . . .  And then return the computers to Mr. Spink or his designee for safe keeping’. . . .

Subsequently, on March 12, 2012 [Spink] filed a motion to stay the order directing US probation to wipe the computers. This motion was granted. Spink appeals the trial court's order to deny the return of his property until the information contained therein is `wiped’ clean.

In reviewing Spink’s argument, the Court of Appeals noted that once property that has been seized by law enforcement

U.S. v. Spink, supra. According to Spink’s initial brief on appeal, when it was filed in May of 2012, he was “serving time at FCI Beaumont Low Beaumont Texas” and was “expected to be released on November 23, 2012.”  Appellant’s Opening Brief, supra. I assume his lawyer and federal authorities expected him then to be put on probation.
Getting back to the Court of Appeals, it then noted that in this case

there appears to be no question that Spink is entitled to the return of the two computers. The only issue is whether the district court could direct that the computer hard drives be erased before the computers were returned to Spink.

The record reflects that the government had a legitimate reason for seeking an order allowing the erasure of the computers' hard drives. There was substantial evidence that Spink was a skilled computer technician, who had used his computer skills to violate the conditions of his supervised release.

Among the provisions of Spink's supervised release, which are not at issue in this appeal, are the following:

The defendant shall not possess or peruse any authentic, altered, or manufactured, in whatever form, material that depicts and/or describes `bestiality’, zoophilia or any sexual conduct involving animals except as approved in advance by his probation officer.

The defendant shall allow a probation officer to inspect any personal computer owned and operated by the defendant.

The defendant shall shut down all websites owned, operated, or under his control that promote or contain zoophilia, bestiality or any sexual act with animal[s] to include, but not limited to [52 specifically listed websites].

As to why the government thought there might be material involving bestiality on the computers, the court’s opinion notes that in sentencing Spink, the district court judge relied, at least in part,

on evidence linking Spink to the animal websites and to the screen name `Fausty’ that was used in the online postings, including photos of Spink and his animals on the websites, items labeled `Fausty’ found in Spink's home, and a sworn affidavit from one of Spink's associates.

Spink’s initial brief on appeal notes that the Probation Office also claimed it should be allowed to wipe the computers’ hard drives “because the one, “unencrypted” hard drive in the “laptop” computer that was also apparently seized from him contained 70,000 offensive images.” Appellant’s Opening Brief, supra. And it said Spink “anticipate[d] that the government” would argue that the “Probation office had determined that Spink's computer hard drive was encrypted.”  Appellant’s Opening Brief, supra (emphasis in the original).

The brief also noted that in opposing Spink’s motion for return of property, the prosecution claimed that U.S. Probation

officers seized various records and items, including video cameras and several tapes that contained footage of illicit acts involving animals on Spink's property. Further, the government argued that the officers also seized computers and electronic storage devices. As they later learned, the computers were heavily encrypted, and Spink had wiped the hard drives and the devices clean. (EMPHASIS ADDED)

And it argued that the prosecution

has absolutely no proof that the information on Spink's property is contraband apparently because the government has not chosen to expend the resources to ascertain what is on [his] desktop computers. Nor has the government provided evidence that U.S. Probation requested Spink to provide them access into his computer.

Since the government cannot prove that contraband exist [sic] on Spink's computers they are requesting this court to sanction the unadulterated speculation that there must be bestiality related material on [them]. The government has failed to cite authority for this novel approach to justify destroying the property of a United States citizen.

The guilt by association argument of the government can be described as: `We can't prove Spink had Bestiality material on his desktop computers, but Clarke had this offensive material on his laptop, therefore, Spink does.’

Unfortunately, I do not have access to the prosecution’s brief on appeal. But either it was persuasive or the Court of Appeals simply did not find Spink’s arguments persuasive because it affirmed the district court judge’s order denying the motion for return of property. U.S. v. Spink, supra.

In so doing, the court explained that the

If the hard drives have been erased, there is no harm to Spink from the government wiping the hard drives again before it returns the computers. However, if there is encrypted data, Spink presumably has the ability to access those materials, and he has not offered to access the files in the presence of the Probation Office.

Moreover, if the hard drives contain encrypted materials, those materials are likely to be the type of materials that Spink is prohibited from possessing under the conditions of his supervised release.