Emails as Property of Decedent’s Estate . . . 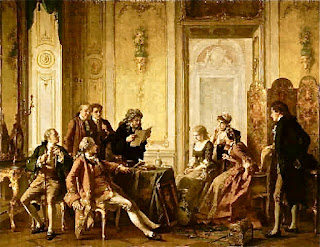 After their brother John died, the co-administrators of his estate – his sister Marianne Ajemian and his brother Robert Ajemian – brought a “declaratory judgment action in the Probate and Family Court, seeking a declaration that electronic mail messages (e-mails) John sent and received using a Yahoo!, Inc. e-mail account are property of his estate.”  Ajemian v. YahooA, Inc., __ N.E.2d __, 2013 WL 1866907 (Appeals Court of Massachusetts 2013).

As Wikipedia explains, a declaratory judgment is the “legal determination of a court as to the legal position of litigants in cases where there is doubt as to their position in law”.  Here, the probate judge dismissed the siblings’ declaratory judgment action because he found that "a forum selection clause required that suite be brought in California," rather than in Massachusetts. Ajemian v. YahooA, Inc., supra.

As to what this suit is actually about, one of the briefs filed in this appeal notes that John Ajemian “was struck and killed by a motor vehicle” on August 10, 2006.  Brief for the Plaintiffs-Appellants, Ajemian v. YahooA, Inc., 2012 WL 1078599. After John died, his sister and brother were appointed “Administrators of their late brother’s estate.”  Brief for the Plaintiffs-Appellants, supra.  As Wikipedia notes, the administrator is “a person appointed by a court to administer the estate of a deceased person who left no will.”

That brings us to the email account, which Robert opened for John “[a]round August or September” of 2002. Ajemian v. YahooA, Inc., supra. While Robert opened the account

As to the TOS in effect when the account was created,

[a]ccording to Yahoo!, `[p]rospective users are given an opportunity to review the Terms of Service and Privacy Policy [TOS] prior to submitting their registration data to Yahoo!.’ Robert . . . has no affirmative memory of accepting the TOS or seeing or reading it when he opened the account. The printed version of the TOS in effect . . . when [he] opened the account . . . is ten single-spaced pages and consists of twenty-five numbered sections. . . . [T]he following sections are . . . pertinent to this appeal.

`1. ACCEPTANCE OF TERMS[.] “Welcome to Yahoo!. Yahoo provides its service to you, subject to the following Terms of Service (‘TOS'), which may be updated by us from time to time without notice to you. . . .”’

`6. MEMBER CONDUCT[.] . . . You acknowledge and agree that Yahoo may preserve Content and may also disclose Content if required to do so by law or in the good faith belief that such preservation or disclosure is reasonably necessary to: (a) comply with legal process; [or] (b) enforce the TOS. . . .’

`13. TERMINATION[.] You agree that Yahoo, in its sole discretion, may terminate your password, account (or any part thereof) or use of the Service, and remove and discard any Content within the Service, for any reason. . . .’

`16. YAHOO'S PROPRIETARY RIGHTS[.] . . . Yahoo grants you a personal, non-transferable and non-exclusive right and license to use the object code of its Software on a single computer. . . .’

`24. GENERAL INFORMATION[.] . . . The TOS and the relationship between you and Yahoo shall be governed by the laws of the State of California. . . . You and Yahoo agree to submit to the personal and exclusive jurisdiction of the courts located within the county of Santa Clara, California. . . .

A version of the TOS was in effect when John died. Ajemian v. YahooA, Inc., supra. Most of the provisions were the same as the ones quoted above, but the new TOS added two new sections:

`22. NO THIRD–PARTY BENEFICIARIES. You agree that, except as otherwise expressly provided in this TOS, there shall be no third-party beneficiaries to this agreement.’ . . .

`26. GENERAL INFORMATION[.] . . . . You agree that your Yahoo! account is non-transferable and any rights to your Yahoo! ID or contents within your account terminate upon your death. Upon receipt of a copy of a death certificate, your account may be terminated and all contents therein permanently deleted.’

“Beginning shortly after John's death,” his brother and sister

repeatedly tried to gain access to the e-mail account. Initially, they sought access in order to obtain the e-mail addresses of John's friends to notify them of his death and memorial service. Subsequently, the [sister and brother] (by then . . . co-administrators of John's estate) sought the e-mails to help identify and locate assets and administer John's estate.

Yahoo! “initially agreed to turn over the information provided the family produced a copy of John's birth and death certificates and other documentation,” but “later refused them access to the account or its contents, relying on the Stored Communications Act,” 18 U.S. Code §§ 2701 et seq. (2006), “which Yahoo! interpreted to preclude disclosing John's e-mails even to the administrators of his estate.”  Ajemian v. YahooA, Inc., supra.

John’s siblings continued their efforts to persuade Yahoo! to give them access to the contents of the email account, but that went nowhere, so they filed this action.  Ajemian v. YahooA, Inc., supra.  In this suit, they seek “access to the contents of the e-mail account on” either or both of two theories: “(1) that the e-mails are property of John's estate and, therefore, Marianne and Robert (as the estate's administrators) are entitled to access to them; and (2) that as co-owner of the account, Robert individually is entitled to its contents.” Ajemian v. YahooA, Inc., supra.

As noted above, a probate court judge dismissed the suit after Yahoo! filed a motion to dismiss in which it argued that the action could not proceed in Massachusetts, given the forum selection clause in Yahoo!’s TOS (in Paragraph 24 of the TOS, quoted above).  Ajemian v. YahooA, Inc., supra.  So, if that decision were to survive this appeal, it would mean that John’s sister and brother would have to sue in California, in an effort to obtain access to the email account.  That could cost more, since they would have to hire a California lawyer and might have to travel there to testify or otherwise pursue the suit.

As Wikipedia notes, a forum selection clause “in a contract with a conflict of laws element allows the parties to agree that any litigation resulting from that contract will be initiated in a specific forum.”  In addressing the sister and brother’s arguments as to why this clause should not trump their right to sue in Massachusetts, the appellate court noted that Massachusetts courts have not had considered the enforceability of

forum selection and limitations clauses in online agreements. We have, however, considered the enforceability of such provisions in traditional paper contracts. In those cases, following the rule of reasonableness articulated in Bremen v. Zapata Off–Shore Co., 407 U.S. 1 (1972) we have held that such clauses will be enforced provided they have been reasonably communicated and accepted and if, considering all the circumstances, it is reasonable to enforce the provision at issue. . . .

The court found the forum selection clause was not “reasonably communicated” to John and Robert because Yahoo! simply said “`[p]rospective users are given an opportunity to review the Terms of Service and Privacy Policy prior to submitting their registration data to Yahoo!’”.  Ajemian v. YahooA, Inc., supra.  The court noted that nothing indicated the TOS were, for example, “displayed on the user’s computer screen” or otherwise brought to a user’s attention.  Ajemian v. YahooA, Inc., supra.

It then took up the remaining question: whether enforcing the forum selection clause would be reasonable under the circumstances.  Ajemian v. YahooA, Inc., supra.  It began its analysis of this issue by noting that, even if the provisions of the 2002 and later TOS had been reasonably communicated to, and accepted by, John and/or Robert, “we could not fairly conclude that it was reasonable to enforce the forum selection and limitations clauses against the administrators of John's estate.”   Ajemian v. YahooA, Inc., supra.  It reached that conclusion after analyzing four distinct factors.

The third was that Yahoo! claimed no “ownership interest in the contents of the account”, so its interest in the suit was “slight.”  Ajemian v. YahooA, Inc., supra.  And last, the court found that the forum selection clause was “unreasonable” in its “breadth” because it was not limited to suits that involved the contract between Yahoo! and John and Robert, which is usual with contractual forum selection clauses.  Ajemian v. YahooA, Inc., supra.

And that finally brought the court to the real substantive issue:  whether the contents of the email account are property of John’s estate.  Ajemian v. YahooA, Inc., supra.

I don’t know about other states, but if this action had been brought in Oklahoma, the answer to the email-as-property question might have been resolved much more easily.  As this blog post notes, in 2010 Oklahoma adopted a statute, “the first of its kind in the United States,” which assumes that an online social media account is “the property of its creator.”  More precisely, 58 Oklahoma Statutes § 269 states that

[t]he executor or administrator of an estate shall have the power, where otherwise authorized, to take control of, conduct, continue, or terminate any accounts of a deceased person on any social networking website, any microblogging or short message service website or any e-mail service websites.

Another blog post notes, though, that the Oklahoma statute might not resolve the issue in this case.  And since no cases seem to have been decided under the still relatively new statute, I suspect this is still an open issue.
Posted by Susan Brenner at 8:05 AM