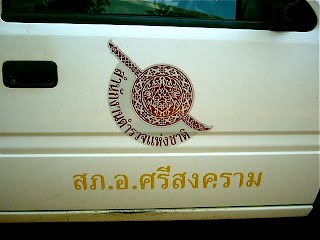 This post is about a case in which a U.S. citizen claimed that a search conducted in Thailand primarily by Thai police violated his rights under the 4th Amendment.

The opinion we’re concerned with contains the federal district court judge’s ruling on Stokes’ motion to suppress “several items, including depictions of child pornography,” which the Thai police found when they searched his home in Thailand. U.S. v. Stokes, supra.

The events that led up to the search began when U.S. Immigration and Customs Enforcement (ICE) agents heard Stokes (i) had been fired from his job teaching English at a Thai school for allegedly “engag[ing] in inappropriate contact with young students,” (ii) had a “criminal history involving crimes against children in the United States” and (iii) had told teachers he once worked with that he had “`a boy or two’ living with him”. U.S. v. Stokes, supra. Based on that, ICE Agent Phillips contacted the Royal Thai Police, who told him they were already investigating Stokes because the manager of a building where he once lived told an officer he saw “two young boys visiting Stokes’ quarters.” U.S. v. Stokes, supra.

ICE agents “initiated surveillance of Stokes’ home in Pattaya in September 2003”, but soon found it necessary to ask the Royal Thai Police to help with the surveillance. U.S. v. Stokes, supra. ICE Investigator Paisarn asked Thai Police Colonel Thongsuk for assistance, and while the opinion doesn’t explicitly say that the Thai police helped with the surveillance, I get the sense they did, at least to some extent. U.S. v. Stokes, supra. And that brings us to the search warrant and the search:

On . . . October 9, 2003, Thai officers, commanded by Colonel Thongsuk, executed the warrant with assistance from Paisarn, Phillips, and other ICE investigators. The ICE agents and Thai police officers met outside Stokes's home at 6:10 a.m. Stokes was not home . . . so the officers waited for his return before attempting to enter. . . .

[W]hen Stokes arrived . . . Colonel Thongsuk . . . informed Stokes that Thai police had a warrant and intended to search the house. When it was clear Stokes could not understand what Thongsuk was saying, Thongsuk called Paisarn over to translate. Paisarn read the warrant . . . to Stokes in English. This was the first time Paisarn read the warrant. Phillips . . . did not read the warrant. According to the certified English translation, the warrant empowered the Thai police to . . . search Stokes's residence `. . . ` to locate and seize any illegal items and narcotics . . . of which possession is considered illegal . . . or which has been used or is intended to be used to commit a crime.’ . . .

Thai officers heard noises coming from an upstairs room. Stokes led Paisarn and Thai officers to the upstairs master bedroom where . . . the noise emanated from a television set. Paisarn searched the closet of the master bedroom, where he found a camera. . . . Paisarn turned on the camera and discovered that the camera contained photographs of children committing sexual acts. Paisarn called Colonel Thongsuk . . . and showed Thongsuk the camera and photographs. Thongsuk questioned Stokes as to the identity and location of the children in the photographs and told Paisarn to examine the full contents of the camera for `anything else that is illegal in the Thai law.’ . . .

Colonel Thongsuk discovered a safe in the master bedroom. . . . Stokes opened the safe, and Thai officers recovered a compact disc inside. In response to questioning from Paisarn, Stokes admitted the disc contained pornographic images of children and Stokes had made some of the images on the disc. Thai police also seized Stokes' computer after Phillips unplugged and disconnected the computer in a way that prevented the destruction of forensic evidence contained on the hard drive.

She found the 4th Amendment was “implicated in this instance” because the case “involves conduct by agents of the United States and Thailand to search the home and seize the property of an American Citizen living abroad”. U.S. v. Stokes, supra. The judge noted that while the 4th Amendment usually does not “apply to searches by foreign authorities in their own countries, even if the targets . . . are American citizens”, an exception applies “when the participation of United States agents in the investigation is so substantial that the action is a joint venture between the United States and foreign officials.” U.S. v. Stokes, supra. She held that the involvement of the ICE agents in the search was substantial enough to establish that it “was a joint operation” that implicated the 4th Amendment. U.S. v. Stokes, supra.

The judge then turned to Stokes’ first two arguments, both of which implicated the 4th Amendment’s Warrant Clause. After reviewing relevant cases, she held that it was a

The judge then took up Stokes’ third argument: that the search was “unreasonable” under the 4th Amendment. She noted that unlike the Warrant Clause, the Reasonableness Clause “`shelters [U.S.] citizens wherever they may be in the world from unreasonable searches by our own government.’” U.S. v. Stokes, supra (quoting U.S. v. Conroy, 589 F.2d 1258 (U.S. Court of Appeals for the Fifth Circuit 1979)). The judge ultimately held, though, that “the government’s conduct in this case was not unreasonable.” U.S. v. Stokes, supra.

She based that holding on the justification for the search (it occurred “only after lengthy investigations by both Thai and American authorities”) and the way the search was executed (the “entry into Stokes’ home was not unreasonable” nor was the way the search was conducted). U.S. v. Stokes, supra. As to the last point, the judge noted that the search “was conducted in an orderly fashion so as to avoid unnecessary harm or disruption to Stokes’s belongings” and “lasted roughly two hours, not an excessive amount of time”. U.S. v. Stokes, supra.

Everything but the last part makes sense to me. First of all, I don't think any US judge *could* issue an extraterritorial warrant anyway. Certainly, Congress could pass some special requirement regarding judicial oversight of warrants in that case, but I can't see how it could be Constitutionally required.

"[S]he found the ICE officers had no reason to know that the warrant did not authorize a search for child pornography." This is essentially arguing that the US officials were either idiots (thinking narcotic somehow meant pornography) or were told such niceties as specifying specifically what is to be searched for don't matter in Thailand.

It is objectively unreasonable for them to go along down either of these paths.

if minor commits a battery, a parent files a complaint, the cuprit admits by posting it on her facebook or myspace wall, or begins to text everyone bragging of her exploits will authorities have the ability to obtain this evidence? Is it a confession of guilt? Secondly, what laws are there to discourage slanderous and damaging gossip be spread on cyberspace(NET or SMS), going viral and harming reputations of children? HELP point me in direction! Thanks

I agree as to a U.S. judge's not being able to issue an extraterritorial warrant. More precisely, I agree that if a U.S. judge issued such a warrant, it would have absolutely no effect in the country where it was to be executed UNLESS the authorities in that country wanted to honor it somehow.

There is an argument, though, that even if a U.S. warrant does have any binding effect on the the other country where it's to be executed, it would satisfy U.S. requirements, and thereby regularize the process.

This is for jsmith:

I'll address the issues you raise in reverse order. First, as to the law governing online defamation, you might check out this site:

It gives you an overview of defamation law and online postings. You might also look at this site, which purports to tell people how to sue for online libel:

I don't vouch for the second one because I don't know anything about the author of it. The EFF site is likely to be accurate. You could also talk to a lawyer about all this, as much of it will probably depend on libel law in your state.

As to whether the information posted on myspace can be used in court, you might check out this blog post of mine:

It talks about a case in which the defendant’s Myspace postings were admitted at his trial.

As to whether the text messages could be admitted, it’ll depend on how they’re obtained (in compliance with the 4th Amendment, for one thing), what they say and whether they’re admissible under the applicable laws of evidence.

You could talk to a local prosecutor about all this, or a private attorney.

As an American lawyer working in Thailand, I may be able to elucidate certain of the transnational and other legal issues involved in this case. A US search warrant is not recognized by Thai courts, but its purpose is to be used in US Courts and not Thai courts. US law enforcement has a long history of working together with Thai authorities however. In furtherance of this cooperation, there a number of treaties between the US and Thailand that facilitate this relationship, including a Mutual Legal Assistance Treaty, and Extradition Treaty, and Amity Treaty and others.

One of the possible motives for the search warrant referring to narcotics rather than child pornography may be that the Narcotics Enforcement Division of the Thailand Police has much broader powers to search and seize in narcotics cases than in other criminal cases. Additionally the laws on child pornography are not as developed in Thailand as in the USA.

The US government has a long history of expanding its extraterritorial police and regulatory jurisdiction. There has recently been what appears to be an increase in extraterritorial police action that follows the passage of the PROTECT ACT (in regard to child sexual abuse and pornography.) However, in reality Americans are arrested in Thailand quite regularly, by Thai police cooperating with US police, and extradited back to the US for a number of different offenses.

A colleague recently published an article concerning the application of US sex laws in Thailand here: http://www.thailawforum.com/sex-crimes-in-thailand.html

Also, many years ago, I published a law journal article analyzing the extraterritorial jurisdictional powers of the US government in criminal matters in Thailand that can be found here: http://www.sgalegal.com/guide/enforcement.html

Thanks for clarifying all that, Joe . . . and thanks a lot for the links to the articles. I'll check them out.