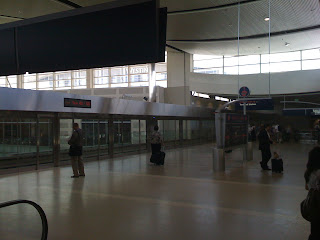 As Wikipedia explains, in U.S. tort law, “slip and fall”

is a claim or case based on a person slipping (or tripping) and falling. It is a tort, and based on a claim that the property owner was negligent in allowing some dangerous condition to exist that caused the slip or trip.

5. At all times material hereto, the Defendants. . . owed a duty to the Plaintiff, LELA TOMPKINS, and other members of the general public similarly situated, to design, build, repair, maintain and keep the Midfield Terminal, Main Tram Station, Detroit Metropolitan Airport and its premises in a reasonably safe condition and to protect, and/or warn the Plaintiff, LELA TOMPKINS, of any dangers which said Defendants' business and/or its employees and/or agents were, or should have been, aware existed.

6. Prior to December 29, 2005, Defendants . . . were advised of and attempted to repair a leak or leaks in the roof of the Midfield Terminal, Main Tram Station, Detroit Metropolitan Airport but negligently failed to properly perform the repairs and/or maintenance of the roof.

7. On December 29, 2005, the Plaintiff, LELA TOMPKINS, was a business invitee of the Defendants . . . at the Midfield Terminal, Main Tram Station, Detroit Metropolitan Airport.

8. On December 29, 2005, the Plaintiff, LELA TOMPKINS, was walking in the Midfield Terminal, Main Tram Station, Detroit Metropolitan Airport when and where she slipped and fell on water, liquid or other foreign substance on the floor, which condition existed in violation of applicable safety and building codes, as well as good design, building and maintenance practices and procedures.

(If you’re wondering how and why a tort case arising under Michigan law could be filed in a federal court, I’m assuming the case is brought under the court’s diversity jurisdiction. As Wikipedia notes, the U.S. Constitution gives federal courts the jurisdiction to hear suits in which the parties are “diverse” in citizenship, i.e., are from different states or different countries. The Complaint says Tompkins is a citizen of Florida and the defendants were citizens of Michigan. First Amended Complaint, ¶¶ 2 & 4, Tompkins v. Crown Corr., et al., supra.)

claims back and other injuries related to a December 29, 2005 accident at Detroit Metropolitan Airport. Plaintiff alleges that as a result of her injuries, she is impaired in her ability to work and to enjoy life.

The issue the federal judge who has the case is dealing with in this opinion does not go to the merits of the case, i.e., the defendants’ liability or lack of liability. He’s dealing with “Defendant Northwest Airlines’ Motion to Compel Plaintiff to Execute Authorizations” to release “records from her Facebook account.” Tompkins v. Detroit Metropolitan Airport, supra. Tompkins responded to the motion by objecting to “production of her entire Facebook account, including those sections she has designated as private and are therefore not available for viewing by the general public.” Tompkins v. Detroit Metropolitan Airport, supra.

Northwest Airlines’ Motion to Compel is part of the process of discovery in a civil case. As Wikipedia explains, discovery is the

pre-trial phase in a lawsuit in which each party, through the law of civil procedure, can obtain evidence from the opposing party by means of discovery devices including requests for answers to interrogatories, requests for production of documents, requests for admissions and depositions. . . . When discovery requests are objected to, the requesting party may seek the assistance of the court by filing a motion to compel discovery.

Both cases rejected claims that Facebook postings are privileged or that their disclosure would infringe upon a right of privacy. Instead, the cases ordered disclosure under the traditional discovery principles of Rule 26(b) of the Federal Rules of Civil Procedure, that is, `[p]arties may obtain discovery regarding any nonprivileged matter that is relevant to any party's claim or defense,’ and that for purposes of discovery, `relevant’ evidence `need not be admissible at the trial if the discovery appears reasonably calculated to lead to the discovery of admissible evidence.’

The judge then explained that in both of these cases,

the public profile Facebook pages contained information that was clearly inconsistent with the plaintiffs' claims of disabling injuries. In McMillen, the plaintiff alleged `substantial injuries, including possible permanent impairment, loss and impairment of general health, strength, and vitality, and inability to enjoy certain pleasures of life.’ However, the public portion of his Facebook account contained comments about his fishing trip and his attendance at the Daytona 500 race in Florida.

In Romano, the plaintiff claimed that she had sustained permanent, serious injuries that caused her to be largely confined to her house and bed. The public portions of her Facebook and MySpace accounts showed that to the contrary, `she [had] an active lifestyle and [had] traveled to Florida and Pennsylvania during the time period she claims that her injuries prohibited such activity.’

upheld the denial of a motion to compel Facebook information not on grounds of privacy or privilege, but because the defendant `failed to establish a factual predicate with respect to the relevancy of the evidence,’ finding that `defendant essentially sought permission to conduct ‘a fishing expedition’ into plaintiff's Facebook account based on the mere hope of finding relevant evidence.’ [McCann v. Harleysville Ins. Co., supra.]

The judge found that material posted on

a `private’ Facebook page, that is accessible to a selected group of recipients but not available for viewing by the general public, is generally not privileged, nor is it protected by common law or civil law notions of privacy. Nevertheless, the Defendant does not have a generalized right to rummage at will through information that Plaintiff has limited from public view.

Rather, consistent with Rule 26(b) and with the cases cited by both Plaintiff and Defendant, there must be a threshold showing that the requested information is reasonably calculated to lead to the discovery of admissible evidence. Otherwise, the Defendant would be allowed to engage in the proverbial fishing expedition, in the hope that there might be something of relevance in Plaintiff's Facebook account.

He then addressed the two specific arguments Northwest Airlines made in support of its motion to compel. Tompkins v. Detroit Metropolitan Airport, supra. In the first, it argued that Tompkins’

public postings, as well as some surveillance photographs, show the relevance of the private postings. They do not. The public postings, attached to Defendant's motion as Exhibit B, are photographs showing the Plaintiff holding a very small dog and smiling, and standing with two other people at a birthday party in Florida.

Unlike the situations in McMillen and Romano, these pictures are not inconsistent with Plaintiffs claim of injury or with the medical information she has provided. She does not claim that she is bed-ridden, or that she is incapable of leaving her house or participating in modest social activities. The dog in the photograph appears to weigh no more than five pounds and could be lifted with minimal effort.

If the Plaintiff's public Facebook page contained pictures of her playing golf or riding horseback, Defendant might have a stronger argument for delving into the nonpublic section of her account. But based on what has been provided to this Court, Defendant has not made a sufficient predicate showing that the material it seeks is reasonably calculated to lead to the discovery of admissible evidence. McCann v. Harleysville Ins. Co. of New York, supra (`Although defendant specified the type of evidence sought [access to plaintiff's Facebook account], it failed to establish a factual predicate with respect to the relevancy of the evidence.’).

Tompkins v. Detroit Metropolitan Airport, supra. (In a footnote, he pointed out that “[i]n the context of Social Security Disability claims,” courts have found that “`[m]erely because an individual is somewhat mobile and can perform some simple functions, such as driving, dishwashing, shopping, and sweeping the floor’” does not mean that he or she is not disabled. Tompkins v. Detroit Metropolitan Airport, supra (quoting Fulwood v. Heckler, 594 F. Supp. 540 (U.S. District Court for the District of Columbia 1984)).

He also pointed out that Northwest Airlines’

request for the entire account, which may well contain voluminous personal material having nothing to do with this case, is overly broad. `District courts have discretion to limit the scope of discovery where the information sought is overly broad or would prove unduly burdensome to produce.’ Surles ex rel. Johnson v. Greyhound Lines, Inc., 474 F.3d 288, 305 (U.S. Court of Appeals for the 6th Circuit 2007) (citing Federal Rule of Civil Procedure 26(b)(2)); accord Marshall v. Westinghouse Elec. Corp., 576 F.2d 588, 592 (U.S. Court of Appeals for the 5th Circuit 1978) (Rule 26 `does not, however, permit a plaintiff to ‘go fishing’ and a trial court retains discretion to determine that a discovery request is too broad and oppressive.’).

Posted by Susan Brenner at 2:59 PM

I just want to say that I think this is a very well written article. Specifically, it is easy to understand and is quite thorough. Ms. Brenner, thank you for writing this material in an interesting manner. Good job!