The Law Enforcement Privilege, Technology and the 4th Amendment 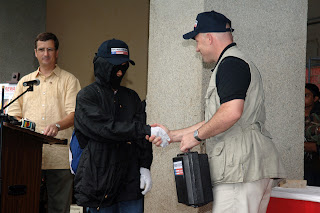 In most of my posts, I begin by outlining the facts that led someone to be charged with or investigated for criminal activity (or, in some instances, for conduct that could give rise to civil liability). This post is different. It deals with what I think is an interesting procedural issue, which means the facts that led to a prosecution are not of significance relevance in sorting out the legal issues.

This is all I know of how this prosecution arose:

The government indicted . . .Daniel Rigmaiden on July 23, 2008, charging him with 50 counts of mail and wire fraud, aggravated identity theft, and conspiracy. . . . A Superseding Indictment was filed on January 27, 2010. . . . The charges arise from an alleged scheme to obtain fraudulent tax refunds by filing electronic tax returns in the names of numerous deceased persons and third parties.

The charges are, as I noted above, not the focus of this post. Our concern here is with Rigmaiden’s efforts to argue that the government violated his 4th Amendment rights in the course of gathering the evidence that would later be used to charge him with the offenses outlined above. U.S. v. Rigmaiden, supra. As the opinion explains, the

government located and arrested [Rigmaiden], in part, by tracking the location of an aircard connected to a laptop computer that allegedly was used to perpetuate the fraudulent scheme. [He] alleges that the technology and methods used to locate the aircard violated his 4th Amendment rights.

[Rigmaiden] has sought extensive discovery from the government regarding the technology, methods, and personnel involved in tracking the aircard. Although the government has responded with the disclosure of substantial information, [he] contends that additional information must be disclosed if he is to litigate his 4th Amendment arguments effectively.

U.S. v. Rigmaiden, supra. (I suspect, though I could be wrong, that Rigmaiden is considering a Kyllo argument.)

The government opposed “disclosure of [the] additional information” Rigmaiden sought, arguing that it was “protected by a qualified law enforcement privilege under Roviaro v. United States, 353 U.S. 53 (1957)”. U.S. v. Rigmaiden, supra. To understand that argument, you need to understand a bit about federal criminal procedure.

As the federal judge who has this case noted in his opinion, historically defendants

in the United States have not enjoyed a right to unfettered discovery in criminal cases. Government disclosure of exculpatory evidence is, of course, required by Brady v. Maryland, 373 U.S. 83 (1962), and disclosure of other information is required by the Jencks Act, 18 U.S.C. § 3500. . . . Congress has also created limited additional discovery rights through Federal Rule of Criminal Procedure 16. This order particularly concerns the discovery rights found in Rule 16(a)(1)(E)(i).

The judge also noted that with regard “to most of the items” at issue in Rigmaiden’s efforts to obtain information about the technology used to locate the aircard, he had “satisfied the requirements of Rule 16(a)(1)(E)(i).” U.S. v. Rigmaiden, supra. The judge explained, though, that even if a defendant is

The Court explained that `[t]he purpose of the privilege is the furtherance and protection of the public interest in effective law enforcement. The privilege recognizes the obligation of citizens to communicate their knowledge of the commission of crimes to law-enforcement officials and, by preserving their anonymity, encourages them to perform that obligation.’ Roviaro, supra.

limited. Even sensitive law enforcement information must be disclosed if it is needed for an effective defense. `Where the disclosure of an informer's identity, or the contents of his communication, is relevant and helpful to the defense of an accused, or is essential to a fair determination of a cause, the privilege must give way.’ Roviaro, supra. In deciding whether the privilege applies and whether it has been overcome by a showing of need, the Supreme Court declined to establish fixed rules, holding instead that trial courts must engage in balancing on a case-by-case basis. . . .

Rigmaiden, of course, wasn’t seeking an informant’s identity; he wanted access to information about the technology the government used to investigate him. U.S. v. Rigmaiden, supra. That, too, can be protected by the privilege. As the judge who has this case explained,

Here, the prosecution argued that the technology used to locate Rigmaiden’s aircard,

the manner in which the technology was employed, and the identities of the agents who operated the equipment all constitute sensitive law enforcement information subject to the qualified privilege recognized in Roviaro and Van Horn. [Rigmaiden] does not disagree with the assertion that these cases can cover the kind of equipment and techniques used here. Rather, [he] contends that the technology used by the government is already publicly known and therefore not entitled to a qualified privilege, and, in any event, that his need for the information overcomes the privilege.

The judge explained that in “resolving this dispute,” he was required to “engaging in the balancing called for in Roviaro and Van Horn” and, in so doing, was required to “keep several additional legal principles in mind.” U.S. v. Rigmaiden, supra. The first was that Rigmaiden was seeking the information for use not at trial, but in a motion to suppress; the judge noted that the “level of government disclosure required for a suppression hearing under the 4th Amendment is less than the disclosure required for trial.” U.S. v. Rigmaiden, supra. He took the latter proposition from the Supreme Court’s decision in U.S. v. Raddatz, 447 U.S. 667 (1980), in which it found that the constitutional guarantee of due process does not “require the disclosure of an informant’s identity at a suppression hearing.” U.S. v. Raddatz, supra.

The second principle was that “the burden of proof at a suppression hearing is a preponderance of the evidence”, rather than the beyond a reasonable doubt standard that applies at trial. U.S. v. Rigmaiden, supra. The judge noted that Rigmaiden would, as a result, “only” have to show, by a preponderance of the evidence, that his 4th Amendment rights had been violated. U.S. v. Rigmaiden, supra.

The third principle was that in deciding whether Rigmaiden was entitled to “allegedly sensitive law enforcement information” to assert his 4th Amendment claim, the judge could consider not only the evidence the government had already disclosed, but also “whether there are alternative sources of information” on which Rigmaiden could rely in making his arguments. U.S. v. Rigmaiden, supra. The judge noted that this meant he could consider “the considerable evidence” Rigmaiden had acquired “from other sources.” U.S. v. Rigmaiden, supra.

The fourth and final principle was that in assessing the government’s right to invoke the law enforcement privilege, the judge could conduct “an ex parte hearing.” U.S. v. Rigmaiden, supra. The judge noted that he had, in fact, held such a hearing on December 14, 2011; at the hearing, FBI Supervising Agent Bradley Morrison “explained the nature of the equipment used in this case, how it was used, and why information sought by Defendant is law enforcement sensitive.” U.S. v. Rigmaiden, supra.

The judge then addressed Rigmaiden’s request. He began by noting that Rigmaiden wanted “highly specific and detailed information concerning the government's technology and techniques”, including the

[He] also seeks `all evidence relating to the real-time and historical geolocation techniques (e.g., triangulation techniques) and radio wave collection methods (e.g., cell site emulation, interrogation, active approach) used by the government agents/personnel and by the wireless device locators while searching for the aircard.’ . . . [And he] also seeks disclosures of the identities, training, and experience of agents and other personnel who operated the equipment when locating his aircard.

U.S. v. Rigmaiden, supra. At the ex parte hearing, Morrison explained how the

equipment used in locating the aircard operates, how it was used in this particular case, and why disclosure of information regarding the equipment and techniques used to locate the aircard would hamper future law enforcement efforts. Morrison also explained the training and skill required to operate the equipment, that only a limited number of agents have acquired the training and skill, and why disclosure of their identities would jeopardize their safety and make it impossible for the FBI to use these agents in future surveillance operations, eliminating them as valuable law enforcement assets.

Since the judge found Morrison’s testimony credible, he concluded that disclosing the

Disclosures of the specific identities of agents involved in this operation could jeopardize their safety and would effectively eliminate them as law enforcement assets used in electronic surveillance. With only a limited number of individuals trained and skilled in operating this equipment, disclosure would therefore seriously hamper law enforcement efforts.

The judge therefore denied Rigmaiden’s motion for discovery and ordered that he file his 4th Amendment motion to suppress by February 17, 2010. U.S. v. Rigmaiden, supra.