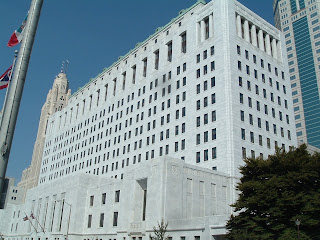 This post examines an opinion from the Ohio Supreme Court:  Disciplinary Counsel v. Bartels, 2016 WL 3344953 (2016).  The title of the case differs from the usual “Brown v. Smith” (civil case) or “State v. Jones” because the case involves neither a civil suit nor a criminal prosecution.
As the Supreme Court of Ohio’s website explains, the
Supreme Court of Ohio has the constitutional responsibility to oversee the practice of law in the state and has one of the most comprehensive disciplinary systems of any state in the nation. The Court has established three offices—Office of Disciplinary Counsel, Board of Professional Conduct, and the Lawyers' Fund for Client Protection--to exercise independent authority to assist the Court in meeting its responsibility as set forth in Section 5(b), Article IV, of the Ohio Constitution.
The Supreme Court of Ohio & the Ohio Judicial System.
The site goes on to explain that the
Office of Disciplinary Counsel investigates allegations and initiates complaints concerning ethical misconduct and/or mental illness of judges or attorneys under the Code of Professional Responsibility, the Rules of Professional Conduct, the Code of Judicial Conduct, and rules governing the Unauthorized Practice of Law, pursuant to the Ohio Supreme Court Rules for the Government of the Bar and the Government of the Judiciary.
The Supreme Court of Ohio & the Ohio Judicial System.
The opinion this post examines is  an opinion the Ohio Supreme Court issued in an attorney disciplinary proceeding: Disciplinary Counsel v. Bartels.  The “respondent” in the proceeding was N. Shannon Bartels, of Lima, Ohio. Disciplinary Counsel v. Bartels.  The court begins its opinion in the case by noting that Bartels
was admitted to the practice of law in Ohio in 1994. In March 2010, we publicly reprimanded Bartels for engaging in a sexual relationship with a client. Allen County Bar Assn. v. Bartels, 124 Ohio St.3d 527, 2010-Ohio-1046, 924 N.E.2d 833.
Disciplinary Counsel v. Bartels, supra.
As the Ohio State Bar Association’s website explains, if the Supreme Court finds that a lawyer has engaged in conduct that is inconsistent with his/her ethical responsibilities, the court can impose any of four types of discipline:
Getting back to the Bartels opinion, the Supreme Court went on to explain how this proceeding arose:
On November 25, 2014, relator, disciplinary counsel, charged Bartels with professional misconduct for soliciting or engaging in sexual activity—texting sexually oriented messages—with a client. The parties stipulated that Bartels had committed the charged misconduct and that a stayed one-year suspension was the appropriate sanction. A panel of the Board of Professional Conduct recommended that the agreement be adopted except that the stay be subject to conditions. The board, however, amended the recommended sanction and instead recommended a one-year suspension with six months stayed on conditions.

Bartels has filed objections to the board's recommendation, and relator has agreed with her arguments. . . .
Disciplinary Counsel v. Bartels, supra.
The Supreme Court’s opinion then went on to outline the facts that led the Disciplinary Counsel to charge Bartels with professional misconduct:
After spending portions of her legal career working for other entities, Bartels reopened a solo law practice in 2012, focusing primarily in family law and workers' compensation.

In November 2012, Troy Bailey retained Bartels to represent him in his divorce. The divorce was finalized by court entry in July 2013. However, commencing in late February or early March 2013, Bartels and Bailey began exchanging multiple text messages with each other that were sexually oriented. The messages continued for approximately one month and were mutual and reciprocal in their sexual content, but Bartels and Bailey did not actually engage in sexual intercourse with each other.

In April 2013, Bartels received a text from Bailey's cell phone number containing a veiled threat that if the results of the divorce proceeding were not satisfactory to Bailey, the sexually oriented texts as well as nude photographs that Bartels had exchanged with him would be sent to the disciplinary authorities. During a May 2013 phone conversation with Bartels about his divorce proceeding, Bailey put a female—later identified as his girlfriend—on the line who told Bartels that she `had better get Bailey everything he wanted’ from the proceeding. The female also told Bartels to bring $3,000 to a hearing scheduled for six days later. At the hearing, neither Bailey nor Bartels mentioned the threat, nor was any monetary payment made.

For several months after the hearing, neither Bartels nor Bailey mentioned their message exchanges or the purported extortion attempt. Then, in September 2013, Bartels received a text message from Bailey's cell phone number stating that the Ohio State Bar Association and the Better Business Bureau would be contacted if Bartels did not refund at least $2,500 to Bailey. At that point, Bartels reported the extortionate conduct to the Allen County Sheriff's Office and gave that office a statement. Following a law-enforcement investigation, Bailey and his girlfriend, who had sent the extortionate text messages from his cell phone, were indicted and convicted of obstructing justice.
Disciplinary Counsel v. Bartels, supra.
The opinion then goes on to explain that the
parties stipulated and the board found that Bartels's conduct in engaging in sexually oriented text messaging with her client violated [Ohio Rules of Professional Conduct Rule] 1.8(j) (prohibiting a lawyer from soliciting or engaging in sexual activity with a client unless a consensual sexual relationship existed prior to the client-lawyer relationship). We adopt the board's findings of fact and misconduct.
Disciplinary Counsel v. Bartels, supra.
The Supreme Court then took up the sanction that was appropriate for Bartel’s misconduct, explaining that
[w]hen imposing sanctions for attorney misconduct, we consider several relevant factors, including the ethical duties that the lawyer violated and the sanctions imposed in similar cases. Stark Cty. Bar Assn. v. Buttacavoli, 96 Ohio St.3d 424, 2002-Ohio-4743, 775 N.E.2d 818, ¶ 16. In making a final determination, we also weigh evidence of the aggravating and mitigating factors listed in [Supreme Court Rules fort he Government of the Bar of Ohio] V(13).

In Detweiler II, however, Detweiler repeatedly sent a vulnerable client sexually oriented text messages, including nude photos, that were unwelcome and unsolicited. The client `felt trapped’ and could not afford new counsel at that stage of the litigation. Id. at ¶ 5. Although the board recommended that Detweiler be suspended for one year with six months stayed on condtiions, id., we determined that to adequately protect the public from future harm, a one-year actual suspension from the practice of law was appropriate for his misconduct, id. at ¶ 20.

Here, based on testimony at the hearing, the panel was troubled by Bartels's lack of appreciation that her conduct was contrary to the letter and spirit of the rule. Therefore, although it recommended adoption of the parties' agreement, including the fully stayed one-year suspension, the panel further recommended that the stay be conditioned on Bartels's completion of six additional hours of continuing legal education (`CLE’) on professional conduct and professionalism focused on proper communications and interactions with clients and, upon reinstatement, that she work for a period of one year with a mentoring attorney approved by relator. The board, however, recommends that we suspend Bartels from the practice of law for one year with only six months stayed, subject to the two conditions recommended by the panel.

To support its recommendation, the board cited Lake Cty. Bar Assn. v. Mismas, 139 Ohio St.3d 346, 2014-Ohio-2483, 11 N.E.3d 1180, in which we suspended an attorney for one year with six months stayed for conduct that included sending explicit text messages to a law-student employee and demanding sexual favors as a condition of her employment. We found that Mismas abused the power and prestige of our profession with his conduct and thus deserved a harsher sanction than that proposed by the panel and board, who, as here, also considered the Detweiler decisions.
Disciplinary Counsel v. Bartels, supra.
And, finally, the opinion explains that Bartels
filed objections to the board's report, and relator joined her request for a stayed one-year suspension. Both parties noted that the conduct was mutual and consensual, she did not have sexual relations with her client, the exchanges did not impair her ability to effectively advocate on behalf of her client, and her conduct did not rise to the same level as that in Mismas, in which the respondent abused his position of power and took advantage of his student-employee's vulnerable position. Bartels also noted that both Detweiler II and Mismas were decided after Bartels's conduct in this case had occurred and that she therefore would not have known that mutual, consensual text messaging could be included within the meaning of `sexual activity’ under Ohio Rules of Professional Conduct 1.8(j).

We disagree with the parties and find, consistently with the board, that Mismas is instructive here. We emphasize our statement in Disciplinary Counsel v. Booher, 75 Ohio St.3d 509, 510, 664 N.E.2d 522 (1996) that `the burden is on the lawyer to ensure that all attorney-client dealings remain on a professional level.’ Because this is Bartels's second disciplinary action within five years for a violation of the same rule and her responses to questions at the hearing indicate a lack of awareness of the nature of her wrongdoing, we conclude that the board's recommended sanction is the more appropriate option.