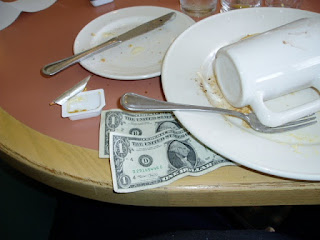 On appeal, he made three arguments, only one of which I’ll address in this post.  That argument challenged his conviction under 18 U.S. Code § 201(c), the paying an illegal gratuity charge.  U.S. v. Ring, supra.

The first of the other two arguments challenged his convictions for honest-services fraud; more precisely, Ring claimed that the district court judge who presided over his trial improperly instructed the jury on “the quid pro quo” element of the offense. For more on that issue, check out the article you can find here. The other argument challenged the judge’s admission of certain evidence.

To understand the illegal gratuity charge (and the whole prosecution), it is necessary to understand what Ring was doing prior to being indicted:

[A]fter stints working for a member of the U.S. House of Representatives, a U.S. Senate committee, and the House Republican caucus, [Ring] joined Jack Abramoff's lobbying team in 1999. Until its fall from grace, Abramoff's group maintained a successful and wide-ranging lobbying practice in Washington, D.C. Playing a role some characterized as the team's `chief operating officer,’ Ring managed some of Abramoff's most important clients and maintained close relationships with several public officials.

Ring and the other Abramoff lobbyists relied heavily on campaign contributions to maintain relationships with elected officials and promote their clients' political interests. But it was Ring's other lobbying tactics that got him in trouble.

These tactics chiefly included treating congressional and executive branch officials to dinners, drinks, travel, concerts, and sporting events. Ring referred to officials with whom he had the closest ties and with whom his lobbying efforts were most successful as his `champions’ As regular beneficiaries of Ring's largesse, these `champions’ often took actions that were favorable to Ring's clients.

That brings us to the illegal gratuity charge.  The appellate court noted explained that the

illegal-gratuity statute makes it unlawful to `give[ ], offer[ ], or promise [ ] anything of value to any public official . . . for or because of any official act.’ 18 U.S. Code § 201(c). The statute defines `official act’ as `any decision or action on any question, matter, cause, suit, proceeding or controversy, which may at any time be pending, or which may by law be brought before any public official, in such official's official capacity, or in such official's place of trust or profit.’ 18 U.S. Code § 201(a)(3). This Circuit treats the question whether an action constitutes an `official act’ as one of `sufficiency of the evidence.’ See Valdes v. U.S., 475 F.3d 1319 (U.S. Court of Appeals for the District of Columbia Circuit 2007). . . .

The court then addressed the factual basis of this count, noting Ring was charged

with paying an illegal gratuity when he gave Washington Wizards tickets to an attorney at the Justice Department's Office of Intergovernmental Affairs as a reward for helping to expedite review of a visa application for a foreign student seeking to attend a private school owned by Abramoff. Upon receiving a request for assistance from Ring, the attorney forwarded Ring's email to another Justice Department official who recommended he contact someone at the U.S. Immigration and Naturalization Service (`INS’).

Following this advice, the attorney called an INS official's secretary and urged her to expedite the application. He then forwarded Ring's email to the secretary along with a personal note:

`Thank you for looking into this. I do not know if anything can be done but I said I would look into it. If, for any reason, nothing can be done, please email me so I can pass that along. Thank you very much for you[r] assistance.’

The secretary, in turn, passed the email along to five different INS officials in an effort to, as she testified, `make sure . . . action was being taken to answer the request’ because it had come from `higher headquarters’ at the Department of Justice.

Within a single business day, INS agreed to expedite the application. After getting the news that the attorney's efforts had been successful, Ring sent Abramoff an email reporting that the attorney had `[h]elped on the school and [was] now looking for tickets’ to two Washington Wizards basketball games. Abramoff promptly agreed, and the attorney attended the games on Abramoff's dime.

The Court of Appeals noted that by

The court explained that in Valdes v. U.S., supra, it considered the

scope of `official act’ in the illegal-gratuity context. There, a police officer accepted money from an undercover agent and, at the agent's request, conducted searches of license-plate and warrant databases. . . . Emphasizing that the illegal-gratuity statute is concerned not with purely informational inquiries, but rather with `inappropriate influence on decisions that the government actually makes,’ . . . we held that the jury lacked sufficient evidence to find that the officer's searches constituted `official acts’. . . .

In so doing, we listed some examples of acts that `the statute easily covers: a clerk's manufacture of official government approval of a Supplemental Security Income benefit, as in U.S. v. Parker, 133 F.3d 322 (U.S. Court of Appeals for the 5th Circuit 1998); a congressman's use of his office to secure Navy contracts for a ship repair firm, as in U.S. v. Biaggi, 853 F.2d 89 (U.S. Court of Appeals for the 2d Circuit 1988); and a Veterans' Bureau official's activity securing a favorable outcome on a disability claim, as in Beach v. United States, 19 F.2d 739 (U.S. Court of Appeals for the 8th Circuit 1927) (based on a predecessor statute).’ Valdes v. U.S., supra. We further noted that `official acts’ include acts that have been established as part of an official's position by virtue of past practice or custom.  Valdes v. U.S., supra.

Ring based his argument on the Court of Appeals’ holding in Valdes, claiming that here, as in that case,

no reasonable juror could have found that the attorney's forwarding of the email constituted an `official act.’ Because the attorney lacked decision-making authority with respect to visa applications, Ring argues that the attorney's intercession was not a `decision or action’ on a `question, matter, . . . [or] proceeding’ that was or ever would be `pending’ or `brought’ before him. 18 U.S. Code § 201(a)(3).

Instead, according to Ring, the attorney's act of forwarding the email to the INS secretary amounts to nothing more than an informational inquiry, analogous to the database search in Valdes or a receptionist's transfer of a phone call.

The Court of Appeals did not buy his argument.  U.S. v. Ring, supra.  It noted, first, that

[c]onsidering the evidence in the light most favorable to the government,. . .  we think it clear that a rational jury could have found that the attorney's efforts to expedite the visa application qualified as official action.

The secretary who received the attorney's email testified that the Justice Department's Intergovernmental Affairs Office was part of INS's `higher headquarters’ and was `responsible for . . . assisting other agencies and other state and local governments if they ha[d] an issue.’ In other words, unlike attorneys in DOJ units who litigate on behalf of agency clients, attorneys in the Intergovernmental Affairs Office are responsible for reaching across agency boundaries to get things done. And as the secretary went on to explain, she felt unable to ignore the attorney's request because of the office he held. Ultimately, the attorney's swift success in procuring expedited review spoke for itself.

The court then explained that

[c]ontrary to Ring's contention, the attorney's actions are categorically different from those Valdes suggests fall outside the scope of `official action.’ Unlike the Valdes police officer, the attorney was neither `moonlighting’ nor making a purely informational inquiry. . . . Rather, the attorney acted in his official capacity to influence the visa application process, conduct better analogized to an action Valdes explained was clearly within the statute's coverage: `a congressman's use of his office to secure Navy contracts for a ship repair firm.’ Valdes v. U.S., supra.

To be sure, the attorney himself lacked independent authority to expedite visa applications. But Ring's attempt to import a requirement that the official in question have ultimate decision-making authority into the definition of `official act’ has no statutory basis. . . . Indeed, the statute states that `official act[s]’ include both decision[s]’ and `action[s].’ 18 U.S. Code § 201(a)(3).

For this and other reasons, the Court of Appeals affirmed Ring’s convictions and sentence.  U.S. v. Ring, supra.  If you would like to read more about the case, check out Wikipedia’s entry on Kevin Ring.
Posted by Susan Brenner at 9:45 AM