The Judge, the “Obscene Videos” and the State Computer 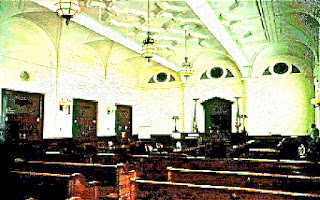 The attorney in question was an Associate District Judge for Harper County, Oklahoma when the events at issue occurred.  State v. Olmstead, supra.  The disciplinary case began when Olmstead “entered into a plea agreement and pled no contest to the crime of violation of the Oklahoma Computer Crimes Act in violation of 21 Oklahoma Statutes § 1953(A)(3).” State v. Olmstead, supra.

Olmstead was originally charged with “19 counts of downloading obscene material”, but those charges were, for some reason, “amended to a single count of improper use of a computer” under § 1953(A).  State v. Olmstead, supra.  If you’re interested, you can find the original charges here.  Section 1953(A)(3) makes it a crime to “[w]illfully exceed the limits of authorization and damage, modify, alter, destroy, copy, delete, disclose or take possession of a computer, computer system, computer network or any other property”.

The trial judge who took the plea “deferred the imposition of sentencing until the 10th day of January 2013”, put Olmstead on probation and ordered him to “complete a mental health evaluation and complete any follow up treatment.”  State v. Olmstead, supra. Our concern, though, is with the disciplinary proceeding.

This, according to the opinion, is the statement of facts in Olmstead’s no contest plea:

On or about the 10th day of February, 2011 through the 23rd day of March, 2011 the crime of Violation of the Oklahoma Computer Crimes Act was committed in Harper County by the defendant George Wayne Olmstead who as the duly-elected and duly-qualified Associate District Judge for Harper County, Oklahoma;

that prior to the date was issued a State E-mail address and provided a computer with internet access through the Oklahoma Computer Information System provided for his use in his judicial duties including the Rules for Using the Oklahoma Court Information System duly adopted and approved by the Supreme Court of Oklahoma which provides that each user will not download inappropriate material as describe in said Rules,

and that George Wayne Olmstead did then and there did download, receive, obtain, and store thereafter certain inappropriate material contrary to the provision of Section 1953 of Title 21 of the Oklahoma Statutes and against the peace and dignity of the State of Oklahoma.

One count of the original charging document alleged, for example, that “on or about the 10th day of February, 2011”, Olmstead

did then and there use State-owned and –issued computer, computer network, and Internet services by willfully and knowingly make use of said State-owned computer, computer network and Internet services to connect with Internet sites offering obscene videos for downloading, and did then and there receive, obtain, download [and] store . . . certain obscene and pornographic videos of the following titles:

Indictment, State of Oklahoma v. George Wayne Olmstead, Harper County, Oklahoma (Case No. CF-2011-26).  The other counts alleged basically the same conduct, with different videos.  According to the press release you can find here, Olmstead downloaded “more than 32 hours of obscene videos” from his office.

As noted above, Olmstead resigned his judicial office and the Oklahoma State Bar Association opened the disciplinary proceeding that produced this opinion.  State v. Olmstead, supra.  The disciplinary trial panel suggested a “public reprimand” was  “the proper punishment” for Olmstead, but the Oklahoma Bar Association argued, to the state Supreme Court, that “public censure would be insufficient to protect the public confidence in the legal system” and suggested “Olmstead be suspended from the practice of law.”  State v. Olmstead, supra.

(As this memorandum explains, the range of sanctions that can be imposed range from probation, admonition, reprimand, and suspension to disbarment, i.e., to basically being expelled from the profession.)

In his arguments to the Supreme Court, Olmstead claimed

several factors mitigate his punishment. He had several friends and other attorneys testify as to his reputation as a competent lawyer. He treated the people before him with respect the testimony reflects. He was also a wonderful father and grandfather.

Evidence was also presented as to the lack of legal representation in Harper County. Olmstead himself testified as to his history as a pilot in Vietnam. He testified that he received the Air Medal, twice received the Distinguished Flying Cross, a Bronze Star and the Army Commendation Medal of Honor. He was discharged from the U.S. Army as a Captain and returned to Harper County and helped operate the family farm/ranch.

He received his bachelor's degree from Northwestern Oklahoma State University in 1984 and his Law Degree from the University of Oklahoma in 1987. He practiced law in Buffalo, Oklahoma for several years until the sitting Associate District Judge retired and then he ran for that office. He resigned his position as Associate District Judge as part of the plea agreement and now requests this Court to give him a public reprimand.

The Supreme Court, though, was not persuaded:

This Court does not agree that all the factors proposed by Olmstead are mitigating. The nature of the content and volume of the material downloaded by Olmstead cannot be minimized. The act of downloading adult sexually suggestive materials in tremendous volume on a State owned computer is a very serious offense which should not be minimalized.

The bare mitigating factors that he is a good lawyer and a good person cannot overcome the fact that he knowingly used his state-owned computer to download sensitive materials in tremendous volume for his personal use. His arguments that he has been punished enough by the loss of his job and public embarrassment is in fact not enough punishment for his lack of judgment and respect for the position he held.

At a minimum, [Olmstead’s] conduct violated Rule 8.4(b) of the Oklahoma Rules of Professional Conduct, 5 O.S.2011, Ch.1, App. 3–A, which provides, `[i]t is professional misconduct for a lawyer to . . .  commit a criminal act that reflects adversely on the lawyer's honesty, trustworthiness or fitness as a lawyer in other respects.’ His conduct also violated Rule 1.3 of the Rules Governing Disciplinary Proceedings, which provides:

`The commission by any lawyer of any act contrary to prescribed standards of conduct, whether in the course of his professional capacity, or otherwise, which act would reasonably be found to bring discredit upon the legal profession, shall be grounds for disciplinary action, whether or not the act is a felony or misdemeanor, or a crime at all. Conviction in a criminal proceeding is not a condition precedent to the imposition of discipline.’

These violations warrant significant discipline particularly in the absence of mitigating evidence or some explanation to lessen the discredit [Olmstead] has brought on both the judiciary and legal profession.

The court then commented on the purpose of lawyer disciplinary proceedings:

A license to practice law is conferred for the public's benefit. . . . The goal of lawyer discipline is to safeguard the public's interest, the judiciary, and the legal profession; to promote the integrity of the judicial system and process . . . and to deter similar misconduct. . . .

The purpose of lawyer discipline is not to punish the offending lawyer. . . . This Court represents that every person who holds a license to practice law is worthy of the public's confidence in carrying out professional duties. . . .

Although each disciplinary proceeding is unique, we are guided by the discipline imposed in similar cases. . . .

After reviewing other, somewhat similar cases, the Supreme Court found that

[p]ast behavior being the best forecaster of future behavior, suspension for one year is the only discipline which will protect the public and restore integrity to the bar lost by Olmstead's misconduct.

Although the citizens of Harper County may have limited access to local legal counsel as a result of this suspension, Olmstead's actions have brought such disrepute upon the legal profession and the judiciary that significant discipline is warranted.

It therefore arrived at the following sanctions:

Olmstead's misconduct violated the rules governing a lawyer's conduct, His actions were egregious, were an abuse of trust, brought great disrepute to the legal profession, and the judiciary. Suspension from the practice of law is the discipline which will accommodate the goals of lawyer disciplinary proceedings.

George Wayne Olmstead is therefore suspended from practice for the period of one year.

The costs of the proceedings in this disciplinary action in the amount of $2,212.01 are to be paid by [Olmstead] within ninety days from the day this opinion becomes final. . . .

State v. Olmstead, supra.
Posted by Susan Brenner at 7:42 AM

Cyber crime refers to any crime that involves a computer and a network.
Please avoid it and keep safe..
internet attorney
Thank you....