The 4th Amendment, the "Search" and the Car Alarm 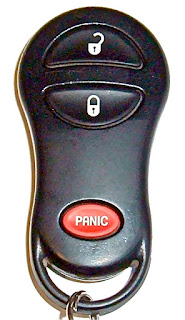 After being convicted in a bench trial of possessing “cocaine in an amount more than 4 grams and less than 200 grams” in violation of Texas Health & Safety Code §§ 481.115(a) & (d) and sentenced to 25 years in prison, Larry Bruce Wiley appealed.  Wiley v. State, __ S.W.3d __, 2012 WL 3773293 (Texas Court of Appeals 2012).  (His sentence was based, in part, on the fact that he “pleaded true to two enhancement paragraphs that alleged prior felony convictions,” and increased what it would otherwise have been.  Wiley v. State, supra.)

Houston Police Department Officers A. Robles and K. Wagner went to a part of Houston known for narcotics activity to serve felony warrants. It was approximately 10:45 p.m., and it was dark. The officers saw a person leaning into the open window of a parked vehicle.

The man put his hand into the vehicle through the window and then removed it. Robles believed he had witnessed a drug transaction, and he pursued the suspect on foot. Wagner followed them in the patrol car.

Robles walked back toward the spot where he saw an object thrown to the ground, and he saw Wiley `looking like he was bending down to pick something up.’ Robles testified, `I saw . . . [Wiley] -- looked like he had picked something up. And he looked back and saw me and then went and turned away from me like he was attempting to conceal or hide something he had just picked up.’ Robles detained Wiley on the suspicion that he had picked up narcotics or tampered with evidence.

Robles asked Wiley if he lived nearby. Wiley [said] he did not, and . . . stated that he had gotten a ride from a friend. In response to Robles's inquiry, Wiley said he did not have a car. After Wiley provided his name, birthdate, and address, Robles determined there was a warrant for his arrest, and placed him under arrest. He found that Wiley had a set of car keys and a wad of money, more than $2,000, mostly in $20 bills.

As they drove away in the patrol car, Robles pushed the car alarm button on Wiley's keys. Less than a block from where the arrest took place, a car alarm went off. The car was legally parked on a public street.

The officers stopped beside the car, checked the license plate, and determined it was registered in Wiley's name. They approached the car and used their flashlights to look through the windows. They saw what they believed to be crack cocaine and cocaine . . . on the rear seat side of the car. They opened the car door, retrieved the suspected narcotics, and conducted a field test, which was positive for cocaine. Then they had the car towed.

Prior to his trial, Wiley’s attorney filed a motion to suppress, in which he argued that

[Wiley] was stopped because the officers claim . . . they observed [him] picking up something from the street that may have been thrown down by a suspect they were chasing. Then they arrested him for an outstanding warrant. Then they found his car and searched it. The search of his car violated the 4th Amendment of the U.S. Constitution and the Texas Constitution. Therefore [Wiley] moves this [sic] matters be suppressed.

The trial judge did not rule on the motion to suppress prior to the trial.  Wiley v. State, supra.  At Wiley’s trial, Wagner and Robles testified about the

events that led up to [his] apprehension and arrest. As to his use of the alarm button to locate Wiley's car, Robles testified that when his search of Wiley revealed keys to a vehicle, his suspicion was aroused because Wiley had told him that he did not have a car, not that he simply had not driven his car that night.

After both sides had presented their evidence and rested, Wiley presented

arguments on his motion to suppress evidence. He argued that Robles did not have reasonable suspicion sufficient to justify his initial stop nor was his detention reasonable. Wiley argued that the officers' use of the remote car alarm to locate his car was unreasonable because they did not have a search warrant and that it was unlikely that the narcotics were in plain view because it was dark outside. . . .

The trial judge denied the motion to suppress, explaining that

`It's my understanding . . . that they come upon the scene and . . . indicated that they observed something that appeared to be a narcotics transaction. They were in a high-narcotics area. And so, when they stopped to get out, the fellow who was standing ... took off running. And even he admitted he was smoking a marijuana cigarette and threw it down on the ground.’

` . . . Officer Wiley [sic] said he saw the defendant come over. And he thought he may have been picking up something. He went back to the scene and couldn't find anything that was thrown on the ground. And he said he went back and I think Wiley was behind the vehicle and he did make some move or something. . . . But anyway, he went up to Wiley. And at that particular point in time in order to find out what was going on, he patted him down and found the large roll of money in his pocket. . . .

`And then . . . they ran the warrants and found out he did have some warrants. And . . . that's when they took everything out of his pockets and placed him inside the patrol car. And he had the keys and they activated the car through the remote and found the -- and found the automobile. And then they found the drugs in the back seat. That's the way I remember the testimony from basically trying to put everything together.’

As noted above, in his appeal Wiley argued that Robles’ “pressing the alarm button on his car keys” was an unlawful 4th Amendment search.  Wiley v. State, supra. Here is how the two sides framed their arguments on this issue:

Wiley argues that the use of the alarm button to locate his car was not justified as part of a search incident to arrest because he was not within reaching distance of the passenger compartment at the time of his arrest or at the time the officer activated the alarm, and because it was not reasonable to believe the car contained evidence of the offense for which he was arrested.

Wiley's argument presupposes that the officer's use of the car alarm button was a search under the 4th Amendment and concludes the search was unlawful because it was warrantless and did not fall within the `search incident to arrest’ exception to the warrant requirement. The State contends the use of the alarm button was not unlawful because it was not a search at all.

In ruling on their arguments, the Court of Appeals noted, first, that the 4th Amendment creates a right to be free from “unreasonable” searches and seizures and, second, that “[w]arrantless searches are per se unreasonable unless the State can prove that the search was conducted pursuant to a recognized exception to the warrant requirement.”  Wiley v. State, supra.  It also noted that in his appeal Wiley did not challenge the

lawfulness of the officer's search of his person incident to that arrest or the  seizure of his car keys. Rather, he argues only that the officer's subsequent use of the alarm button was itself an unlawful search and that the court therefore should have suppressed the evidence found in his car.

The Court of Appeals explained that a 4th Amendment “search” violates a “reasonable expectation of privacy”.  Wiley v. State, supra.  As I’ve noted in earlier posts, the Supreme Court held in Katz v. U.S., 389 U.S. 347 (1967) that you have a reasonable expectation of privacy in a place or thing if (i) you subjectively believe it is private and (ii) society accepts your belief as objectively reasonable.

use of a keyless entry device on the defendant's key fob to locate his car was an unreasonable search under the 4th Amendment. U.S. v. Cowan, 674 F.3d 947 (U.S. Court of Appeals for the 8th Cir. 2012). The court observed that the defendant did not have a reasonable expectation of privacy in the identity of his car. Id.

The court rejected the defendant's assertion that his privacy interest was in the electronic code, because `[t]he officers did not attempt to discover the code.’ Id. The court stated, `Pressing the alarm button the key fob was a way to identify the car and did not tell officers anything about the fob's code or the car's contents.’ Id.

Finally, the court explained that the use of the key fob was not a physical intrusion on a constitutionally protected area for the purpose of obtaining information because the officer had lawfully seized the keys pursuant to a search warrant and because `the mere transmission of electric signals alone is not a trespass.’ Id.

The court found that Wiley’s car was parked

on a public street. He had no reasonable expectation of privacy in the identity of his car. . . . Pressing the alarm button on his car key and activating the car's alarm revealed only that the keys found on Wiley matched the car parked nearby. . . .

As in Cowan, Wiley has not shown how the use of the car alarm button violated a reasonable expectation of privacy in the encrypted code, which the officers did not attempt to discover. . . .

Thus, we conclude that the use of the alarm button to locate Wiley's car did not violate the 4th Amendment under the Katz reasonable-expectation-of-privacy test because Wiley did not show he had a reasonable expectation of privacy that was invaded by the officer's actions.

The Court of Appeals therefore held that because Wiley did not “contest that the officer lawfully possessed his keys as a seizure incident to his arrest, our conclusion that simply pressing a button to identify the associated car did not constitute a `search’ for 4th Amendment purposes is determinative of the issue on appeal.”  Wiley v. State, supra.  For that and other reasons, it affirmed his conviction and sentence.  Wiley v. State, supra.

Posted by Susan Brenner at 8:47 AM