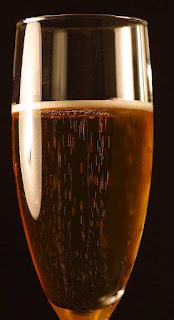 New Year's Eve party was held at the Edwards Brothers Hall, also known as Knights of Columbus Hall, or just simply `the K,’ in Middletown, Ohio. Blake, a member of the `Baltimore Street Gangsters,’ also known as the `Baltimore Street Gang’ (BSG), and a few other gang members attended. . . . Blake was seen carrying a gun.
At approximately 1:30 a.m., Blake exchanged some words with fellow guest, Terron `Skinny’ Moton. Blake then shot Moton, causing him to collapse to the ground. Blake stood over Moton and shot him two more times.

the police became aware that the BSG, including Blake, were involved in the shooting. Detective Rich Bush subpoenaed Blake's cellular telephone records and found a series of text messages texts from the night of the shooting and the days following the shooting which implicated Blake's involvement in the death of Moton.

Blake’s problem was that his lawyer did not object to the admission of the texts when the prosecution offered them into evidence.  State v. Blake, supra.  As the Court of Appeals explained, because he failed to object

on these grounds at trial, these arguments are waived unless the admission of the cellular telephone records amounted to plain error. State v. Wagers, 2010–Ohio–2311 (Ohio Court of Appeals 2010).  An alleged error is plain error only if it is `obvious,' and `but for the error, the outcome of the trial clearly would have been otherwise.' State v. Jackson, 2011-Ohio—5593 (Ohio Court of Appeals 2011).

The Court of Appeals began with Blake’s second argument, which went to the fact that the text messages constituted hearsay.  As Wikipedia explains, and as I’ve noted in other posts, hearsay is essentially second-hand evidence, i.e., it consists of Jane Doe’s testifying that Sam Smith told her X about the defendant.  Law excludes that kind of evidence because, while Smith’s lawyer can test the truth of Doe’s testimony that Smith told her X, the lawyer cannot use cross-examination to test the truth of what Smith allegedly said.

The court therefore noted that hearsay is generally inadmissible

unless it falls within one of the numerous exceptions found in the Rules of Evidence. State v. Sims, 2009–Ohio–550 (Ohio Court of Appeals 2009).  One such exception is the business records exception under Ohio Rule of Evidence 803(6).

It also noted that this court had found that the business record exception can apply to “a cellular telephone record”.  State v. Blake, supra. And the Court of appeals explained that

`To qualify for admission under Rule 803(6), a business record must manifest four essential elements: (i) the record must be one regularly recorded in a regularly conducted activity; (ii) it must have been entered by a person with knowledge of the act, event or condition; (iii) it must have been recorded at or near the time of the transaction; and (iv) a foundation must be laid by the “custodian” of the record or by some “other qualified witness.’

The court then looped back to Blake’s first argument:

Even if these elements are established, a business record may be excluded if the `source of information or the method or circumstances of preparation indicate lack of trustworthiness.’ State v. Davis, supra, Ohio Rule of Evidence 803(6). However, before a business record is admitted pursuant to Ohio Rule of Evidence 803(6), the record must be properly identified or authenticated.

As Wikipedia explains, and as I have noted in earlier posts, the requirement of authentication basically means that the proponent of the evidence (the party offering it into evidence) must show that it is what it is claimed to be.  As the Court of Appeals explained, the requirement of authenticating evidence as a condition precedent to admissibility is

satisfied by introducing `evidence sufficient to support a finding that the matter in question is what its proponent claims.’ Ohio Rule of Evidence. . . . This threshold requirement for authentication . . . is low and does not require conclusive proof authenticity. State v. Easter, 75 Ohio App.3d 22, 598 N.E.2d 845 (Ohio Court of Appeals 1991). Instead, the state only needs to demonstrate a `reasonable likelihood’ that the evidence is authentic. State v. Thomas, 2012–Ohio–2430 (Ohio Court of Appeals 2012).

Blake argues that the text messages should have been authenticated pursuant to Ohio Rule of Evidence 901(B)(6) and compared the messages to a telephone conversation.

The Court of Appeals rejected Blake’s argument that the messages were analogous to a phone conversation and found, instead, that “these records are more analogous to a business record and could have been authenticated as such.”  State v. Blake, supra.  It noted that in order to properly authenticate documents as business records, a witness, “such as an employee of the company,” must testify as to the regularity and reliability of the business activity involved in creating the record.  State v. Blake, supra.  As Wikipedia notes, this is because the exception is based on the rationale that employees are under a duty to be accurate in observing, reporting and recording business facts and data.

The court then found that the testimony of Paula Papke, “a manager with Cincinnati Bell Corporate Security and the custodian of the records,” both authenticated the messages and qualified them for admission under the business records exception:

Papke identified Exhibit 40 as the content of text messages sent from and received by Blake's cellular telephone number December 29, 2010, through January 5, 2011. Papke testified that a limited amount of text message records are stored on the company's network and kept in the usual course of business. She explained that Cincinnati Bell retains these records for about seven days.

Papke's testimony provided adequate foundation for the records pursuant to Ohio Rules of Evidence 901(A) and 803(6).  As a witness with knowledge of the business operations of Cincinnati Bell, Papke's testimony presented sufficient evidence to support a finding that the matter in question is what the proponent claims, namely the cellular telephone records, including text messages, belonging to a number separately identified as Blake's.

She identified Exhibit 40 as the records she retrieved from the company's network in response to the subpoena for that specific number. In addition, because Papke was able to testify that these records were recorded during regularly conducted activity, and the messages were stored and kept in the ordinary course of business, the records were properly admitted under the business records exception to the hearsay rule.

Blake claimed Exhibit 40 was not properly authenticated because neither Papke nor any other witness testified as to who “actually prepared, sent, or received the text messages such that the records indicate a lack of trustworthiness.”  State v. Blake, supra.  The court found that “this argument goes to the weight of the evidence rather than its admissibility.” State v. Blake, supra.  As the records were properly authenticated and admitted, the jury was free to believe or disbelieve Blake's defense that he was not the one sending the text messages. The jury heard and rejected this defense. Accordingly, there was no error, plain or otherwise, in the admission and authentication of Exhibit 40. State v. Blake, supra.

Finally, Blake argued that Exhibit 40 should “have been excluded” under Ohio Rule of Evidence 403(A), which states, in part, that otherwise admissible evidence is not admissible “if its probative value is substantially outweighed by the danger of unfair prejudice”.  State v. Blake, supra.  At trial, Blake’s lawyer objected to the admission of the exhibit on this basis, arguing that the records “as a whole were unduly prejudicial and inflammatory as there were several text messages that were not relevant to any material fact of the case and could encourage the jury to convict merely based on improper characterevidence.”  State v. Blake, supra.

The Court of Appeals carefully considered this issue, ultimately ruling against Blake:

[T]he authorship of the text messages detailed in Exhibit 40 was an issue in the case. Albert Givens and Detective Bush provided testimony connecting Blake to the cellular telephone number from which these records came. Both testified that Blake's number was the same as that in Exhibit 40. The text messages sent from that number were highly relevant as these messages showed a continuous sequence of events that occurred just prior to the shooting and in the days following the shooting.

Such messages made it more likely that all the text messages came from Blake. Finally, any possible prejudice presented by Exhibit 40 is diminished as Blake . . . did in fact cross-examine both Papke and Detective Bush regarding the fact that they could not state who in fact sent the text messages contained in Exhibit 40.

For this and other reasons, the Court of Appeals affirmed Blake’s conviction and sentence.  State v. Blake, supra.
Posted by Susan Brenner at 2:33 PM