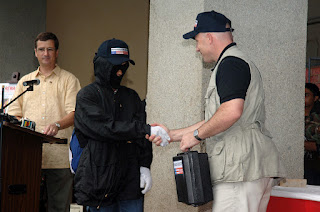 As the district court judge explains in the opinion in which he rules on Colon’s motion,

As part of a federal grand jury investigation into Colon and his associates, federal agents applied for a search warrant for the contents of Colon's Facebook account. U.S. v. Meregildo, supra.  A U.S. Magistrate Judge “found probable cause existed to obtain the contents of Colon's Facebook account and issued the warrant.” U.S. v. Meregildo, supra.

In his motion to suppress, Colon did “not contest the Magistrate Judge's finding of probable cause” to issue the warrant. U.S. v. Meregildo, supra.  Instead, he

In ruling on the motion, the district court judge who has the case explained that the 4th Amendment guarantees that

Generally, people have a reasonable expectation of privacy in the contents of their home computers. . . . But this expectation is not absolute, and may be extinguished when a computer user transmits information over the Internet or by e-mail. . . .

The judge noted that Facebook and other social media

present novel questions regarding their users' expectations of privacy. Facebook users may decide to keep their profiles completely private, share them only with `friends’ or more expansively with `friends of friends,’ or disseminate them to the public at large. . . . .

Whether the 4th Amendment precludes the Government from viewing a Facebook user's profile absent a showing of probable cause depends, inter alia, on the user's privacy settings.

He also explained that when “a social media user disseminates his postings and information to the public, they are not protected by the 5th Amendment” under Katz supra. U.S. v. Meregildo, supra. But “postings using more secure privacy settings reflect the user's intent to preserve information as private and may be constitutionally protected” under the Katz decision.  U.S. v. Meregildo, supra.

As I’ve noted in earlier posts, the Katz standard is basically an assumption of risk standard, i.e., if you knowingly expose information/evidence to others, you lose your 4th Amendment expectation of privacy in it.  Conversely, if you seek to preserve it as private, then the 4th Amendment protects it.

As to this case, the judge noted that

Colon maintained a Facebook profile in which he permitted his Facebook `friends’ to view a list of all of his other Facebook `friends,’ as well as messages and photographs that Colon and others posted to Colon's profile. . . .

By that means, the Government learned, inter alia, that Colon posted messages regarding prior acts of violence, threatened new violence to rival gang members, and sought to maintain the loyalties of other alleged members of Colon's gang. . . .

Access to Colon's Facebook profile formed the core of the Government's evidence of probable cause supporting its application for the search warrant.

allow viewership of postings by `friends,’ the Government may access them through a cooperating witness who is a “friend” without violating the 4th Amendment. . . . While Colon undoubtedly believed that his Facebook profile would not be shared with law enforcement, he had no justifiable expectation that his `friends’ would keep his profile private. . . .

And the wider his circle of `friends,’ the more likely Colon's posts would be viewed by someone he never expected to see them. Colon's legitimate expectation of privacy ended when he disseminated posts to his `friends’ because those `friends’ were free to use the information however they wanted -- including sharing it with the Government. . . .

When Colon posted to his Facebook profile and then shared those posts with his `friends,’ he did so at his peril. Because Colon surrendered his expectation of privacy, the Government did not violate the 4th Amendment when it accessed Colon's Facebook profile through a cooperating witness.

Colon also argued that the agents “did not employ any minimization procedure”.  U.S. v. Meregildo, supra.  The requirement of minimization originated with the interception of phone calls and applies to intercepting “wire, oral, or electronic communications.”  18 U.S.Code § 2518(5).  As this source explains,

Government wire interceptions must be conducted in a manner to minimize interceptions of communications not subject to interception. . . . Minimization embodies the constitutional requirement of avoiding, to the greatest extent possible, seizure of conversations which have no relation to the crimes being investigated or the purpose for which electronic surveillance has been authorized. . . .

Law enforcement personnel must exhibit a high regard for the right to privacy and do all they reasonably can to minimize interceptions of non-pertinent conversations. . . .

Here, the judge rejected Colon’s argument that the agents did not employ minimization procedures as “meritless.”  U.S. v. Meregildo, supra.

For instance, the Government sought to seize information related to the scheduling of meetings among members of the racketeering enterprise, drug trafficking activity, and weapons. . . . This description was sufficiently particular to allow the Government to examine the files it received from Facebook without violating the Fourth Amendment.