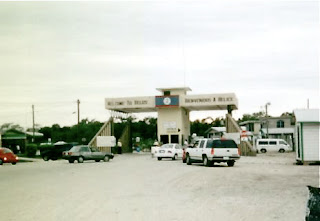 This post is another in a series of posts I’ve done that deal with Customs agents searching people's laptops at international borders.

As I've explained, so far most federal courts have held that the exception does apply to laptops and other electronic devices that store data. What this means in practice is that Customs officers can treat a laptop like a suitcase, i.e., they can open it up (turn it on) and look through its contents to see if they find anything that is illegal in and of itself (contraband) or anything the person otherwise shouldn’t be carrying across the border.

This post is about a case in which the officers’ reliance on the exception proved to be problematic, according to a U.S. Magistrate Judge: U.S. v. Cotterman, 2009 WL 465028 (U.S. District Court for the District of Arizona 2009). The case began on April 6, 2007 at 9:57 a.m., when Howard and Maureen Cotterman came to the Lukeville Port of Entry (POE) in Lukeville, Arizona seeking admission to the United States:

In primary [inspection], a Treasury Enforcement Communication System (`TECS’) hit was observed based on Mr. Cotterman's convictions for child sex crimes in 1992. Based on the TECS hit, the Cottermans were referred to secondary [inspection]. . . . [T]hey were told to exit the car, leave their belongings. . . . and wait in the small lobby at the POE. They were not handcuffed, but since they could not access their car, for pragmatic purposes they were not free to leave.

Two border inspectors searched the . . . car for one and a half to two hours. . . . [T]hey found . . . two laptop computers which they turned over to Agent Alvarado for inspection. . . .Agent Alvarez examined the . . . laptops, but was unable to discover any contraband. However, on one of the computers, certain files were password protected. Agent Alvarez then went on to attend to other duties.

The TECS hit was . . . assigned to . . . agent Riley. Riley and . . . Agent Brisbine traveled to Lukeville, arriving about 3:30 p.m. . . . Riley interviewed Mr. and Mrs. Cotterman separately. Mr. Cotterman offered to assist in accessing his computer, but Riley declined due to concerns [he] might . . . sabotage [it]. . . . Brisbine drove the laptop[s] . . . to Tucson, arriving between 10:30 p.m. and 11:00 p.m. He turned the[m] over to John Owen for forensic evaluation, which Owen began immediately. The Cottermans were finally allowed to leave Lukeville at approximately 6:00 p.m.

Owen continued the forensic examination on Saturday and Sunday. . . .On Sunday it was determined there was no contraband on Mrs. Cotterman's laptop. . . . [but] 75 images of child pornography were on Mr. Cotterman's laptop in unallocated space.

Mrs. Cotterman's laptop was returned Monday morning. However, a copy of the laptop was made by Owen and is still in his file. . . . Mr. Cotterman was asked to come to the Tucson ICE office and provide the passwords. [He said] he would have to call some business associates to get the password(s), and would be in later. . . . [O]n Monday, [he] boarded a plane for Mexico, ultimately traveling to. . .Australia. . . .

[B]efore she arrived in Lukeville [Riley] determined that . . . computers would be taken to Tucson for forensic evaluation. . . . Brisbine determined that `one way or another’ those computers were going to Tucson because ICE field guidelines required it. . . . Owen was at work in Tucson on April 6, 2007, and was notified at work sometime around lunch that the laptop computers would be brought in. He was not asked to travel to Lukeville.

Mr. Cotterman was apparently apprehended at some point and charged with a crime (presumably possessing child pornography), because he moved to suppress “all evidence seized from him by Customs Inspections at the Lukeville Point of Entry.” U.S. v. Cotterman, supra. The prosecution argued that the search of both laptops was a legitimate border search. U.S. v. Cotterman, supra. The federal magistrate judge who ruled on the motion found that this case differed in an important regard from the four prior border search of a laptop cases:

This case poses the question, can the government seize property at the border, move it far away from the border and hold the property for days, weeks or months without any heightened scrutiny? Under those circumstances, the law requires the Government to have reasonable suspicion before extending the search in both distance and time away from the border.

The government claimed this was not a nonroutine border search because it didn’t involve bodily intrusions (body cavity search) or damaging the Cottermans’ property. When the lawyers for the two sides were arguing the issue, the federal prosecutor “warned the Court that a time and distance restriction on border searches would be establishing new law”, which I assume the prosecutor indicated would be a bad idea on this judge’s part. U.S. v. Cotterman, supra.

The judge, though, found that an established rule of law – the extended border search doctrine – applies when agents search property long after it has been seized and at a place “away from the border.” Courts have held that since these searches represent “a greater intrusion on the person”, they must be based on reasonable suspicion of criminal activity. U.S. v. Cotterman, supra. The judge also noted that at some point

[t]he discrepancy in time and distance will become so great it is no longer an extended border search, thus requiring probable cause and a warrant. . . . [H]ad the forensic examiner in this case placed the Cottermans electronics equipment at the end of the queue, conducting the examination in a month or two, it could be argued the search was so removed in time as to no longer be an extended border search. We need not reach that question here, where the facts show reasonable diligence . . . in conducting the . . . examination. Therefore, the Government need only show reasonable suspicion. . . .

U.S. v. Cotterman, supra. As this judge explained, reasonable suspicion is less than probable cause. “Reasonable suspicion exists when an officer is aware of specific, articulable facts, which together with objective and reasonable inferences, form a basis for suspecting that the particular person to be detained has committed or is about to commit a crime.” U.S. v. Cotterman, supra.

[T[he TECS hit alone does not establish reasonable suspicion. The fact that password protection has innocent explanations does not necessarily negate this from being considered in determining reasonable suspicion. However, in this case, the additional fact of password protected files on Howard Cotterman's computer does not amount to reasonable suspicion for three reasons. First, it is undisputed that Howard Cotterman offered to open the files at the Lukeville port of entry. Second, the facts show that Officer Riley had determined that she was taking both laptops in for a forensic evaluation before she left Sells to travel to Lukeville. Third, perhaps most importantly, the customs officers also seized Mrs. Cotterman's laptop, which was not password protected.

The judge also found the agents’ intention to seize the laptops was based on ICE field guidelines, which tell agents they can copy, image or seize electronic media if a violation of the law is “immediately apparent” or if they want to have it examined by a technical expert. The judge found that the guidelines do not incorporate the 4th Amendment’s requirement of reasonable suspicion for nonroutine border searches, which makes them problematic in situations like this one.

Finally, the judge found the agents had no 4th Amendment justification for holding onto the copy of Mrs. Cotterman’s hard drive: “At the hearing [on the motion to suppress], Mr. Owen suggested some vague, speculative ways in which the hard drive could possibly, but apparently not actually, contain probative information. If there is probative information on the hard rive, seventeen months is more than enough time to determine that.” U.S. v. Cotterman, supra.

The federal magistrate judge therefore (i) granted Mr. Cotterman’s motion to suppress all of the evidence seized in the border stop and (ii) ordered the government to return the copy of Mrs. Cotterman’s hard drive and “retain no copy of it.” U.S. v. Cotterman, supra.
Posted by Susan Brenner at 6:15 AM

I find this decision heartening; I've been troubled for a long time by the seemingly unlimited rights to search that US Customs has been asserting. The US Customs office seems to be asserting a nearly unlimited right to search and seize property merely because an individual crossed an international border at some point, and it seems this brings it more in line with reason (something akin to the "Search incident to arrest" exception).

I agree with you.

This is a decision by a federal Magistrate Judge, which means it can be reviewed by (a) a federal district judge and (b) the Court of Appeals. (It could also be reviewed ultimately by the Supreme Court, but that's less likely.)

If it is reviewed by either or both courts, I hope they agree with this Magistrate, for the same reasons you cited.

What you fail to mention is that Howard Cotterman is a convicted, sex offender. His first conviction was also for child pornography. He served his sentence and is a registered Tier II sex offender in the State of California.

The post you've put up makes it seem as though he was a random tourist returning from a vacation when the reality is that Mr. Cotterman is a convicted felon, a sex offender and had failed register in Mexico (Under SORNA Registered sex offenders must be required to provide information about any place in which the sex offender is staying for 7 or more days.) The Customs folks had a few red flags that merited closer scrutiny of Mr. Cotterman, it seems.

Perhaps there is a better example of US Customs overreaching?

All I know about Cotterman is what the opinion told me, and I included the facts about his prior conviction, etc.

This is the only reported case I've seen in which a federal court found that Customs went too far in using the border search exception as the basis for searching laptops. If you're aware of a better one, please let me know.