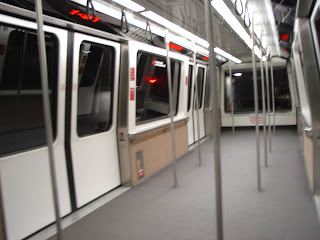 Faiz Al–Khayyal was charged with with “49 counts of sexual exploitation of children in violation of [Georgia Code] §16–12–100(b)(8)], based upon allegations that he possessed and controlled child pornography in the form of digital files on his laptop computer.” State v.  Al-Khayyal, 2013 WL 3037725 (Georgia Court of Appeals 2013).

As Wikipedia explains, “venue” refers to the “location where a case is heard.” As Wikipedia also notes, Article III § 2 of the U.S. Constitution addresses venue, stating that the “Trial of All Crimes . . . shall be held in the State” where the crimes were committed.  We will come back to venue, but first, the facts:

In 2009, while Al–Khayyal, a professor at the Georgia Institute of Technology, was abroad teaching in China, he became the target of an investigation into child pornography. When he returned to the United States on August 5, 2009, bringing his laptop computer, immigration control officers detained him in the Atlanta airport (in Clayton County) and seized that computer.

A forensic computer specialist for the Georgia Bureau of Investigation conducted a forensic examination of the computer, using specialized forensic software, and discovered 29 digital files that contained sexually explicit images of young girls. The files had been placed in the computer's trash folder, which had then been emptied, so the files were permanently deleted or `double-deleted’ and inaccessible to the user. A subsequent examination of the computer yielded 20 additional files that had been `deleted’ but remained saved in the trash folder.

Those files were in a compressed `.rar’ format, and the images contained in the files could be viewed only with an `uncompressing’ or `unzipping’ program that at that time was not loaded on the computer. A different unzipping program, however, was loaded on the computer, and [its] history files showed that the software had been used, though not on the files at issue in this case.

In addition, the computer specialist testified that the software required to access the .rar files is readily available to the public and can be used without special training. When the computer specialist used the required software to `rebuild’ the .rar files in the trash folder, she found that the files also contained sexually explicit images of young girls.

In his motion to dismiss, Al-Khayyal argued that although he “possessed the computer in Clayton County,” he “deleted the digital files before he entered the county and could no longer access” them and there was, therefore, no evidence that he committed the offenses as alleged in the indictment.” State v. Al-Khayyal, supra. The trial judge granted the motion because he found there was no evidence that Al-Khayyal “was in knowing possession and control of the images in Clayton County.” State v. Al-Khayyal, supra.

On appeal, the prosecution argued that the evidence proved that Al-Khayyal possessed

his computer in Clayton County . . .when the . . . .rar files were present on [its] hard drive. . . . [T]he State contends the evidence establishes that, although the subject files were then assigned to Al–Khayyal's computer's trash folder, he could have accessed the files and viewed the contraband images after downloading software that was readily available to the public.

Further, the State contends that the evidence supports an inference that Al–Khayyal knew the files were on his computer and he could later access them. Because questions concerning Al–Khayyal's knowledge and intent are for the jury to decide, the State contends that . . . the trial court erred in . . . granting his motion to dismiss the indictment.

Al-Khayyal argued, in response, that the trial judge’s ruling was correct because

while he was in Clayton County, he lacked the ability to access the illegal images stored on his computer. He contends that contraband that is in the form of electronic data `can only be thrown away in one way -- [by] rendering it inaccessible on the computer’ on which the data is stored.

He contends that, before entering Clayton County, he had done `everything he could to discard the [illegal] images and terminate his possession’ and the steps he had taken before he returned to the United States did, in fact, render the subject files `totally inaccessible.’ Based on this, he contends that the trial court correctly determined that, as a matter of law, he was not in knowing possession or control of the contraband in that venue.

`[u]nder Georgia law, a person who knowingly has direct physical control over a thing at a given time is in actual possession of it. A person who, though not in actual possession, knowingly has both the power and the intention at a given time to exercise dominion or control over a thing is then in constructive possession of it. In any criminal prosecution for possession, therefore, the State must prove that the defendant was aware he possessed the contraband at issue. . . . Barton v. State, 286 Ga. App. 49, 648 S.E.2d  (Georgia Court of Appeals 2007).

`Both knowledge and possession may be proved, like any other fact, by circumstantial evidence.’ . . . Hunt v. State, 303 Ga. App. 855, 695 S.E.2d 53 (Georgia Court of Appeals 2010). Further, `[a]s long as there is slight evidence of access, power, and intention to exercise control or dominion over an instrumentality, the question of fact regarding constructive possession remains within the domain of the trier of fact.’ . . . Hunt v. State, supra.

State v. Al-Khayyal, supra.  For more on actual possession versus constructive possession, check out this prior post.

The Court of Appeals then turned to child pornography, noting that the “common thread in child pornography laws” is “the visual depiction of minors engaged in sexually explicit conduct.”  State v. Al-Khayyal, supra.

[C]hild pornography presents special issues in contemporary times because technology allows images to be ephemerally generated from data stored in a variety of media. Georgia law . . . has evolved to reflect the impact of technology. Some offenses are narrowly drawn to prohibit specified conduct involving a `visual medium’ or `visual or printed matter’ which depicts a minor or a portion of a minor's body engaged in any sexually explicit conduct. The offense at issue in this case, on the other hand, is more broadly drawn to prohibit possession or control of `any material’ which depicts such an image. [Georgia Code] § 16–12–100(b)(8).

Georgia's appellate courts have upheld convictions under this subsection in cases based on the defendant's possession of a videotape, a compact disc, a DVD, or a USB flash drive that contained prohibited content. Thus, in these storage media cases, evidence that a defendant possessed data capable of generating images of a minor engaged in sexually explicit conduct authorized the jury to find that the defendant possessed prohibited `material’ even though actually viewing the prohibited images would require the use of a machine or electronic device (a videocassette player, a computer equipped with particular software, etc.).

The court also noted that “it is undisputed that Al–Khayyal physically possessed a computer that served as the storage medium for data files capable of generating visual depictions of minors engaged in sexually explicit conduct.”  State v. Al-Khayyal, supra. It also noted that

[d]espite his undisputed physical possession of the computer in Clayton County, Al–Khayyal contends the State cannot prove that he possessed the contraband at issue in that venue because, while he was in the county, he lacked the ability to access the illegal images stored on his computer. He relies in part on evidence that the software required to view the prohibited visual depictions was not loaded on his computer at the same time.

We find no support in Georgia law, however, for the proposition that possession of prohibited material under [Georgia Code] § 16–12–100(b)(8) exists only in conjunction with the defendant's present ability to view illegal visual depictions, especially given the evidence that the needed software was readily available to the public.

The court then took up Al-Khayyal’s final argument -- that “the evidence precludes the requisite finding that he possessed the contraband at issue knowingly, that is, that he was aware that the files containing the illegal images were stored in his computer's memory.”  State v. Al-Khayyal, supra (emphasis in the original). It noted that there

was no evidence presented at the hearing on Al–Khayyal's . . . and motion to dismiss that the type of files at issue in this case, .rar files, could have been saved to his hard drive automatically and without his knowledge. Rather, the evidence authorizes an inference that the .rar files originally came to be saved to Al–Khayyal's computer deliberately.

Evidence that he had used other unzipping software authorizes an inference that he knew about the kind of software needed to access and manipulate compressed files. In addition, all of this evidence must be viewed in light of Al–Khayyal's educational background and professional expertise.

[t]aking these permissible inferences together, we conclude the evidence does not establish as a matter of law that, while Al–Khayyal possessed his computer in Clayton County, he had no knowledge of the presence of the .rar files in his computer's trash folder. Under the facts presented, the question of whether [his] efforts to abandon the illegal files were successful remains a question of fact for the jury and cannot be determined as a matter of law at this pretrial stage.

Bearing in mind that knowledge and possession may be proved by circumstantial evidence and that slight evidence of access, power, and intention to exercise control or dominion over contraband is sufficient to create a jury issue, the record does not support a finding that it will be impossible for the State to prove that Al–Khayyal committed the offenses in Clayton County, as alleged in the indictment.

The Court of Appeals therefore held that the trial judge erred in granting Al-Khayyal’s motion to dismiss and therefore reversed that ruling and remanded the case for further proceedings.  State v. Al-Khayyal, supra.

You can, if you are interested, read more about the facts in the case and see a photo of Al-Khayyal in the news story you can find here.
Posted by Susan Brenner at 8:15 AM