Unauthorized Access, Using a Computer to Commit a Crime and Obstruction of Justice 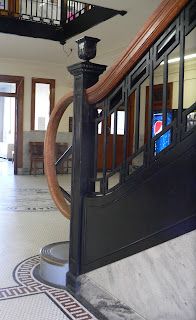 In this opinion, the Michigan Court of Appeals is ruling on the prosecution’s appealing the trial judge’s dismissal of the charges.  People v. Greene, supra.  The court began its opinion by noting that the case arose from an incident that

occurred at the 22nd District Court in Inkster, involving [Greene], a court officer at that court, who allegedly accessed city attorney Milton Spokojny's email account from [his] work computer and printed a sensitive document that was sent to that account. The document was a defense-strategy memorandum pertaining to a lawsuit in which the city of Inkster was a defendant and Kevin Smith, an employee of the city, was the plaintiff.

The prosecution contended that [Greene] transmitted the document to codefendant Ronald Wade, who in turn delivered it to Smith.

where there is `evidence sufficient to cause a person of ordinary prudence and caution to conscientiously entertain a reasonable belief of the accused's guilt. . . . [A] showing of probable cause may stop short of proof beyond a reasonable doubt, and evidence that leaves some doubt may yet demonstrate probable cause.’ People v. Justice, 454 Mich. 344; 562 N.W.2d 652 (Michigan Supreme Court 1997).
People v. Greene, supra.

It began its analysis of the specific offenses with common-law obstruction of justice, noting that obstruction of justice involves “`interference with the orderly administration of justice’”.  People v. Greene, supra (quoting People v. Thomas, 438 Mich. 448, 475 N.W.2d 288 (Michigan Supreme Court 1991)).  The prosecution argued that Greene’s conduct constituted common-law obstruction because it “falls under one of Blackstone's categories: `officious intermeddling in a suit that no way belongs to one, by maintaining or assisting either party with money or otherwise.’” People v. Greene, supra (quoting People v. Thomas, supra.)

involved Kevin Smith (the plaintiff) and the city of Inkster. It is undisputed that [Greene] was not involved in [it]. Evidence was presented showing that a defense-strategy memorandum was printed from [his] computer and that [he[ distributed that memo to Wade, who distributed [it] to Smith. Judge Sylvia James, of the 22nd District Court, testified [Greene] told her he printed the document. Further, a forensic examination of [his] computer revealed someone with the username `ofcmgreene’ . . . logged onto `LPPolice.com’ and searched for the name `Kevin Smith.’

This occurred about 80 minutes before the user spent 45 minutes viewing, printing, and saving documents from Spokojny's email account. Because the `ofcmgreene’ username can fairly be attributed to defendant, it can be inferred from this evidence that it was [him] who was using the computer during the timeframe at issue.

Further, Judge James testified [Greene] told her he shared the printed `email’ with Wade. It can be inferred from the evidence that [he] gave the document to Wade to assist Smith because it appears he was doing research about Smith relatively close to the time the document was printed.

Based on the evidence, a person of ordinary prudence could reasonably believe [Greene’s] actions were for the purpose of intermeddling in the lawsuit by assisting Smith, i.e., by providing this sensitive defense-strategy document. Thus, a reasonably prudent person could find that the elements of Blackstone's category of obstruction of justice were present.

The Court of Appeals next addressed the misconduct in office charge, noting it involves

merely printed a document that appeared on his own computer because it contained his name and that he shared that document with Wade; he argues this did not constitute corrupt behavior. However, while [Greene’s] act of printing a document from his own computer and giving the document to Wade may have been a lawful act, because there is evidence that [he] did not have the authority to access Spokojny's email account and was accessing Spokojny's email account for 45 minutes, there is evidence that the allegedly lawful act was done in a wrongful manner. People v. Milton, supra.

Further, because of the evidence that someone with the username `ofcmgreene’ logged onto LPPolice.com and searched for the name `Kevin Smith,’ it can be inferred that [Greene] engaged in these actions to give Smith an unfair advantage in his lawsuit.

The court noted that other courts have found that “corruption” involves “taint”, and taint has been defined, among other things as to “`affect slightly for the worse.’’  People v. Greene, supra (quoting Black’s Law Dictionary (9th 3d)).  It therefore found that “[i]t It can be inferred from the evidence that [Greene] intended to taint the lawsuit by giving Smith an unfair advantage.”  People v. Greene, supra.  The Court of Appeals also found that Greene “acted under the color of office” because he

printed the document from his work computer, and the document was accessible on this computer because it was a court computer used by Spokojny with [Greene’s] permission. Therefore, there was probable cause to believe that but for [his] position as a court officer, he would not have had the opportunity to access the document.

The court then took up the using a computer to commit a crime charge.  People v. Greene, supra.  Michigan law makes it a crime to use a “computer program, computer, computer system, or computer network to commit, attempt to commit, conspire to commit, or solicit another person to commit a crime’”.  Michigan Compiled Laws § 752.796(1).  The court found there was probable cause to believe Greene committed obstruction of justice and “probable cause . . . to believe [he] used a computer in doing so.” People v. Greene, supra.

Finally, the Court of Appeals addressed the unauthorized use of a computer charge.  People v. Greene, supra.  The charge was brought under Michigan Compiled Laws § 752.795(a), which states that a person shall not intentionally and

People v. Greene, supra.  Another statute defines “computer program” as “a series of internal or external instructions communicated in a form acceptable to a computer that directs the functioning of a computer, computer system, or computer network in a manner designed to provide or produce products or results from the computer, computer system, or computer network.” Michigan Compiled Laws § 752.792(5).

The Court of Appeals noted that the trial judge “found that the elements of intent and lack of authorization were not met in this case because `if anybody had come by and touched that mouse or keyboard, they would have seen that document. . . . It was an accident.’” People v. Greene, supra.  In a footnote, it explained that the premise of the judge’s finding was that “the document was up on [Greene’s] computer screen and that [he] simply saw the document when he moved his mouse.” People v. Greene, supra.

The Court of Appeals did not agree with the trial judge on this issue, either:

[I]t is not clear from the evidence . . . whether this is actually how [Greene] came across the document. To the contrary, there was evidence presented . . . suggesting that [he] spent 45 minutes looking inside Spokojny's email account and that documents were viewed, saved, and printed from the email account during this time.

This evidence suggests that the document did not just inadvertently pop up on the screen when [Greene] moved the mouse but that, instead, [he] intentionally searched through Spokojny's email account, ostensibly for the document.

The language in the `computer program’ definition encompasses the AOL website from which Spokojny's email account was accessed. . . . In addition, the language `a set of related, connected or unconnected, computer equipment, devices, software, or hardware’ in the definition of `computer system’ is broad enough to encompass AOL's server, which communicated with [Greene’s] computer to create access to the AOL website and Spokojny's email account on [Greene’s] computer. . . .

The court therefore found that the “evidence presented was sufficient to establish probable cause to believe [Greene] intentionally and without authorization accessed a computer program and computer system to acquire the document at issue or, more generally, to use the service of Spokojny's email account.” People v. Greene, supra.

So it reversed the order dismissing the charges and remanded to the trial court for further proceedings.  People v. Greene, supra.  If you would like to read a little more about the facts in the case, check out the news story you can find here.