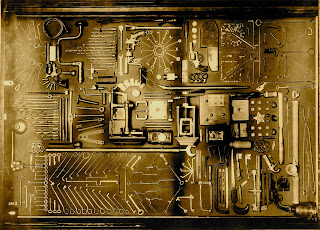 As I noted in a post I did some years ago, many (if not all?) U.S. states outlaw the possession of “burglar’s tools” . . . on the premise that possessing burglar’s tools is basically a step toward committing the crime of burglary.

As I explained in that post, these statutes are predicated on the same rational the law uses to criminalize an attempt to commit a crime, e.g., that by preparing to commit the crime you have demonstrated that you are “dangerous”.  Since you have, inferentially, demonstrated that you are dangerous, so the theory goes, it is better to let law enforcement arrest you before you commit the crime and charge you with the lesser offense of attempt . . . rather than having to stand around and wait until you commit burglary, homicide or whatever.

This post is in a sense a follow-up to the burglar’s tools post.  I very recently discovered that the state of Ohio has what seems to be a similar, but much broader statute.  Section 2923.24(A) of the Ohio Revised Code states that “[n]o person shall possess or have under the person's control any substance, device, instrument, or article, with purpose to use it criminally.”  Section 2923.24(B)(2) is one of several sections that define what “constitutes prima-facie evidence of criminal purpose” under § 2923.24(A).  Specifically, § 2923.24(B)(2) says the “[p]ossession or control of any substance, device, instrument, or article designed or specially adapted for criminal use” constitutes such evidence.

That brings us to Joseph Bates, whom an Ohio jury convicted of “numerous offenses including identity fraud, menacing by stalking, and possessing criminal tools.”  State v. Bates, 2013 WL 1289720 (Ohio Court of Appeals 2013).  After he was sentenced to “a four-year term of community control”, Bates appealed.  State v. Bates, supra.

Basically, the charges arose from a relationship gone awry:  The opinion says Bates met June Fry in 2005, at an auction, and developed a very close relationship . . . which “began to deteriorate [by mid-summer 2008] as a result of frequent disagreements.” State v. Bates, supra.  The opinion also notes that “[s]oon after the relationship started `slowing down,’ June fell victim to a number of unfortunate events”, which included “prank phone calls” from a phone number June suspected belonged to Bates.  State v. Bates, supra.

“In addition to the prank phone calls, June noticed a three-inch spike in one of her tires on her personal vehicle on the morning of November 1, 2008” and when she went on a short trip a month later, an outside faucet at her home had been sabotaged, which resulted in the destruction of the pump that fed the faucet.  State v. Bates, supra.  There were other, similar “pranks”, including anonymous reports of health code violations about her business, which interfered with June’s ability to operate normally.  State v. Bates, supra.

While these events were taking place, June and [her daughter] Megan began to receive multiple mailings, telephone calls, and emails from firms that were responding to requests for services that were made on behalf of June and Megan using their personal information. June and Megan . . . were not involved in making the requests, nor did they authorize anyone, including Bates, to make the requests for them.

These communications came from law firms, debt relief agencies, colleges, magazines, and even adult entertainment firms. Upon further investigation, June discovered that the IP address from the computer that requested these services was visible on some of the emails. She subsequently reported these events to the police.

The police subpoenaed the name under which the IP address was registered. Pursuant to that subpoena, the police were informed by an internet service provider that the IP address on the emails came from Bates' Gateway laptop computer. Consequently, the Bowling Green Municipal Court issued a search warrant for Bates' laptop.

After securing the laptop, Deputy Steven Mueller searched [it] and discovered it was used to visit numerous websites matching the emails June received. In addition, Mueller's search of the computer's internet browsing history revealed that Bates had searched for health departments and information about June and Megan, prank calls, and how to hide an IP address.

On appeal, Bates argued that his conviction for possessing criminal tools – i.e., the laptop – was “not supported by sufficient evidence”.  State v. Bates, supra. In other words, he claimed the evidence presented by the prosecution did not prove beyond a reasonable doubt that he committed the crime of possessing criminal tools by having his laptop in his possession.  State v. Bates, supra. For more on what is involved in making that argument, check out this source.

The argument arises from what the prosecution has to prove to convict someone of this crime.  The model Ohio Jury Instruction on this offense tells jurors that

[t]he defendant is charged with possessing criminal tools. Before you can find the defendant guilty, you must find beyond a reasonable doubt that on or about the day of , , and in County, Ohio, the defendant (possessed) (had under his/her control) a (substance) (device) (instrument) (article) with purpose to use it criminally.

The Court of Appeals did not buy Bates’ argument:

Before I comment on the possessing criminal tools offense, as applied to technology, I need to note the other Ohio case I found that also involves such a conviction.  In State v. Barnett, 2012 WL 3553623 (Ohio Court of Appeals 2012), Christofer Eugene Barnett was convicted of several counts of importuning a child to engage in sexual activity, attempted importuning and possessing criminal tools, and appealed his conviction.  State v. Barnett, supra.

Beach saved the texts and the photo Barnett sent of himself, which Beach was able to identify; Beach also subpoenaed Verizon “to preserve the text messages.” State v. Barnett, supra.  The messages solicited the recipient, whom Barnett presumably believed was the nine-year-old girl, to engage in various sex acts.  State v. Barnett, supra.

Like Bates, Barnett argued, on appeal, that his conviction for possessing criminal tools was not supported by evidence sufficient to prove the elements of the crime beyond a reasonable doubt.  State v. Barnett, supra.  Like the Bates court, this Court of Appeals did not agree:

Aside from the testimony concerning the text messages sent to the alleged minor's cell phone, Detective Beach testified that law enforcement seized a cell phone from Barnett during his arrest that matched the phone number of the person texting the alleged minor.

There are a number of similar convictions in Ohio, some involving computers, others involving cell phones.  The issue I wondered about is whether it is reasonable to treat either as a “substance, device, instrument, or article designed or specially adapted for criminal use”, as defined by Ohio Revised Code § 2923.24(B)(2).

It looks like the “designed or specially adapted for criminal use” language comes from or is based upon language in statutes that make it a crime to possess burglar’s tools.

The Maine provision on that crime, for example, says someone is guilty of possessing burglar’s tools if that person

[p]ossesses . . . any tool, implement, instrument or other article that is adapted, designed or commonly used for advancing or facilitating crimes involving unlawful entry into property or crimes involving forcible breaking of safes or other containers or depositories of property, including, but not limited to, an electronic device used as a code grabber or a master key designed to fit more than one lock, with intent to use such tool, implement, instrument or other article to commit any such criminal offense. . . .

What bothered me when I read the Bates case, and then the Barnett case is whether it is reasonable to at least implicitly assume that a laptop computer and/or a cell phone is actually a device “designed or specially adapted for criminal use”.  It seems to me, and I could be wrong, that laptops and cell phones are designed and/or specially adapted for more general, and generally lawful, uses.

If I am right about that, then it seems that these statutes and/or their accompanying definitions of “criminal tools” need to be revised to narrow the definitions so they more narrowly target the items at issue.  Otherwise, and again I could be wrong, it seems as if a prosecutor could add the possessing criminal tools charge to ANY case in which the defendant used a cell phone or a laptop . . . and, who knows?, maybe add two counts of violating the statute if someone used BOTH a cell phone and a laptop in committing the crime.  Alternatively, it would also seem to assume that, if a prosecutor were so inclined, he/she could prosecute someone for merely possessing a computer or a cell phone . . . on the premise that either/both constitutes a criminal tool under the Ohio statute cited above.