The U.S. Marshal, the “Debacle” and the 4th Amendment 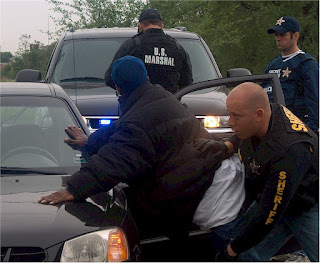 Section 242 makes it a federal crime for a state actor to violate someone’s civil rights “on account of such person being an alien, or by reason of his color, or race”.  Section 1512(b)(3) makes it a federal crime to “hinder, delay, or prevent the communication to a law enforcement officer or judge of the United States of information relating to the commission or possible commission of a Federal offense”.

The press release you can find here says the charges are based on Linder’s “punching and choking a handcuffed man on July 8, 2010, and . . . attempting to persuade another law enforcement officer to withhold evidence of the assault.”

Linder sought to suppress “information that was obtained by the government from a search of his Blackberry smart device and the electronic files contained on the government server.”  U.S. v. Linder, supra.  I’m going to do my best to summarize the facts that are relevant to his motion.  According to the opinion, in the 2010 incident,

another officer confronted Linder immediately after the assault. According to the government, in an attempt to placate that officer Linder sent him a series of instant messages from his government-issued Blackberry smart phone. On July 16, 2010, the Office of Internal Investigation referred the incident to the Office of the Inspector General of the Department of Justice (`OIG’), and ten days later the OIG confirmed that it would handle the investigation into the matter.

Special Agent Kevin Shirley of the OIG Chicago Field Office began to participate in the investigation of Linder. On September 27, 2010, . . . Linder was directed into his supervisor's office where he was ordered to turn over his government-issued Blackberry.

Immediately thereafter Shirley sent Linder's Blackberry to the OIG Dallas Field Office for forensic testing and analysis. The Dallas office received the Blackberry on September 30, 2010. Shirley instructed the forensic examiner that the smart phone contained evidence of an assault committed by Linder on a civilian.

Also, on August 16, 2010, Shirley . . . requested Linder's emails that were stored on the government server from July 1, 2010 through August 21, 2010. On March 21, 2011, the OIG renewed its request for copies of Linder's emails on the server from June 23, 2010 through that date because it appeared some emails were missing. The OIG also received, without a specific request, a copy of documents and other computer files that Linder chose to place on the government server when it received a copy of Linder's emails.

Agents did not inspect each and every document, but instead used the alleged victim's last name as a search term to find relevant documents. That search brought up a document entitled `debacle.’

Upon initial inspection, the file, which was not password protected, appeared to be Linder's own first-hand account of the events that form that basis of Counts One and Two of the Indictment. In an abundance of caution, the government agents stopped reading the document and sent it to a taint team for review.

To this day the prosecution team, comprising the Assistant U.S. Attorney . . . as well as those members of the trial team acting under his direction, state that it has not read an un-redacted copy of the `debacle’ file. During the investigation the government did not inspect Linder's government-issued computer, and therefore never recovered any data that was saved exclusively on his hard drive. The only computer files searched were retrieved from the government servers.

As Wikipedia notes and as I have explained in earlier posts, in Katz v. United States, 389 U.S.347 (1967), the Supreme Court has held that a 4th Amendment “search” occurs when the government intrudes into an area or thing in which the owner had a actual subjective expectation of privacy that society is willing to accept as objectively reasonable.

The judge who has this case began her analysis by noting that “[i]f the government's conduct does not violate a . . . reasonable expectation of privacy, it does not constitute a 4th Amendment search and . . . no warrant is required.”  She also noted that public employees can have 4th Amendment rights in their workplace, but a public employee’s

4th Amendment rights . . . can be diminished by the practices and policies of the workplace . . . . In Ontario v. Quon,130 S.Ct. 2619, (2010), the Supreme Court held that `employers’ policies concerning communications  will . . . shape the reasonable expectations of their employees, especially to the extent such policies are clearly communicated.’ . . .

The judge explained that courts have held that government employees do not have “a reasonable expectation of privacy in information stored on their computers when the employee is notified that their employer has retained the right to access or inspect the information stored there.”   U.S. v. Linder, supra.  She noted that the U.S. Department of Justice and the U.S. Marshals Service had implemented policies that notified employees they had “no expectation of privacy” when they access either’s computer systems.  U.S. v. Linder, supra.  The U.S. Marshal Service’s Internet Usage Policies and Monitoring, for example, states in part that

Linda said he believed “his use of the [government-issued] devices” was private because
“he kept personal videos and pictures of his friends and family on his Blackberry and when he was ordered to give it to investigators he expressed a desire to retain the personal data on it.” U.S. v. Linder, supra.  The judge found that keeping

personal pictures on his Blackberry and showing a reluctance to surrender it . . . does not establish that Linder subjectively believed the data stored on his Blackberry was private. No evidence has been presented . . . to support the conclusion that Linder did not believe the warnings and policies he accepted informing him that he did not have a reasonable expectation of privacy in accessing and using the government's computer network system.

Linder also claimed he thought the data he stored on the government server was private.  U.S. v. Linder, supra.  He had access to “at least two servers, an S drive, for shared files and information, and an H drive for personal use” and claimed “his use of the H drive was for purely personal use”, so he had “a reasonable subjective expectation of privacy in the files contained there.”  U.S. v. Linder, supra.  The judge did not buy the argument:

Though Linder may have believed he had a reasonable expectation of privacy in the H drive, he has not supplied an affidavit to support that allegation. Because Linder has the burden of proving he had a legitimate expectation of privacy he must submit an affidavit to support his allegation that he had such a privacy interest in the H drive in order for the Court to grant a suppression hearing on the issue. . . .

Linder has not done that. [He] provides no evidence to support his claim, and . . . the USMS IT manuals and policies clearly state that employees have no reasonable expectation of privacy in their use of government computer systems, which the Court concludes includes the H drive. Indeed, in his Motion to Suppress Linder admits that he `erroneously’ believed the H drive was a private space to store personal data.

[I]t is the explicit and clearly expressed policy of the USMS that if its employees wish to retain privacy in their personal data they should refrain from using the USMS network. . . . Linder did not take any measures that manifest an intention to keep his documents private, such as saving materials on his hard drive or password-protecting his documents. . . [T]he `debacle’ file, was not password-protected. Rather, Linder placed his documents on the government server where they could be easily accessed. . . . The fact Linder's documents were stored on the server meant they could be accessed readily and without detection by others.

The judge noted that, “[a]ssuming arguendo that Linder sincerely believed his use of his government-issued Blackberry and the government server were private, he must still overcome the hurdle that this expectation of privacy is one that society is prepared to recognize as reasonable.” U.S. v. Linder, supra.  The court found that

[f]ederal law enforcement officials' use of public resources is not private for compelling reasons: as a federal law enforcement officer, Linder's electronic data is potentially discoverable for any pending case or it may be compelled to be disclosed pursuant to a request under the Freedom of Information Act. . . . Any privacy interest Linder may have subjectively believed he had in his Blackberry and files stored on the government server is not a privacy interest that society is prepared to recognize as reasonable. . . .

For these and other reasons, the judge denied Linder’s motion to suppress.  U.S. v. Linder, supra.
Posted by Susan Brenner at 2:10 PM

How does someone get hired as a US Marshal and do things this idiot has done. Why isn't he in JAIL??? After a federal grand jury returned a four-count indictment charging Stephen Linder, a Deputy U.S. Marshal, with two counts of violating 18 U.S. Code § 242 and two counts of violating 18 U.S. Code § 1512(b)(3), he moved to suppress certain evidence. U.S. v. Linder, 2012 WL 3264924 (U.S. District Court for the Northern District of Illinois 2012).
Hear is an example of a guy who thinks he is above the law

This guy is a creep. I hope justice is served in this case. I'd like to know how many time Mr Linder wasn't caught.

case was dismissed, DOJ Misconduct. Case was garbage to begin with it looks like