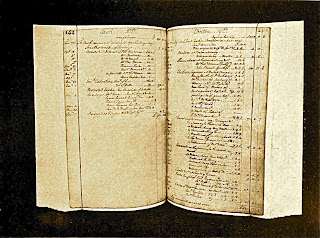 Powell worked as a

bookkeeper for Rocky Mountain Pump Services (RMPS) from March 2005 to February 2007, when her employment was terminated. During that period, RMPS's primary officers and managers were Bradley Nelson, the project manager, Chad Federer, the construction foreman, Nick Hartsook, the office manager, and Jerry Krotz, the service manager. RMPS was in the business of constructing and maintaining gas stations, truck stops, and similar facilities.

After RMPS terminated Powell’s employment, it contracted with Melanie Field to

handle the company's books until another bookkeeper could be hired. Field immediately found the books to be incomplete, inaccurate, and in need of `rebuilding.’

Painstaking reconstruction of the books, back to the time when [Powell] was hired, revealed numerous discrepancies and missing records, with multiple paychecks to [her] for the same pay period, copies of checks made payable to [Powell] where the computer QuickBooks system showed those checks being paid to vendors, and a few checks made payable to [her] where the issuing manager's signature appeared to be forged.

of the books was followed by a law enforcement investigation that included a review of [Powell’s] personal bank account records. Eventually, it was determined that 93 checks, totaling $78,200, and claimed to be `unauthorized’ by RMPS, had been deposited into [Powell’s] personal account during her tenure as RMPS's bookkeeper.

Of those checks, 86 were issued by Hartsook, and seven bore Nelson's signature.

went awry when the State decided to charge her with larceny. To understand why this is so, one must look at Wyoming's statutory scheme in regard to theft offenses.

The court explained there “are three separate crimes” that were relevant to the issues in this case, the first being “the `historic’ crime of larceny” codified at Wyoming Statutes § 6-3-402(a), which states that “[a] person who steals, takes and carries, leads or drives away property of another with intent to deprive the owner or lawful possessor is guilty of larceny.”  Powell v. State, supra.  It noted that to convict someone of this offense, the prosecution must prove a “taking” and “carrying” of property that was “`trespassory,’ meaning that it must be without the owner's consent.”  Powell v. State, supra.

The second form of larceny the court identified as relevant “is `larceny by a bailee,’ which Wyoming Statutes § 6-3-402(b) defines as follows:

A bailee . . . or any person entrusted with the control, care or custody of any money or other property who, with intent to steal or to deprive the owner of the property, converts the property to his own or another's use is guilty of larceny.

The court noted that the “material elements of larceny by a bailee for purposes of our present discussion are that the defendant have custody or possession of the property with consent, and that, while in such possession, the defendant converts the property to his own or another's use.”  Powell v. State, supra. It also noted that the  “crime of larceny by a bailee is similar to the common law crime of embezzlement.” Powell v. State, supra.

The third form of larceny the court found relevant to the issues in this case is “obtaining property by false pretenses,” which is codified in Wyoming Statutes § 6-3-407(a). Powell v. State, supra.  That statute states that a “`person who knowingly obtains property from another person by false pretenses with intent to defraud the person is guilty of [a felony or misdemeanor, depending upon the amount obtained].’”  Powell v. State, supra (quoting Wyoming Statutes § 6-3-407(a)).

The Supreme Court explained that the

The then explained that the essential elements of these three crimes

can be described as follows. Larceny requires a trespassory non-consensual taking, and the thief obtains neither title nor the right to possession. Larceny by a bailee does not require a trespassory taking; instead, a thief who is in rightful possession of property unlawfully converts it to his own or another's use, without thereby obtaining title to the property.

The Supreme Court then explained that it

is hard to identify the State's larceny theory in this case. In the Information, it is alleged that [Powell] `did unlawfully take money.’ The Affidavit of Probable Cause attached to the Information says that she `issu[ed] unauthorized checks to herself.’

The State's proposed elements instruction, which instruction was accepted and given to the jury, alleges that [Powell] `took money. During voir dire, the prosecutor described the crime being charged as follows:

`I bring that up because sometimes you might have heard throughout your experiences in life the word embezzlement and kind of may have a form of what that is. Embezzlement is what some other places call it when you steal from an employer. In Wyoming it is called larceny. It is the same as if you steal from a stranger or if you steal from anybody else. That's all lumped into one prong that's being accused here.’

`So I don't want you to be confused of why didn't we charge embezzlement versus larceny. It is the same thing in Wyoming.’

The court also pointed out that this statement

does not accurately reflect the actual state of the three separate statutory theft offenses discussed herein, and `steal’ is not a word that even appears in the elements instructions. Repeatedly during both his opening statement and his closing argument, the prosecutor said the case was about `documents and deception.’

Also during closing argument, the prosecutor summed up the State's burden as follows: `If just one check over a thousand you believe she was not legally entitled to, she took that money with the intent to deprive someone, beyond a reasonable doubt, then that's enough.’

The Supreme Court pointed out that the

fatal flaw in the State's case is that it produced no evidence whatsoever of a trespassory taking. The checks were not `issued by [Powell] without the owners' consent. Instead, the checks were issued by the owners and given to [Powell] for the purpose, or for the payee, stated on the check.

Possession of and title to both the check and the money represented by the check passed with the consent of the owners, even though, accepting the State's evidence as true, [Powell] deceived them as to the validity of the check's purpose.

And while Nelson testified that his `signature’ on several of the checks did not look like his signature, suggesting that the signature was forged, the State inexplicably made no attempt beyond Nelson's generalized statement, to prove that the signatures were actually forged, or that it was [Powell] who forged them.

The court noted that the prosecution did prove that Powell

altered the company's computer bookkeeping system to `cover her tracks’ in regard to the checks issued to her under false pretenses. If a check allegedly was a paycheck, she would create a fictitious pay period in the books. On other checks that were made payable to her, she would enter the payee into the bookkeeping system as a particular vendor.

But in no instance did the State prove that, without authority, [Powell] issued herself a check without authorization from one of the company managers. She did not `take’ the checks under the historical definition of that word in the context of larceny. Rather, the checks were `given’ to her under the mistaken belief that the money represented by the checks was due [to her.]

was charged with larceny, which crime as defined in the Wyoming Statutes, requires a trespassory taking in the common law sense. The State did not prove that element of the crime; therefore, we reverse.

For a news story that provides a little more of the facts in the case, including the impact on the company and some reader comments that are very sympathetic to Powell, check out this source.
Posted by Susan Brenner at 10:07 AM