The Scrap Materials, Hearsay and Dealing in Stolen Property 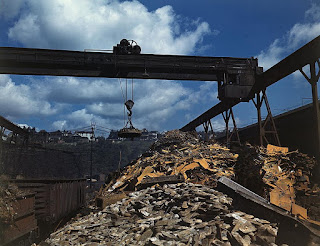 This post examines a recent decision from the District Court of Appeals of Florida – Second District: North v. State, 2017 WL 2484944. The court begins by explaining that Shane North was “convicted in the Circuit Court, Polk County . . . of dealing in stolen property and he appealed. North v. State, supra.
The Court of Appeals goes on to explain that
Mr. North was a foreman involved in a dismantling project for a shuttered power plant, a job which entailed removing copper cables, electrical bus bars, rectifiers, and batteries—materials that, even when scrapped, apparently hold significant resale value. His company's policy prohibited employees from taking or selling these decommissioned materials; instead, a designated scrap vendor was supposed to remove the materials from the job site. When Mr. North's company truck's GPS tracking device indicated that his truck had traveled to a metal recycling facility during working hours, the company became suspicious and commenced an investigation into Mr. North's activities. As a result of that investigation, it was determined that Mr. North had transported and sold nearly four tons of the power plant's scrapped materials to a recycling facility by representing to the facility that the scrap belonged to him. He was arrested and charged shortly afterward.

Mr. North initially elected to testify at his trial. But before he took the stand, the circuit court engaged in a colloquy with defense counsel concerning the scope and nature of the defendant's anticipated testimony. The court remarked that Mr. North's prospective testimony, in which he intended to describe the contents of purported email messages he claimed to have received from his supervisors granting him permission to sell the scrap, appeared to the court to be inadmissible hearsay. Defense counsel argued that the statements would not be hearsay because they went to Mr. North's state of mind—that is, prior to him selling the material at the recycling facility, Mr. North's understanding, based upon these emails, was that he had permission from both the scrap vendor and his construction manager to take the materials for himself. The circuit court remained unconvinced and ruled that the testimony was inadmissible hearsay. His testimony thus excluded, Mr. North did not testify and, following the jury's guilty verdict, was adjudicated and sentenced to thirty months in prison concurrently on each charge. He now timely appeals.
North v. State, supra.
The Court of Appeals then began its analysis of the issue in the case, explaining that
[g]enerally speaking, a trial court's ruling on the admission of evidence will not be reversed unless an abuse of discretion is demonstrated, Armstrong v. State, 73 So.3d 155, 166 (Florida Supreme Court 2011), but `the question of whether a statement is hearsay is a matter of law and is subject to de novo review on appeal,’ Cannon v. State, 180 So.3d 1023, 1037 (Florida Supreme Court 2015) (citing Burkey v. State, 922 So.2d 1033, 1035 (Fla. 4th DCA 2006)). Mr. North's appeal concerns the characterization of alleged email statements he claims to have received from third parties, evidence the circuit court believed was hearsay. In the context here, that was an erroneous characterization.
North v. State, supra.
The opinion goes on to explain that
[h]earsay, the Florida Evidence Code tells us, `is a statement, other than one made by the declarant while testifying at the trial or hearing, offered in evidence to prove the truth of the matter asserted.’ § 90.801(1)(c), Fla. Stat. (2013) (emphasis added). Certain out-of-court statements `may be offered for a multitude of purposes other than to prove the truth of the facts asserted in them.’ Massey v. State, 109 So.3d 324, 328 (Fla. 4th DCA 2013). Thus, an out-of-court statement may be admissible to establish the material effect that statement had on a listener—regardless of whether that statement was true or not—for `[w]hen a statement is offered to prove what a person thought after the person heard the statement, it is being offered to prove the person's state of mind and is not hearsay.’ Jenkins v. State, 189 So.3d 866, 869 (Fla. 4th DCA 2015); see also Miller v. State, 870 So.2d 15, 17 (Fla. 2d DCA 2003) (concluding that defendant's testimony that a deputy told him `Stop or I'll shoot’ was not hearsay because it was not offered to prove that the deputy intended to shoot the defendant, but rather what the effect of hearing that statement had on the defendant to explain his subsequent conduct).

In that light, the alleged email statements concerning Mr. North's permission to sell the scrap were simply not hearsay. See Buchanan v. State, 743 So.2d 59, 61 (Fla. 2d DCA 1999) (holding that trial court erred in excluding as hearsay proffered statements that defendant accused of theft had been told by a woman to retrieve her property, as the testimony was not presented for the truth of the matter asserted but rather to show that the defendant lacked the necessary intent to steal the property); White v. State, 993 So.2d 611, 613 (Fla. 1st DCA 2008) (`The testimony proffered by appellant was not hearsay because it was not offered ‘to prove the truth of the matter asserted’—that appellant's neighbor had been given the generator in return for work done . . . [but] was, instead, offered to negate an essential element of both offenses—intent.’); Alfaro v. State, 837 So.2d 429, 432–33 (Fla. 4th DCA 2002) (holding improper the exclusion of alleged out-of-court statement of permission for an alleged car thief to drive the purportedly stolen vehicle
North v. State, supra.
The Court of Appeals then begins the process of articulating its ruling on the Circuit Court Judge’s barring North’s testimony at trial, explaining that
[t]o be sure, our court has held that section 812.091(1) is a general intent criminal offense. See Glenn v. State, 753 So.2d 669 (Fla. 2d DCA 2000). But the mens rea that the legislature ascribed to this offense (that the defendant `knows or should know’ that the property in question was stolen) must still be proven; Mr. North's state of mind about his purported permission to take these materials, then, was a material issue in his case. Cf. Foster v. State, 778 So.2d 906, 915 (Florida Supreme Court 2000) (`Of course, the alternative purpose for which the statement is offered must relate to a material issue in the case . . . .’(citing State v. Baird, 572 So.2d 904, 907 (Florida Supreme Court 1990))). Thus we conclude the circuit court erred in precluding the line of testimony Mr. North proffered. Because we cannot construe that error as harmless in this case, we must reverse the circuit court's judgment and sentences and remand Mr. North's case for a new trial.
North v. State, supra.