In Re: Two Email Accounts Stored At Google, Inc. 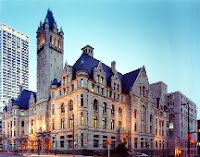 This post examines a recent opinion a U.S. Magistrate Judge who is assigned to the U.S. District Court for the Eastern District ofWisconsin issued in a civil case. As Wikipedia explains, “The United States district courts are the general trial courts of the United States federal court system.”
The Judge begins the opinion by explaining that
[i]n 1986, spurred by concerns that the then-current law was `hopelessly out of date,’ S. REP. 99-541, 2, 1986 U.S.C.C.A.N. 3555, 3556, Congress amended the Omnibus Crime Control and Safe Streets Act of 1968 with the Electronic Communications Privacy Act. PL 99–508 (HR 4952), PL 99–508, October 21, 1986, 100 Stat 1848. Included in the Act was the Stored Communications Act (SCA). At the time the SCA was enacted, the internet did not exist in any practical sense and email was in its infancy. See S. REP. 99-541, 8, 1986 U.S.C.C.A.N. 3555, 3562, 3563-65 (describing remote computer services, `computer-to-computer communications’ and `electronic mail’). Yet this decades-old statute, with a few intervening amendments, remains the primary tool used by law enforcement to access a myriad of electronic communications and records.
In re: Two email accounts stored at Google, Inc., 2017 WL 2838156 (2017).
The judge then goes on to explain what this case involves and how it arose:
Naturally, many aspects of contemporary technology are not directly addressed in the antiquated law. As technology continues to change beyond bounds even imagined three decades ago, prosecutors and law enforcement are more and more asking courts to proverbially fit square pegs into round holes – trying to make current technology fit within the outmoded constructs created by Congress in 1986 – such that the law might again be called `hopelessly out of date.’ But it is not the court's role to strain the strictures of a statute to create a space to fit each request from the government. If the court concludes that the government's request is outside the bounds of the statute, the court is obligated to reject it. That is true regardless of how practical or logical the request might seem; if there is a gap in the law, it is the obligation of Congress, not the courts, to fill it.

According to Google, Inc., the present case implicates one such gap in the law. On February 15, 2017, the government asked the court to issue a warrant commanding Google to disclose email records associated with two particular Gmail addresses. Google has turned over responsive records that it concluded were stored in a data center in the United States. But a dispute exists as to records that are or may be (for Google sometimes cannot be certain where a record is) stored in a data center outside the United States. Google’s position is that this court's warrant may not reach property stored outside the United States.
In re: Two email accounts stored at Google, Inc., supra.
The judge then explains that, in
light of the recent decision by the Courtof Appeals for the 2d Circuit in the case of In Re: Matter of Warrant to Search a Certain E–Mail Account Controlled & Maintained by Microsoft Corp., 829 F.3d 197 (2d Cir. 2016), when issuing the present warrant the court sua sponte paused to consider whether it can order Google to disclose information that Google stores on servers located outside of the United States. The court concluded that such an order was authorized under the SCA and issued a Memorandum in conjunction with the warrant. See In re Info. Associated with One Yahoo Email Address that is Stored at Premises Controlled by Yahoo, 2017 U.S. Dist. LEXIS 24591, 2017 WL 706307 (E.D. Wis. Feb. 21, 2017) (discussing present warrant along with a separate contemporaneous application regarding a Yahoo email address). Google has moved to `amend’ the warrant to exclude any data that it stores on servers located outside the United States. (ECF No. 8.) The court now considers its prior order anew with the benefit of adversarial argument and a more thorough record.
In re: Two email accounts stored at Google, Inc., supra.
The opinion goes on to outline the “relevant facts” involved in this litigation:
Because the facts presented in the application relate to an ongoing criminal investigation and an unexecuted warrant, they will be addressed here in only the broadest terms. For present purposes it is sufficient to state that the warrant relates to the investigation of persons who have already been indicted in this district. There is no indication that the relevant email accounts were used by persons outside the United States.

The parties stipulated to various other facts relevant to the present motion. (ECF No. 11.) Google is headquartered in California. (ECF No. 11, ¶ 1.) It stores user data at various locations, some of which are in the United States, some of which are not. (ECF No. 11, ¶ 2.) A user's files might be broken into component parts, and different parts of a single file may be stored in different locations, including in different countries. (ECF No. 11, ¶ 3). Google automatically moves user data to optimize performance, reliability, and other efficiencies. (ECF No. 11, ¶ 4.) Thus, data might be stored in one location when the government seeks a warrant and in a different location by the time Google is served with that warrant. (ECF No. 11, ¶ 4.) If data is stored in a foreign country, the tool that Google uses to identify data responsive to the warrant does not identify which specific foreign country the data is stored in. (ECF No. 11, ¶ 4.) The only Google personnel who can access data in response to a warrant are located in the United States. (ECF No. 11, ¶ 5.)
In re: Two email accounts stored at Google, Inc., supra.
Having summarized the facts, the Magistrate Judge goes on to outline the relevant law:
The government may obtain a warrant requiring `disclosure by a provider of electronic communication service of the contents of a wire or electronic communication, that is in electronic storage in an electronic communications system.’ 18 U.S. Code § 2703(a). Translated into simplified terms relevant to the present case, this means that a federal law enforcement officer can ask a United States Magistrate Judge to issue a warrant compelling an email service provider (e.g., Google, Yahoo, Microsoft, etc.) to disclose emails associated with a particular email address. (Again, the statute covers other sorts of information and the relevant application seeks details other than emails, such as account information, but for the sake of simplicity the court will refer here to emails.) If the law enforcement officer demonstrates that probable cause exists to believe that the emails will contain evidence of a crime, the court will order the email service provider to disclose the emails sent from or received at the identified email address.

With respect to search warrants generally, under certain circumstances a magistrate judge may issue a warrant authorizing a search in a district other than his or her assigned district. Federal Rules of Criminal Procedure 41(b)(2)-(6). However, aside from narrow exceptions related to searches in a `territory, possession, or commonwealth’ of the United States, and properties associated with consular missions, Fed. R. Crim. P.41(b)(5), Rule 41 is silent as to whether a federal court may issue a warrant for the search of property located outside of the United States.
In re: Two email accounts stored at Google, Inc., supra.
The Magistrate Judge then begins the process of articulating the analysis he must employ in deciding the issue in this case, explaining, initially, that
[a]ccording to Google, a warrant issued under 18 U.S.C. § 2703 is analogous to the court authorizing a government agent to enter a location in a foreign country, open a file cabinet, and seize all the papers it contains. Because it is presumed that a federal court does not have statutory authority beyond the United States, the court's order authorizing the seizure of data located in a foreign country was an impermissible extraterritorial order. The government views the warrant as more akin to a court order directing a person in the United States to collect records under that person's control and provide them to a government investigator.

The court acknowledges that a customer has a privacy interest in the data and that through the SCA Congress sought to protect that privacy interest. But for purposes of the Fourth Amendment that privacy interest is protected by the fact that the government must obtain a warrant, supported by probable cause, from a magistrate judge before it may obtain the data. See Microsoft Corp. v. United States (In re Warrant to Search a Certain E-Mail Account Controlled & Maintained by Microsoft Corp.), 855 F.3d 53, 61 (2d Cir. 2017) (Jacobs, J., dissenting from denial of rehearing) (`Important as privacy is, it is in any event protected by the requirement of probable cause; so a statutory focus on privacy gets us no closer to knowing whether the warrant in question is enforceable.’).
In re: Two email accounts stored at Google, Inc., supra.
The judge also noted that
[m]oreover, that privacy interest applies to the content of the records; the court find no such privacy interest with respect to the location of the data. That is especially true in the present case, where Google freely relocates data to further its service needs and without affording the user any apparent control as to where the data is stored. Therefore, ordering a service provider to transfer data from a data center in a foreign country to a data center in the United States does not implicate the user's privacy interests or rights under the Fourth Amendment `because there is no meaningful interference with the account holder's possessory interest in the user data’ as a result of the transfer. In re Search Warrant No. 16-960-M-01, 2017 U.S. Dist. LEXIS 15232, 2017 WL 471564 (E.D. Pa. Feb. 3, 2017).
In re: Two email accounts stored at Google, Inc., supra.
The court concludes the opinion with the following:
In sum, the court finds that because the order is directed toward a service provider that is within the reach of this court the fortuity of where that service provider may store the relevant data at a given moment in time does not implicate extraterritoriality concerns. Nor does it implicate the user's privacy interests to order a service provider to transfer the relevant data to a data center in the United States so that it may then be turned over to the government pursuant to a warrant supported by probable cause. The search and seizure does not occur until the service provider discloses the demanded information to the government, and this occurs in the United States.

IT IS THEREFORE ORDERED that Google Inc.'s motion to amend the warrant (ECF No. 8) is denied.