The Pawnshop, the Laptop and the Fourth Amendment 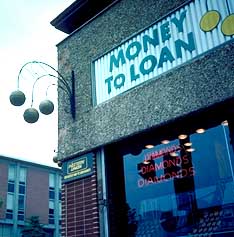 This post examines a recent opinion from the Court of Special Appeals of Maryland: Montgomery v. State, 2017 WL 1151053 (2017). The court begins by explaining that
on September 20, 2014”, David James Montgomery pawned his laptop computer at Washington Street Pawnbrokers to `get some money.’ According to the contract he entered with the pawnshop, he could redeem the laptop within thirty days (by October 10) by paying an agreed fee, else it would become the pawnshop's property and available for the shop to sell to others. Mr. Montgomery did not pay the fee in time, and the shop attempted twice to contact him to see if he planned to redeem it. He didn't respond, so a pawnshop employee began to prepare the laptop for resale.

As he worked on the laptop, the employee discovered a CD containing child pornography in the disc drive. The employee turned the CD over to police and gave consent to view it. After they watched the CD, the police obtained a warrant to search Mr. Montgomery's computer and, eventually, his house, where they found other incriminating evidence. Mr. Montgomery then was charged with sexual abuse of a minor, filming a minor engaging in sexual conduct, and related offenses.
Montgomery v. State, supra.
The opinion goes on to explain that
Montgomery filed a pretrial motion to suppress evidence, specifically the CD, alleging a violation of his Fourth Amendment rights. The motions court held a hearing, during which Mr. Montgomery testified that he did not mean to leave the CD in the laptop. His counsel argued that the CD should be treated as mislaid property, not abandoned property, because Mr. Montgomery did not intend to leave the CD in the computer when he pawned it. He argued as well that, pursuant to Maryland. Code (2002, 2012 Repl. Vol., 2016 Supp.), § 7-104(d) of the Criminal Law Article (the `theft statute’), Mr. Montgomery retained a property interest in the CD, and so the pawnshop employee's consent to search the CD was invalid and the police were required to obtain a warrant before viewing it. The State countered that the search did not violate the Fourth Amendment because Mr. Montgomery had abandoned the CD (along with the laptop) when he failed to redeem it from the pawnshop, and thus he retained no constitutionally protected privacy interest in it. The court agreed with the State and issued a memorandum and order, which we discuss below, denying the motion. This timely appeal followed.
Montgomery v. State, supra.
The appeals court went on to explain that Montgomery
argues on appeal that the circuit court erred in denying his motion to suppress. He contends that the motions `court should have viewed the CD as property delivered by mistake rather than property abandoned or sold,’ which, pursuant to the theft statute, would have imposed on the pawnshop a duty to return the CD to him and rendered the pawnshop's consent to view the CD invalid. The State counters that the court correctly denied the motion to suppress because once `[Mr.] Montgomery abandoned the laptop and the CD that was in it, [he] had no expectation of privacy in the CD and thus the Fourth Amendment was not implicated.’ We agree with the State.

In reviewing a circuit court's decision on a motion to suppress evidence, we consider only the facts developed at the suppression hearing. Lee v. State, 418 Md. 136, 148 (2011) (citation omitted). We view the evidence in the light most favorable to the prevailing party—here, the State—and defer to the suppression court's factual findings unless clearly erroneous. Briscoe v. State, 422 Md. 384, 396 (2011). `We, however, make an independent appraisal of the constitutionality of a search, applying the law to the facts found in each particular cases.’ Id. (citation and internal quotations omitted).
Montgomery v. State, supra.
The court then took up the constitutional issue, explaining that the Fourth Amendment to the United States Constitution,
which applies to the States through the Fourteenth Amendment, provides that `[t]he right of the people to be secure in their persons, houses, papers, and effects, against unreasonable searches and seizures, shall not be violated .. .’ See Mapp v. Ohio, 367 U.S. 643, 655 (1961); Paulino v. State, 399 Md. 341, 349 (2007). The Fourth Amendment does not prohibit all governmental searches and seizures, but protects against `unreasonable and arbitrary governmental intrusions.’ Powell v. State, 139 Md. App 582, 598–99 (2001) (citations omitted). `[A]pplication of the Fourth Amendment depends on whether the person invoking its protections can claim a “justifiable,” a “reasonable,” or a “legitimate expectation of privacy” that has been invaded by government action.’ Smith v. Maryland, 442 U.S.735, 740 (1979). The person invoking Fourth Amendment protections has the burden to prove his or her legitimate expectation of privacy in the place searched or the item seized. Id. at 740 (1979) (citations omitted). A two-part test determines whether Fourth Amendment protection applies to a particular search:

Powell, 139 Md. App. at 605 (quoting Stanberry, 343 Md. at 733). We agree with the motions court's conclusion that `[Mr. Montgomery] simply was not paying sufficient attention or taking any action whatsoever to protect or maintain any expectation of privacy in the CD in the CD drive.’ Indeed, he did nothing to protect his privacy interest in the CD: he left it at the pawnshop for over a month, past the time period in which he could redeem the laptop; he did not respond to the pawnshop's efforts to reach him about redeeming the laptop; he knew the pawnshop would become the laptop's rightful owner if he failed to redeem it; and he accepted payment for the laptop and never attempted to repurchase it. Some pawnshop transactions function as short-term loans, others as a straight sale. In this instance, Mr. Montgomery sold the laptop and evinced no sense of intention to redeem the laptop—he took the cash and left the property behind, including the CD.

Moreover, Mr. Montgomery did not have a privacy right in the CD that society would recognize as reasonable. Once you pawn something and fail to redeem it, it becomes the pawnshop's property, and his contract with this pawnshop followed that model. Just as stashing drugs inside another person's room does not give the stasher a reasonable expectation of privacy, Simpson v. State, 121 Md. App. 263, 282 (1998), leaving child pornography in the disc drive of a pawned computer did not give Mr. Montgomery a reasonable expectation of privacy in the disc. Once he had relinquished it to the pawnshop, to the contrary, Mr. Montgomery abandoned the CD, and the police did not need his consent, let alone a warrant, to view it. See Powell, 139 Md. App. at 607 (noting that, once a defendant abandoned a paper bag by leaving it in the curb area of a public street, `the police were entitled to look inside it’).
Montgomery v. State, supra.
The court wound up the opinion by explaining that
[n]or are we persuaded by Mr. Montgomery's argument that the CD should be treated differently than other allegedly abandoned items because it could contain personal data. Cf. Riley v. California, 134 S. Ct. 2473, 2485 (2014) (requiring a warrant before officers can search a smart phone); United States v. Alabi, 943 F. Supp. 2d 1201, 1270 (D.N.M. 2013) (distinguishing CDs from credit cards because the latter can store personal data). There might be more to this argument if Mr. Montgomery hadn't abandoned the CD, but he did, and the police were free to search whatever he left behind. Put in paper terms, as the motions court found, the police are entitled to read the entire contents of an abandoned file folder, and thus all of the files on an abandoned CD:

While those cases discussing electronic devices that store various kinds of data do have applicability in some circumstances, in this case the first question in the analysis is still whether the property was abandoned for Fourth Amendment purposes, or not. If it was abandoned, and there is no reasonable expectation of privacy for Fourth Amendment purposes, it does not matter whether it is an electronic storage device, electronic media, or a piece of paper. With abandonment ... there is no need for a warrant and the State has met its burden.

The court did not err, therefore, in concluding that the police were entitled to review its contents in full after Mr. Montgomery abandoned it.