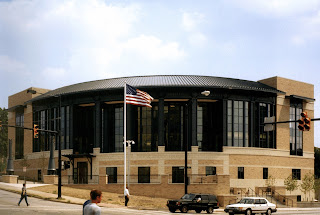 This post examines an opinion from the U.S. Court of Appeals for the 6th Circuit: U.S. v. Ray, 632 Fed.Appx. 260 (2016).  The court begins by explaining that
Thomas Ray tried to blackmail the University of Louisville by sending emails under the false name `Melinda White’ to two senior officials in the school's athletics department. `Ms. White’ claimed to have in her possession video evidence showing one of the starting players on the University's men's basketball team agreeing to participate in an illegal point-spread scheme.  The email offered to keep the matter hushed up in exchange for $3.5 million.

The FBI traced the emails to a home in Jackson, Mississippi, where Ray lived. Law enforcement obtained and executed a search warrant. In order to `secur[e] the scene,’ the officers conducting the search handcuffed Ray and put him in the back of a patrol car, but told him that they were not arresting him. They searched Ray's bedroom and found a pair of laptops that had accessed the Melinda White email account as well as an index card with the Melinda White email address and password. The emails themselves, however, were not found on either computer.
U.S. v. Ray, supra.
The opinion goes on to explain that
[a]t some point during the search, the officers advised Ray of his Miranda rights, and he immediately asked for an attorney. The officers did not question him, and they eventually removed the handcuffs. They then `allowed [him] to sit on the front porch of his home while Agents completed the search.’ One of the officers, accompanied by an FBI agent, approached Ray and introduced himself as a Louisville police officer; he told Ray that the officers were there to investigate the Melinda White emails and that the search had revealed the incriminating index card in Ray's room. The officer explained that Ray would not be going to jail that day but that it was `very possible that [he] might in the future.’ RAY still did not wish to speak with Agents but he began to sweat profusely and rub his legs rapidly. As [the agents] walked away from RAY, RAY stated ‘I didn't hurt anybody.’
U.S. v. Ray, supra.
Next, the opinion notes that a
federal grand jury indicted Ray for violating 18 U.S. Code § 875(d), which criminalizes knowingly transmitting in interstate commerce an email with the intent to extort. Before the trial, Ray moved to suppress both his nervous physical reaction and his utterance `I didn't hurt anybody,’ contending that these had been obtained in violation of his Sixth Amendment right to counsel. The district court denied the motion, and the evidence was admitted at trial. At the close of proof, Ray's attorney renewed his motion to suppress. The court again denied the motion, explaining that `[i]t got real close . . . to being that [the police] intended to elicit a response, but I'm going to overrule that renewed motion and the record will stand.’

The jury found Ray guilty, and the district court sentenced him to two years of imprisonment and one year of supervised release. Ray filed this timely appeal. He contends that the police violated both his Fifth and Sixth Amendment rights and that the district court should have suppressed the evidence of his nervous physical reaction and his utterance `I didn't hurt anybody.’ We affirm.
U.S. v. Ray, supra.
The court goes on to explain that
Ray's Sixth Amendment argument fails because that amendment applies only after the initiation of adversarial judicial proceedings. See McNeil v. Wisconsin, 501U.S. 171, 175 (1991). There is no merit to Ray's contention that such proceedings began with the issuance of the search warrant and the officers' focus on him during the investigation. See United States v. Myers, 123 F.3d 350, 359 (U.S. Court of Appeals for the 6th Circuit 1997) (collecting cases); see also United States v. Ortkiese, 208 Fed.Appx. 436, 440 (U.S. Court of Appeals for the 6th Circuit 2006).

The question is closer with regard to the Fifth Amendment. Unfortunately for Ray, the relevant portions of both his motion to suppress and his renewed motion at trial invoked only the Sixth Amendment, and we review for plain error `new suppression arguments raised for the first time on appeal after a defendant's original suppression arguments proved unsuccessful at the trial court level.’ United States v. Lopez–Medina, 461 F.3d 724, 739 (U.S. Court of Appeals for the 6th Circuit 2006). `The plain error doctrine is to be used only in exceptional circumstances to avoid a miscarriage of justice.’ Id. `An error is plain when it is obvious, affects substantial rights, and seriously affects the fairness or integrity of judicial proceedings.’ Id.

Because he invoked his right to counsel, Ray was entitled to suppression of any (1) statement, Pennsylvaniav. Muniz, 496 U.S. 582, 589 (1990), (2) made while in custody, United States v. Salvo, 133 F.3d 943, 948 (U.S. Court of Appeals for the 6th Circuit1998), and (3) in response to interrogation, Rhode Island v. Innis, 446 U.S. 291, 300–02 (1980).
U.S. v. Ray, supra (emphasis in the original).
The court then took up each of those requirements, beginning with the issue of a “statement:”
The Fifth Amendment privilege against self-incrimination `protects an accused only from being compelled to testify against himself, or otherwise provide the State with evidence of a testimonial or communicative nature.’ Pennsylvania v. Muniz, supra (quoting Schmerber v. California, 384 U.S. 757,761 (1966)). `[I]n order to be testimonial, an accused's communication must itself, explicitly or implicitly, relate a factual assertion or disclose information.’ Doe v. United States, 487 U.S. 201, 210 (1988). Thus, Ray's nervous physical reaction was not a `statement’ protected by the Fifth Amendment, see United States v. Velarde–Gomez, 269 F.3d 1023, 1030 (U.S. Court of Appeals for the 9th Circuit 2001) (en banc), but the utterance `I didn't hurt anybody’ was, see Doe v. United States, supra.
U.S. v. Ray, supra.
The court then took up the issue of “custody” for the purposes of applying the Miranda principles:
In determining whether someone was in custody, `the only relevant inquiry is how a reasonable man in the suspect's position would have understood his situation.' Berkemer v. McCarty, 468 U.S. 420, 442 (1984). We have highlighted four factors that are relevant to this analysis: `(1) the purpose of the questioning; (2) whether the place of the questioning was hostile or coercive; (3) the length of the questioning; and (4) other indicia of custody.’ United States v. Salvo, supra.  The `other indicia’ of custody include

Id. Some of these factors weigh in the government's favor: the interaction was very brief and occurred on the front porch of Ray's mother's house, which is not an inherently coercive space. The officer, moreover, was not `questioning’ Ray in the usual sense, but was explaining who he was, what the search had revealed, and the possible consequences for Ray.

On the other hand, Ray may have felt significant pressure to remain where he was. The officers had only recently released him from handcuffs and had merely `allowed’ him to sit on the front porch. And though he was not `questioned,’ the context does indicate a significant level of pressure in the interaction similar to questioning. As the officer admitted at trial, `if [my statements] were to elicit a response, that would benefit me.’ This would be a closer question if Ray had preserved it for appeal. But we are reviewing the Fifth Amendment argument for plain error, and the error, if any, was not obvious.
U.S. v. Ray, supra.
Finally, the Court of Appeals took up the issue of interrogation, explaining that the
interaction, moreover, was not obviously `interrogation’ either. As we have explained, `[a]n accurate statement made by an officer to an individual in custody concerning the nature of the charges to be brought against the individual cannot reasonably be expected to elicit an incriminating response.’ United States v. Collins, 683 F.3d 697, 703 (U.S. Court of Appeals for the 6th Circuit 2012).
Ray has failed to show plain error. And as mentioned above there is no merit in Ray's Sixth Amendment argument. We therefore affirm.
U.S. v. Ray, supra.

Posted by Susan Brenner at 2:06 PM