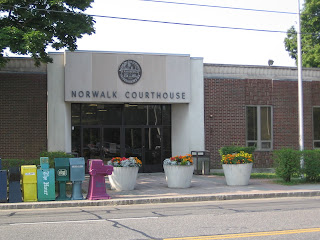 This post examines an opinion from the Appellate Court of Connecticut:  State v.
Dunbar, 2016 WL 1566996 (2016).  The court begins the opinion by explaining that
[t]he defendant, Lonnie Dunbar, appeals from his judgment of conviction, rendered after a trial to the court, on the charge of operating a motor vehicle upon a highway while using a hand-held mobile telephone in alleged violation of General Statutes § 14–296aa (b).

On appeal, the defendant claims that the trial court improperly found him guilty under that statute. We agree with the defendant, and accordingly we reverse the judgment of the trial court and remand the case with direction to render a judgment of acquittal.
State v. Dunbar, supra.
Before I outline the facts and procedural history of the case, I need to note that
Connecticut General Statutes § 14–296aa(b)(1) provides as follows:
Except as otherwise provided in this subsection and subsections (c) and (d) of this section, no person shall operate a motor vehicle upon a highway, as defined in section 14-1, while using a hand-held mobile telephone to engage in a call or while using a mobile electronic device. An operator of a motor vehicle who types, sends or reads a text message with a hand-held mobile telephone or mobile electronic device while operating a motor vehicle shall be in violation of this section, except that if such operator is driving a commercial motor vehicle, as defined in section 14-1, such operator shall be charged with a violation of subsection (e) of this section.
And Connecticut General Statutes § 14-1(54) defines “motor vehicle” as
any vehicle propelled or drawn by any nonmuscular power, except aircraft, motor boats, road rollers, baggage trucks used about railroad stations or other mass transit facilities, electric battery-operated wheel chairs when operated by physically handicapped persons at speeds not exceeding fifteen miles per hour, golf carts operated on highways solely for the purpose of crossing from one part of the golf course to another, golf-cart-type vehicles operated on roads or highways on the grounds of state institutions by state employees, agricultural tractors, farm implements, such vehicles as run only on rails or tracks, self-propelled snow plows, snow blowers and lawn mowers, when used for the purposes for which they were designed and operated at speeds not exceeding four miles per hour, whether or not the operator rides on or walks behind such equipment, motor-driven cycles as defined in section 14-286, special mobile equipment as defined in section 14-165, mini-motorcycles, as defined in section 14-289j, and any other vehicle not suitable for operation on a highway. . . .
Getting back to the Appellate Court’s opinion, it begins by explaining that at
trial, the state presented the testimony of Trooper Josh McElroy of the Connecticut State Police.  McElroy testified that on the morning of April 19, 2014, while he was on traffic enforcement duty observing passing traffic on Route 66 in Columbia from an elevated parking lot, he saw the defendant drive by in a gray car while holding a cell phone in his right hand, `right around the steering wheel—or I mean the steering wheel height in the center of, the center of the car.’ Upon making that observation, McElroy pulled out from the parking lot, activated the lights of his cruiser, and pulled the defendant's vehicle over. When McElroy stopped the defendant, the defendant told him that he was `just answering’ his cell phone. McElroy observed that `[h]e had some type of microphone. It looked like from like a Walkman almost on his head. . . . He said that's what he used to talk on the phone.’ McElroy explained to the defendant that he had been cited for an infraction because `[y]ou were using your cell phone while you were driving.’

Based upon the foregoing evidence, the trial court concluded: `[T]he state has established beyond a reasonable doubt that the defendant, on April 19, 2014, was using a hand-held device while operating a motor vehicle. . . . Accordingly, the court finds the defendant guilty of violating . . . § 14–296aa as a second time offender.’ The court imposed a fine of $250 plus fees and costs. This appeal followed.

On appeal, the defendant claims that the evidence was insufficient to sustain the court's finding of guilt because the state failed to prove beyond a reasonable doubt that he was engaged in a call, as required to prove a violation of § 14–296aa, instead of merely answering his cell phone at the time that the trooper observed him holding it in his right hand. We agree.
State v. Dunbar, supra.
The Appellate Court went on to explain that
`In [a defendant's] challenge to the sufficiency of the evidence . . . [w]hether we review the findings of a trial court or the verdict of a jury, our underlying task is the same. . . . We first review the evidence presented at trial, construing it in the light most favorable to sustaining the facts expressly found by the trial court or impliedly found by the jury. We then decide whether, upon the facts thus established and the inferences reasonably drawn therefrom, the trial court or the jury could reasonably have concluded that the cumulative effect of the evidence established the defendant's guilt beyond a reasonable doubt. . . .

In assessing the defendant's claim that the evidence against him was insufficient to establish his guilt . . . we must look to the trial court's findings of fact.... [W]e give great deference to the findings of the trial court because of its function to weigh and interpret the evidence before it and to pass upon the credibility of witnesses. . . .’

`In evaluating evidence that could yield contrary inferences, the trier of fact is not required to accept as dispositive those inferences that are consistent with the defendant's innocence. . . . The trier [of fact] may draw whatever inferences from the evidence or facts established by the evidence it deems to be reasonable and logical. . . . As we have often noted, proof beyond a reasonable doubt does not mean proof beyond all possible doubt . . . nor does proof beyond a reasonable doubt require acceptance of every hypothesis of innocence posed by the defendant that, had it been found credible by the trier [of fact], would have resulted in an acquittal. . . . On appeal, we do not ask whether there is a reasonable view of the evidence that would support a reasonable hypothesis of innocence. We ask, instead, whether there is a reasonable view of the evidence that supports the [trier of fact's] verdict of guilty.’ (Citations omitted; internal quotation marks omitted.) State v. Drupals, 306 Conn. 149, 157–58, 49 A.3d 962 (Connecticut Supreme Court 2012).
State v. Dunbar, supra.
The Appellate Court then took up the issue in this case, explaining that
Section 14–296aa(b)(1) provides in relevant part: `[N]o person shall operate a motor vehicle upon a highway, as defined in section 14–1, while using a hand-held mobile telephone to engage in a call or while using a mobile electronic device. . . .’ Here, the trial court did not set forth the factual findings underlying its determination that the state had established beyond a reasonable doubt that the defendant had violated § 14–296aa. In order to make that determination, however, the court necessarily had to find that the defendant had been operating his vehicle while using his hand-held mobile telephone to engage in a call. The defendant claims on appeal that the state failed to prove that he was engaged in a call as he was merely answering his cell phone at the time that the trooper observed it in his right hand. In response to the defendant's claim, the state argues that the court could have presumed that the defendant was engaged in a call at that time due to the proximity of the phone to his ear.

To `[e]ngage in a call’ is defined in § 14–296aa(a)(6) as `talking into or listening on a hand-held mobile telephone, but does not include holding a hand-held telephone to activate, deactivate or initiate a function of such telephone.’ Section 14–296aa(b)(2) provides: `An operator of a motor vehicle who holds a hand-held mobile telephone to, or in the immediate proximity of, his or her ear while operating a motor vehicle is presumed to be engaging in a call within the meaning of this section. The presumption established by this subdivision is rebuttable by evidence tending to show that the operator was not engaged in a call.’ Section 14–296aa (a)(7) defines `[i]mmediate proximity’ as `the distance that permits the operator of a hand-held mobile telephone to hear telecommunications transmitted over such hand-held mobile telephone, but does not require physical contact with such operator's ear.’
State v. Dunbar, supra.
The court then pointed out that, at trial, the prosecution
offered no direct evidence to support a finding that the defendant was engaged in a call when McElroy saw him holding his cell phone. McElroy testified that he saw the defendant from approximately twenty feet away, while the defendant was driving on the highway, holding his cell phone in his right hand in the center of the car at the approximate height of the steering wheel. Although the court could have inferred from that testimony that the defendant was seen holding a cell phone in his hand that it was no further from his ear than the length of his arm, no evidence was presented as to the length of the defendant's arm, or whether he was holding the phone in such a way as to suggest that he was then using it to engage in a call.

McElroy's testimony that the defendant was holding the phone `in the center of the car’ does little to elucidate its precise location. More importantly, perhaps, no evidence was presented as to what type of phone the defendant was holding, what speaker feature it may have had, whether any such speaker features were then engaged, and, if so, at what volume they were set. There was thereby no evidence from which the court reasonably could have inferred that the phone was being held close enough to the defendant's ear to permit him to hear telecommunications transmitted over it. Absent such proof, the statutory presumption was unavailable to support the necessary finding that the defendant was then engaged in a call.
State v. Dunbar, supra.
The court therefore held that
[a]bsent any basis for the presumption, the only evidence as to how the defendant was using the phone as he held it came from the defendant's statements to McElroy when he was pulled over, all of which are inconsistent with the court's finding of guilt.

To begin with, the defendant's statement that he was holding the phone to answer it merely brought his conduct within the statutory exception for holding a phone to activate or initiate a function on it, which does not constitute `engaging in a call’ as a matter of law. Second, his statement that the Walkman-like device on his head was the apparatus he used to speak on the phone tended to show that the device held in his hand was not what he used for that purpose. Although the court need not have believed these statements, it could not have drawn an inference to the contrary of either statement merely because the defendant made it. See State v. Alfonso, 195 Conn. 624, 633, 490 A.2d 75 (Connecticut Supreme Court 1985).
State v. Dunbar, supra.
The Appellate Court therefore ordered that the “judgment is reversed and the case is remanded to the trial court with direction to render a judgment of acquittal.” State v. Dunbar, supra.


You can, if you are interested, you can find a news story here, that describes the traffic stop at issue in this case, and adds some other details.
Posted by Susan Brenner at 6:22 PM