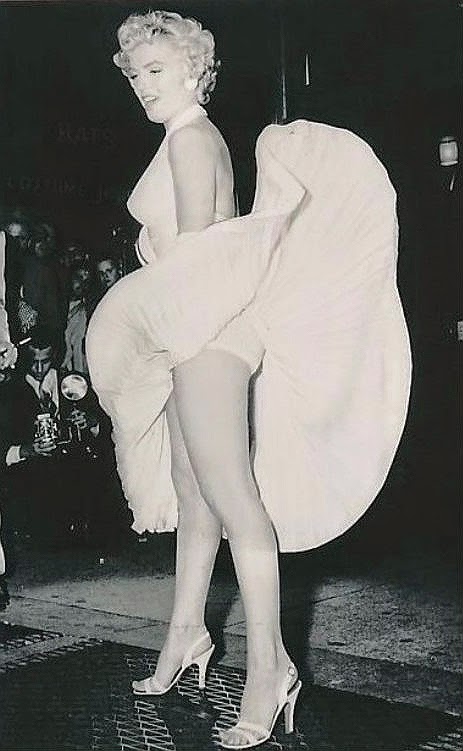 After a jury convicted Jesse Schmucker of “attempt to capture nudity, contrary to [Wisconsin Statutes] §§ 942.09(2)(am)1 and 939.32 and disorderly conduct” in violation of Wisconsin Statutes § 947.01, he appealed the “attempting to capture nudity conviction, arguing that the evidence was insufficient to sustain the jury's verdict.”  State v. Schmucker, 2015 WL 1541419 (Wisconsin Court of Appeals 2015).  As the opinion notes, Schmucker was convicted of what is colloquially known as “`upskirting,’ or taking a picture up a woman's skirt without her consent.”  State v. Schmucker, supra.
The court begins its opinion by explaining how, and why, the prosecution arose:
The victim was standing in line at the check-out counter of the grocery store, fully dressed, when Schmucker bent over and took a picture up her skirt by placing his cell phone between her legs. The incident was captured on security video. . . .

There was testimony at trial that Schmucker told a police detective that he was seeking replacement pornography because he had his computers blocked from pornography as part of his counseling for an addiction to pornography. Schmucker testified that the reason he took the picture was because he wanted to see the victim's underwear, though he also testified that when he took pictures up women's skirts, he had no idea whether they would be wearing underwear or not. Schmucker knew that the victim would not have consented to such pictures.
State v. Schmucker, supra.
The news story you can find here provides more information about Schmucker and the facts that led to his being prosecuted, essentially, for “upskirting.”  And the stories you can find here and here explain that upskirting, as such, might not have been illegal in Wisconsin at the time and may not be illegal in other jurisdictions.
The Court of Appeals began its analysis of Schmucker’s challenge to his conviction for attempting to capture nudity by explaining that Schmucker argued that
nudity or partial nudity of the victim is an element of the offense and that there was insufficient evidence to establish this element of attempting to capture a representation of a nude or partially nude person. In essence, Schmucker argues that it was factually impossible for him to commit the crime of capturing a representation of partial nudity, so he cannot be convicted of the attempt. The State responds that Schmucker can be found guilty of the attempted crime even though the woman was wearing underwear and that sufficient evidence supports the jury's determination that Schmucker intended to capture partial nudity.
State v. Schmucker, supra.
Schmucker, of course, was convicted of attempting to capture nudity in violation of Wisconsin Statutes §§ 942.09(2)(am)1 and 939.32.  State v. Schmucker, supra. As Wikipedia explains, “attempt” is an “inchoate”, or incomplete, crime.  The Court of Appeals, then, began its analysis of Schmucker’s challenge to his conviction by quoting Wisconsin Statutes § 939.32(3), which, as the court noted, “sets forth the requirements for an attempt to commit a crime”:  State v. Schmucker, supra.
An attempt to commit a crime requires that the actor have an intent to perform acts and attain a result which, if accomplished, would constitute such crime and that the actor does acts toward the commission of the crime which demonstrate unequivocally, under all the circumstances, that the actor formed that intent and would commit the crime except for the intervention of another person or some other extraneous factor.
State v. Schmucker, supra (quoting Wisconsin Statutes § 939.32(3)).
The court went on to explain that there are
two elements to the crime of attempt: `(1) an intent to commit the crime charged; and (2) sufficient acts in furtherance of the criminal intent to demonstrate unequivocally that it was improbable the accused would desist from the crime of his or her own free will.’ State v. Robins, 253 Wis.2d 298, 646 N.W.2d 287 (Wisconsin Supreme Court 2002). . . . The law does not punish a person for guilty intentions alone, but for `acts that further the criminal objective.’ State v. Stewart, 143 Wis.2d 28, 420 N.W. 2d 44 (Wisconsin Supreme Court 1988). `The crime of attempt is complete when the intent to commit the underlying crime is coupled with sufficient acts to demonstrate the improbability of free will desistance. . . .’ State v. Robins, supra. . . .
State v. Schmucker, supra.
The Court of Appeals goes on the explain that it is
no defense to an attempt crime that a factual impossibility has arisen that prevents the actor from committing the intended crime. 2 Wayne R. Lafave, Substantive Criminal Law § 11.5(a) (2d ed. 2003). For example, in State v. Kordas, 191 Wis.2d 124, 528 N.W.2d 483 (Wisconsin Court of Appeals 1995), Kordas bought a motorcycle from an undercover police officer. State v. Kordas, supra. The police had modified the motorcycle so that it appeared stolen. State v. Kordas, supra. Kordas admitted that he thought the motorcycle was stolen. State v. Kordas, supra. Notwithstanding, Kordas moved to dismiss the complaint charging him with attempting to receive stolen property, and the trial court concluded that it was `legally impossible’ to commit attempt to receive stolen property when the property was in fact not stolen. State v. Kordas, supra. The court of appeals reversed, reasoning that a fact unknown to the actor cannot negate his intent to commit the crime. State v. Kordas, supra.
`[I]mpossibility not apparent to the actor should not absolve him from the offense of attempt to commit the crime he intended. . . . In so far as the actor knows, he has done everything necessary to insure the commission of the crime intended, and he should not escape punishment because of the fortuitous circumstance that by reason of some fact unknown to him it was impossible to effectuate the intended result.’
State v. Damms, 9 Wis.2d 183, 100 N.W.2d 592 (Wisconsin Supreme Court 1960) (defendant's inability to commit murder with unloaded gun did not preclude conviction for attempted murder where defendant intended to kill and thought gun was loaded); see also State v. Robins, supra (crime of attempted child enticement may be charged even though, unbeknownst to the defendant, the child is fictitious).
State v. Schmucker, supra.
The Court of Appeals went on to explain that
[t]hus, it is no defense that a fortuitous circumstance made it impossible to effectuate the intended result. There were sufficient facts to show that Schmucker took acts to further his criminal objective. Regarding Schmucker's actual intent, Schmucker testified at trial that he took the picture because he wanted to see the victim's underwear, and he argues on appeal that underwear would be expected, and thus was not an unknown impossibility. But there was also testimony that when he took pictures up women's skirts, Schmucker had no idea whether they would be wearing underwear or not.

There was testimony that Schmucker told a police detective that he was seeking replacement pornography because his computer had a filtering device that would block inquiries for porn. Schmucker told the detective he had installed the filter and had an addiction to pornography. In denying the motion to dismiss prior to trial, the trial court understood pornography to mean `printed or visual material containing the explicit description or display of sexual organs or activity,’ and the jury could have used a similar understanding to conclude that under the circumstances Schmucker was attempting to capture an image of the victim's nude buttocks or genitalia. `The credibility of the witnesses and the weight of the evidence is for the trier of fact.’ State v. Poellinger, 153 Wis.2d 493, 452 N.W.2d 752 (Wisconsin Supreme Court 1990).
State v. Schmucker, supra.
The court then found that in this case,
the jury found that Schmucker intended to capture an image of a partially nude person and that he committed acts that would have constituted that crime. It is no defense that the fortuitous circumstances—that the victim was wearing underwear—made that crime factually impossible.
State v. Schmucker, supra.
Finally, it addressed the other argument Schmucker made, i.e., that the victim did not
have a reasonable expectation of privacy in not being photographed under her skirt while in the grocery store. In State v. Nelson, 294 Wis.2d 578, 718 N.W.2d 168 (Wisconsin Court of Appeals 2006), `we concluded that “reasonable expectation of privacy” is not a technical or specially defined phrase in the statute. Rather, we looked to the common meanings of the words “expectation” and “privacy.”’ State v. Jahnke, 316 Wis.2d 324, 762 N.W.2d 696 (Wisconsin Supreme Court 2008) (quoting State v. Nelson, supra).

We noted that the statute requires that the person is `in a circumstance in which he or she has an assumption that he or she is secluded from the presence or view of others, and that assumption is a reasonable one under all the circumstances . . . according to an objective standard.’ State v. Nelson, supra. In State v. Jahnke, supra, we clarified that Wisconsin Statutes § 942.09(2)(am) `does not criminalize the viewing of a nude person, regardless of the circumstances.’  State v. Jahnke, supra.

Instead, it protects a person's interest in limiting the capturing of images of his or her nude body. State v. Jahnke, supra. `It follows that the pertinent privacy element question is whether the person depicted nude had a reasonable expectation, under the circumstances, that he or she would not be recorded in the nude.’ State v. Jahnke, supra. Whether someone has such a reasonable expectation of privacy under the circumstances is a fact-specific inquiry. State v. Jahnke, supra.
State v. Schmucker, supra.
The Court of Appeals then explained that Schmucker argued, on appeal, that the
victim had no reasonable expectation of privacy in a public place—the grocery store. When denying Schmucker's motion to dismiss after the close of the State's evidence, the trial court focused on the more specific location of under the victim's skirt:

`In terms of the reasonable expectation of privacy, I do think that this goes to how you look at the place, so to speak, and is the place the Pick ‘n Save or is the place up your skirt. And a person has a reasonable expectation of privacy up their skirt whether they're in the Pick ‘n Save, or subway, or the baseball field.’
State v. Schmucker, supra.
The court therefore explained that it agreed with the trial judge that a jury could
reasonably conclude that the victim had a reasonable expectation of privacy regarding surreptitious photographs taken of the private area underneath her skirt in a public place. We reject Schmucker's argument that a woman in a public place `assumes the risk that other members of the public may view her from almost any angle or from any vantage point.’

The facts here were sufficient for the jury to determine that the woman had a reasonable assumption under the circumstances that her pubic area and buttocks were secluded from the view, and the photography, of others. We reject Schmucker's argument that, as a matter of law, a woman relinquishes her reasonable expectation of privacy from being photographed without knowledge or consent underneath her skirt because she is in a public place.
State v. Schmucker, supra.  The court therefore affirmed Schmucker’s conviction for attempting to capture nudity.  State v. Schmucker, supra.
It appears that few, if any, states have laws that criminalize upskirting, as such.  The news story you can find here says the Oregon legislature recently voted to “amend the state's invasion of privacy law to make criminal the voyeuristic acts known as `upskirting’ and `downblousing.’" You can, if you are interested, find the legislation in question here.  And the Wikipedia entry you can find here reviews the law on upskirting as it exists in the United States and in other countries.

Posted by Susan Brenner at 9:55 AM