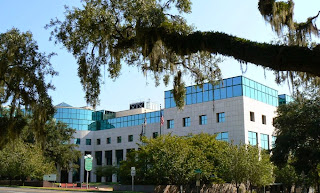 After Kendrick Herring was charged with a number of crimes, which are listed later in this post, he filed a motion to suppress “any evidence obtained as a result of the search and seizure of his real-time cellphone location data.”  Herring v. State, 2015 WL 2436457 (Florida Court of Appeals – 1st District 2015).  To understand the charges, and the motion to suppress, it is necessary to understand how the prosecution arose.
The Court of Appeals began its opinion by explaining that
[o]n March 18, 2011, Timmy Andrew and [Herring] made contact via cellphone to arrange a drug deal. Andrew and his friend, Terry Eubanks, met [Herring] around 10:30 p.m. When they arrived at the address [Herring] gave Andrew, [Herring] and Andrew discussed the sale, and [Herring] then opened fire on the vehicle Andrew and Eubanks were occupying. Andrew and Eubanks managed to escape from the scene, fled to Eubanks' home, and contacted law enforcement. Andrew died of his injuries, and Eubanks suffered a gunshot wound to his arm.

Around 11:15 p.m., Eubanks told law enforcement that Andrews and [Herring] had been communicating via cellphone. At 1:52 a.m., law enforcement contacted the cellphone provider using an exigent circumstances form and asked for [Herring’s] real-time cellphone location data. Around 2:50 a.m., the cellphone provider began sending the real-time cellphone location data. [Herring] was located using this data and was arrested around 4:00 a.m. During [Herring’s] arrest, law enforcement recovered a .45 caliber handgun, which matched the projectiles recovered from Andrew as well as the casings found at the scene of the shooting. Law enforcement also recovered the cellphone that was used to communicate with Andrew earlier in the evening.
Herring v. State, supra.
Herring was charged with “(1) second-degree murder; (2) attempted first-degree murder; (3) aggravated assault on a law enforcement officer; (4) possession of a firearm by a convicted felon; (5) carrying a concealed firearm; and (6) resisting an officer with violence.” Herring v. State, supra.  He responded by filing a motion to suppress,
arguing that his real-time cellphone location data was illegally seized because law enforcement did not seek a warrant and none of the warrantless search and seizure exceptions applied. [Herring] sought to suppress the cellphone, firearm, and all other physical evidence recovered during his arrest. Following a suppression hearing, the trial court entered an order finding that there were exigent circumstances in this case that abrogated law enforcement's requirement to obtain a warrant.
Herring v. State, supra.
The Court of Appeals began its analysis of the issues Herring raised on appeal by explaining that the
standard of review for a motion to suppress is summarized in State v. Gandy, 766 So.2d 1234 (Florida Court of Appeals – 1st District 2000):

`A trial court's ruling on a motion to suppress comes to us clothed with a presumption of correctness, and we must interpret the evidence and reasonable inferences and deductions in a manner most favorable to sustaining that ruling. Johnson v. State, 608 So.2d 4 (Florida Supreme Court1992). . . .  In this case, the facts are undisputed and supported by competent substantial evidence. See Caso v. State, 524 So.2d 422 (Florida Supreme Court (1988). . . . Accordingly, our review of the trial court's application of the law to the facts is de novo. See United States v. Harris, 928 F.2d 1113 (U.S. Court of Appeals for the 11th Circuit 1991). In addition, we are constitutionally required to interpret search and seizure issues in conformity with the 4th Amendment of the United States as interpreted by the U.S. Supreme Court. See Fla. Constitution art. I, § 12; Perez v. State, 620 So.2d 1256 (Florida Supreme Court1 993). . . .’
Herring v. State, supra (quoting State v. Gandy, supra).
The Court of Appeals then took up Herring’s argument in this appeal, explaining that he
argues that he had a reasonable expectation of privacy in his real-time cellphone location data. The Florida Supreme Court in Tracey v. State recently held that `regardless of Tracey's location on public roads, the use of his cell site location information emanating from his cell phone in order to track him in real time was a search within the purview of the 4th Amendment for which probable cause was required.’ 152 So.3d 504 (Florida Court of Appeals 2014). As such, [Herring] is correct that he has a reasonable expectation of privacy in his real-time cellphone location data.
Herring v. State, supra.
The court went on to explain that the
circumstances at issue here occurred prior to the Tracey ruling, and the State argues that the good faith exception applies. However, in Tracey, the court held that because there was `no warrant, court order, or binding appellate precedent authorizing real time cell site location tracking,’ the good faith exception was not applicable. Tracy v. State, supra. As such, here, because there is no warrant, court order, or binding appellate precedent providing that one does not have a reasonable expectation of privacy in real-time cellphone location data, the good faith exception does not apply.
Herring v. State, supra.
As Wikipedia explains, in United States law,
the good-faith exception . . . is a legal doctrine providing an exemption to the exclusionary rule.

The exemption allows evidence collected in violation of privacy rights as interpreted from the 4th Amendment to be admitted at trial if police officers acting in good faith . . .  relied upon a defective search warrant -- that is, they had reason to believe their actions were legal (measured under the reasonable person test).
As Wikipedia also explains, under the 4th Amendment officers can “conduct warrantless searches in several types of exigent circumstances where obtaining a warrant is dangerous or impractical.” You can read more about that here.
The Court of Appeals then analyzed the trial judge’s holding that “there were exigent circumstances in this case that abrogated law enforcement's requirement to obtain a warrant.” Herring v. State, supra. It began by explaining that the trial judge
found there were exigent circumstances that relieved law enforcement of its duty to obtain a warrant. Warrantless searches and seizures are per se unreasonable under the 4th Amendment subject to only a few exceptions. See Katz v. U.S. 389 U.S. 347 (1967). One of these exceptions is for exigent circumstances. Lee v. State, 856 So.2d 1133 (Fla. Florida Court of Appeals - 1st Circuit 2003).

Here, the suspect was to be charged with murder and attempted murder. Law enforcement officers had a reasonable belief that the suspect was armed because they did not recover a firearm from the scene of the shooting. The officers also feared that a delay in the capture of the suspect could jeopardize the safety of law enforcement or the public. As such, there were various factors here that indicated exigent circumstances.
Herring v. State, supra.
The Court of Appeals, though, also went on to find that
when determining whether sufficient exigent circumstances exist, courts examine the totality of the circumstances. Seibert v. State, 923 So.2d 460 (Florida Supreme Court 2006) . . . . One such circumstance that courts look to is whether law enforcement had the time to secure a warrant. Lee v. State, supra (`Some set of facts must exist that precludes taking the time to secure a warrant’). `[I]f time to get a warrant exists, the enforcement agency must use that time to obtain the warrant.’ Hornblower v. State, 351 So.2d 716 (Florida Supreme Court 1977).

Based on the record before us, it appears that the State failed to present testimony to establish that officers could not have obtained a warrant during the 2.5 hour period at issue. Further, there was no testimony that the officers made an attempt to obtain a warrant or that they considered making such an attempt. Accordingly, under the facts presented, the totality of the circumstances does not demonstrate exigent circumstances to overcome the warrant requirement.
Herring v. State, supra.  The court therefore reversed Herring’s conviction.
This is one of those cases in which the exclusionary rule, which bars the use of unconstitutionally obtained evidence, exacts a high price. As Wikipedia notes, in the early years of this century, U.S. courts were beginning to adopt the exclusionary rule, over the objections of other judges, one of whom was the highly respected Benjamin Cardozo. His most famous comment on the exclusionary rule was, “[t]he criminal is to go free because the constable blundered.”  People v. Defore, 242 N.Y. 13 (Court of Appeals of New York 1926).

My sense is that this probably happened quite often before officers got used to abiding by the requirements of the 4th Amendment. The premise of the rule, essentially, is that a right without a remedy for the violation of that right is, in effect, no right at all.  One could, of course, argue that we could provide some other right, such as monetary damages, but the response to that argument is that in this instance the magnitude of the harm resulting rom the violation of a right eclipses money damages, i.e., incarceration for years or the death penalty require more.  A related argument is that by enforcing the exclusionary rule in hard cases like this we send a message to all law enforcement officer that emphasizes the need to follow the rules.  Here, as in many areas of the law, there are no easy answers.
You can read more about the reversal of Herring’s conviction (and his prosecution and trial that led to it) in the news story you can find here.

I'm a Nigerian attorney based in Nigeria. I am a regular reader of your blog as I've a keen interest in the convergence of law and ICT. I blog at- http://cyberlawmusings.blogspot.com/?m=1I find the Herring case rather interesting and would love to get the full report of the case. Please where can I find it on the internet.

In Nigeria, generally speaking evidence (with the exception of involuntary confession) appears to be admissible no matter how it is obtained. Therefore, a court may admit evidence which was obtained in breach of accused person’s right to privacy or fundamental right and the accused cannot urge the court to suppress or reject such evidence solely on the grounds that it was obtained in violation of his right. His only remedy may be a civil action for the enforcement of his fundamental right and claim for damages for his right that has been violated.

The US law principle of the fruit of the poisonous tree are unknown to Nigerian law.